The Making Of a Valentines Card 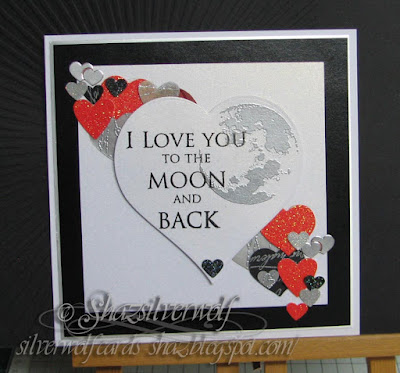 Well, I promised a blog post on it, so here it is.  It all came together fairly quickly, as the general idea had rattled around in my head over the weekend. Of course, the smart thing would to have got it made before I went into hospital, but lets not go there, hey?
Kept it simple in colours- Black, White & Silver, with a small splash of red at the end.
We bought the word stamp at the Hobbycrafts NEC last year, as it's a phrase special to us, we use it between us often. 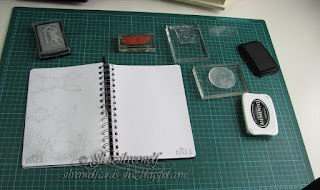 My Supplies: Silver Encore Pigment pad, Black Memento ink,- there was also silver EP and Black detail EP not in the picture- A Moon stamp from Lavinia Stamps,  and the word stamp from Inkylicious. The notebook was to try out the positioning of the moon & words, to make sure I could stamp it and die cut it with a heart shaped die.
I had a 7" square card base as a starter, and cut a silver cardstock square to fit the front, then cut a black pearl layer to sit on top of that.
Next came the stamping, and I first stamped the words in Memento Tuxedo Black, and then heat embossed with Black detail Powder, onto white pearl card.
Positioning the Moon stamp needed a bit of care, as I wanted it to fit easily into the heart, but not obscure the wording. 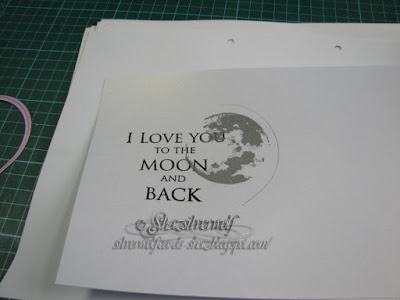 Here you can see I had positioned the heart die I was going to use after I'd stamped the words, and drawn lightly around the outer edge of the heart, to give me a guideline. 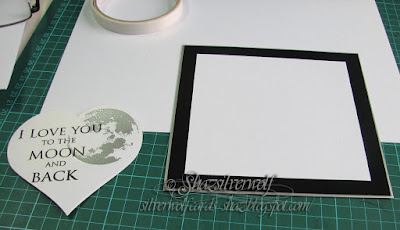 I stamped the Moon using Silver Encore Pigment Ink, then heat embossed using Silver EP. That did actually cover the lettering in a couple of places, but I used a finepoint Black marker to bring the letters back.

The heart shape is from a set by Nellie Snellen, and is the largest die of the set. 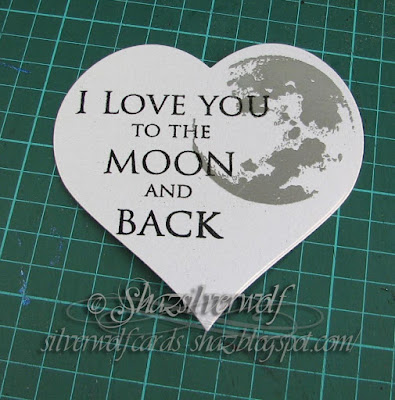 I was intending to add a white card layer slightly smaller than the black one, to leave a narrow border, but then I looked at the white offcut that I had die cut the focal heart from, and it made a pleasing layout with  a larger black border, so I went with that.
I'd already pictured that I wanted a sort of sweep of hearts from one corner to the opposite one, so set about sorting some out. There are a various sizes, some punched, some small die cuts, all from oddments of glitter card/ stamped card or paper and vellum.
I lay out my small hearts,roughly lining them up to opposite corners, then used some dabs of silicone glue to adhere them, so I didn't have to unassemble everything. Finally added the main Focal Point on top, using some foam pads. 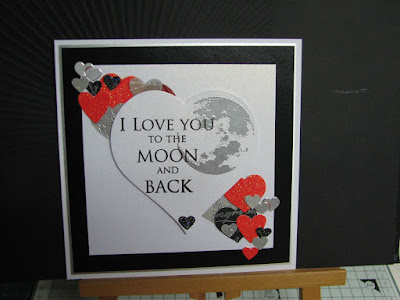 What a lovely card - and all the more special since the words have a special meaning to you both!

the words are fabulous, and so is the card. good to see you able to make it, too!

Lovely card Shaz and thank you for sharing how it came together.
Toni xx

Fiona@Staring at the Sea said...

It's a gorgeous card. Always interesting to see how others approach a card. Hope you're having a nice restful weekend.

It's a gorgeous Valentine card, and how marvelous that you found a sentiment stamp with such a precious wording that is special to your life! Hope you are doing well & recovering just as expected! TFS & Hugs & prayers.