Well here we are again, sailing ever closer to the magic 6th Birthday edition, and of course, ever closer to the Birthday Crop. For those who've been living under a rock for the last few years, if you want to know what this is all about, head over to The Stamping Ground, where our Leader of the Desks, Julia, will fill you in. Politely, of course.
Stuff on this weeks desk then. And I have to admit, this is (slightly) staged, as the desk shot I took earlier benefited from the sun pouring through the window, which I admit was lovely, it just threw everything into shadow, so you couldn't actually see anything much. Not what you visit for. 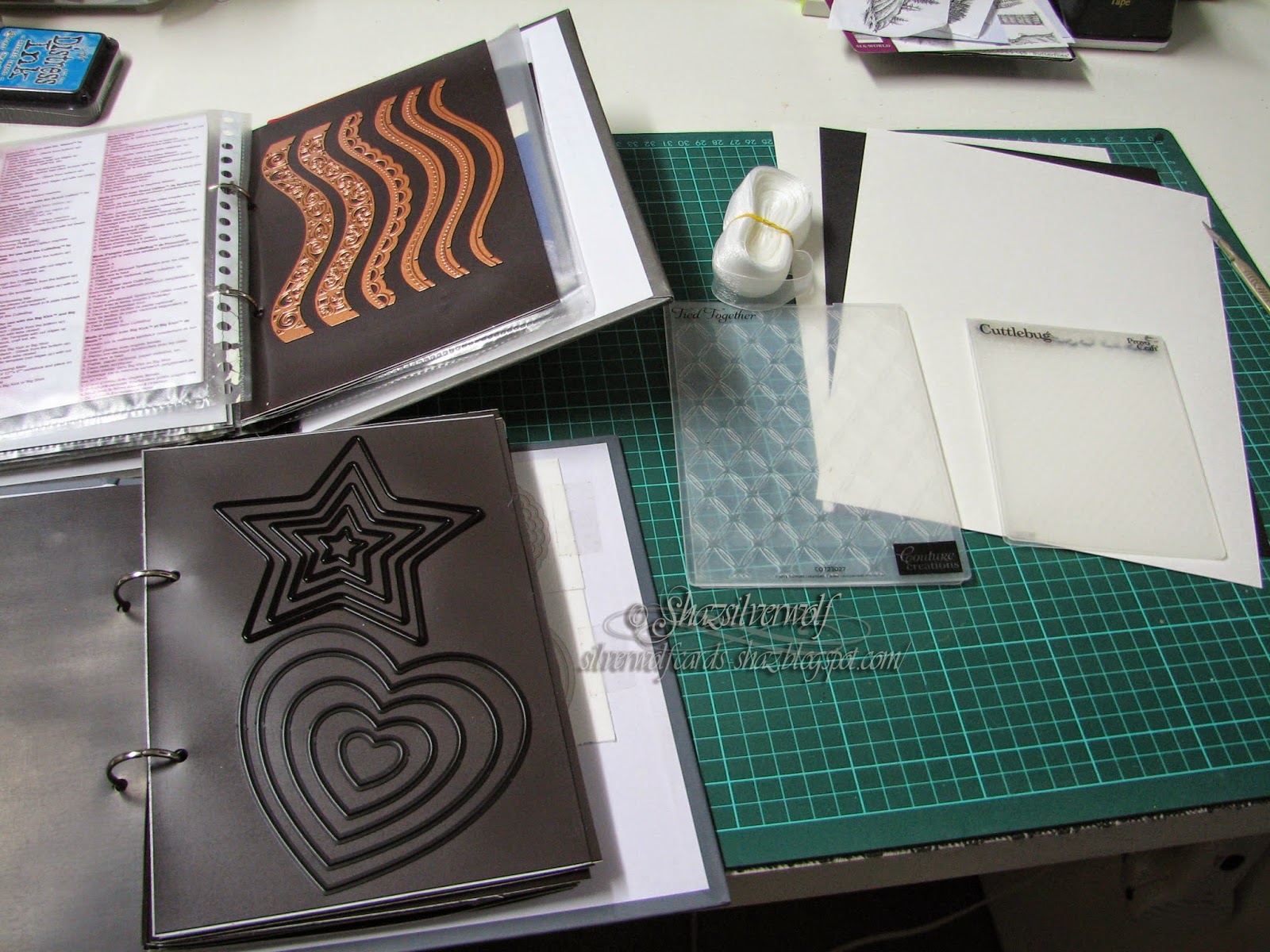 What this will become, through the magic of getting my a$$ in gear, is a wedding card.
I have a plan, I really do, and an image in my head. Darn, that's one brave image, its weird and scary in there, for a poor little idea out on its own.
I've seen lots of cards on Pinterest that used the shaped Edgebilities- our own ShazinOz's being some of them- and was suitably enabled into buying some.There will be much embossing involved, along with fancy edges and die cut hearts, as you've probably already figured out.
That will all start later today, as this morning I have to go for a CT scan. I'm guessing the MDT meeting went ahead yesterday with just the MRI results, as they are the most detailed of the two scans.The doc we saw a few weeks ago forgot to book the CT at the same time as the MRI, which is why it's a week later! So now we're waiting for an appointment to see the surgeon to find out the results of all the poisoning I've had over the last 12 weeks.
Regarding the Birthday ATC's, I'm up for sharing, so anyone who would like to swap with me, just leave me a message in the comments, and e-mail me your snail mail addy. We will be going to the crop, so if you are too,we can swap there.
By shazsilverwolf - April 29, 2015 27 comments:

So another Wednesday, and another week flashes before our bewildered eyes! Honestly, where do they all go so fast? Time to link up at Auntie Julia's at The Stamping Ground,again, for our regular browse around the worlds desk/tables/floors of crafting delight/mayhem/madness. 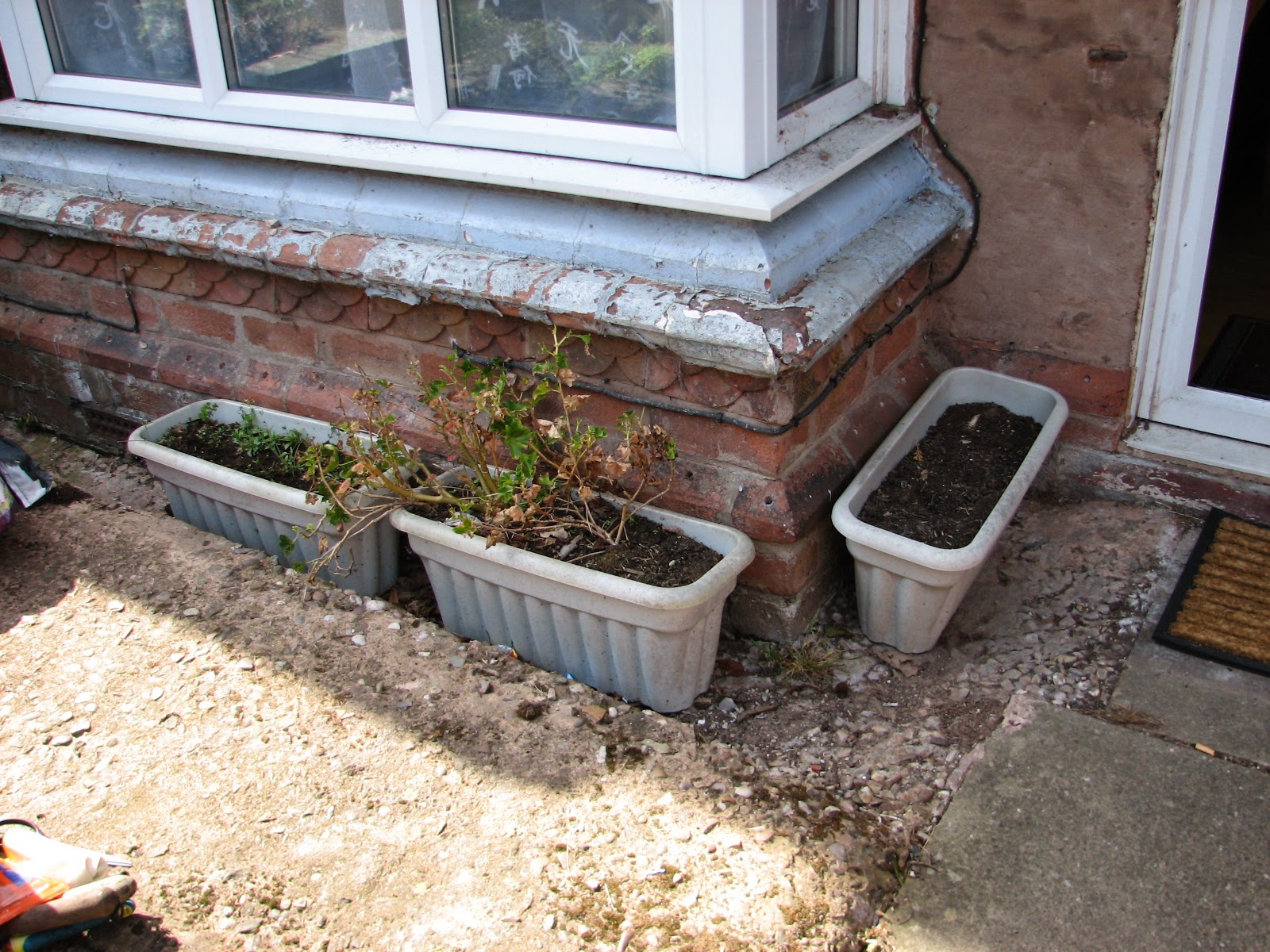 Total lack of desk picture this week, as the weather has been so gorgeous,I've been out doing a little light gardening.Thursday was spent replanting some planters at the front of the house. This 'before' pic though, does actually demonstrate what a very mild winter we had this year- geraniums still growing happily away, despite being outside all the time. They did get pulled out though and replaced,as they had gone very tatty and leggy. 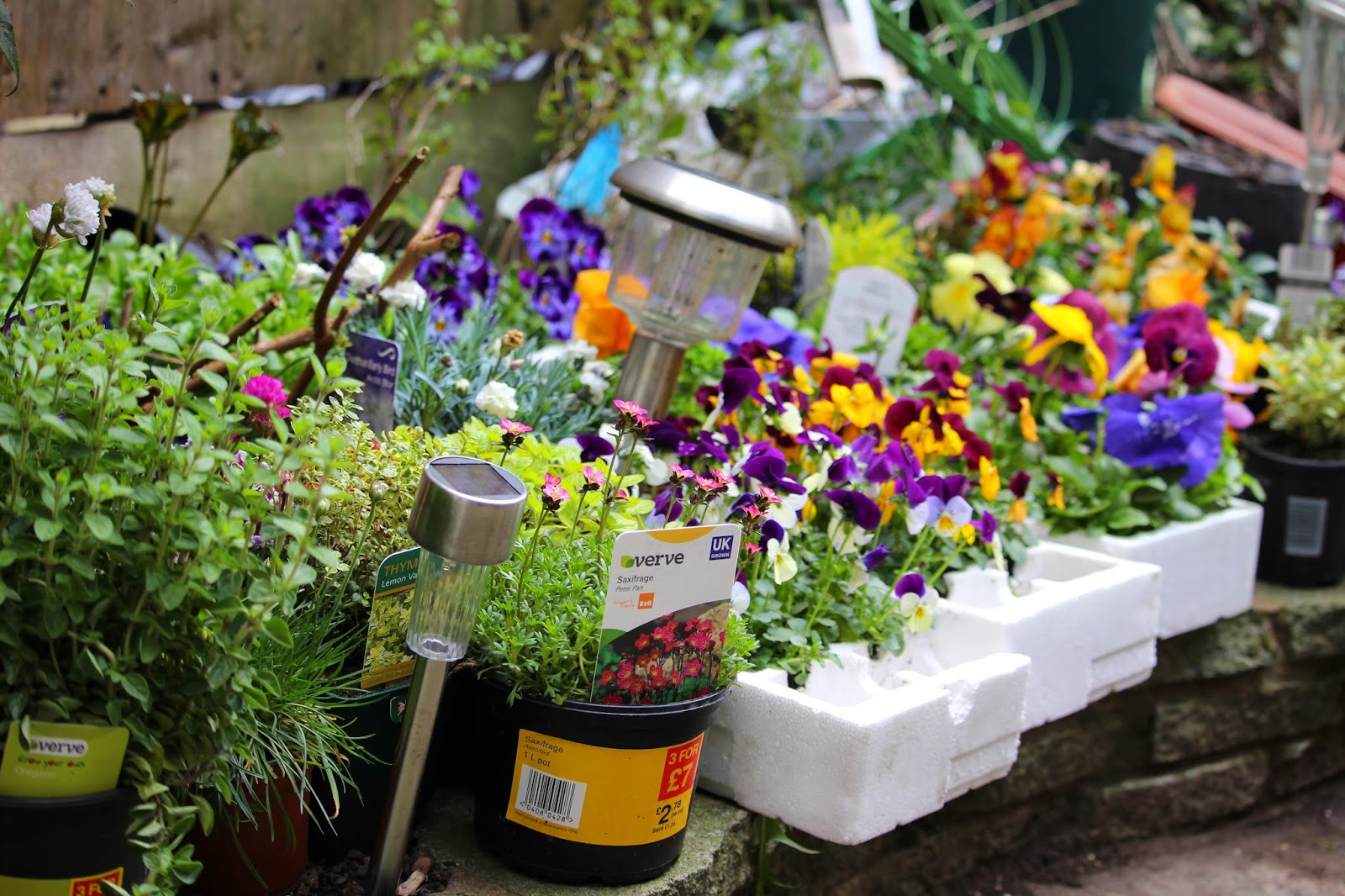 Quite a selection of Pansies/Violas/Lobelias to go in them. As well as some new geraniums and a few Fuschias.


All planted up a few hours later. 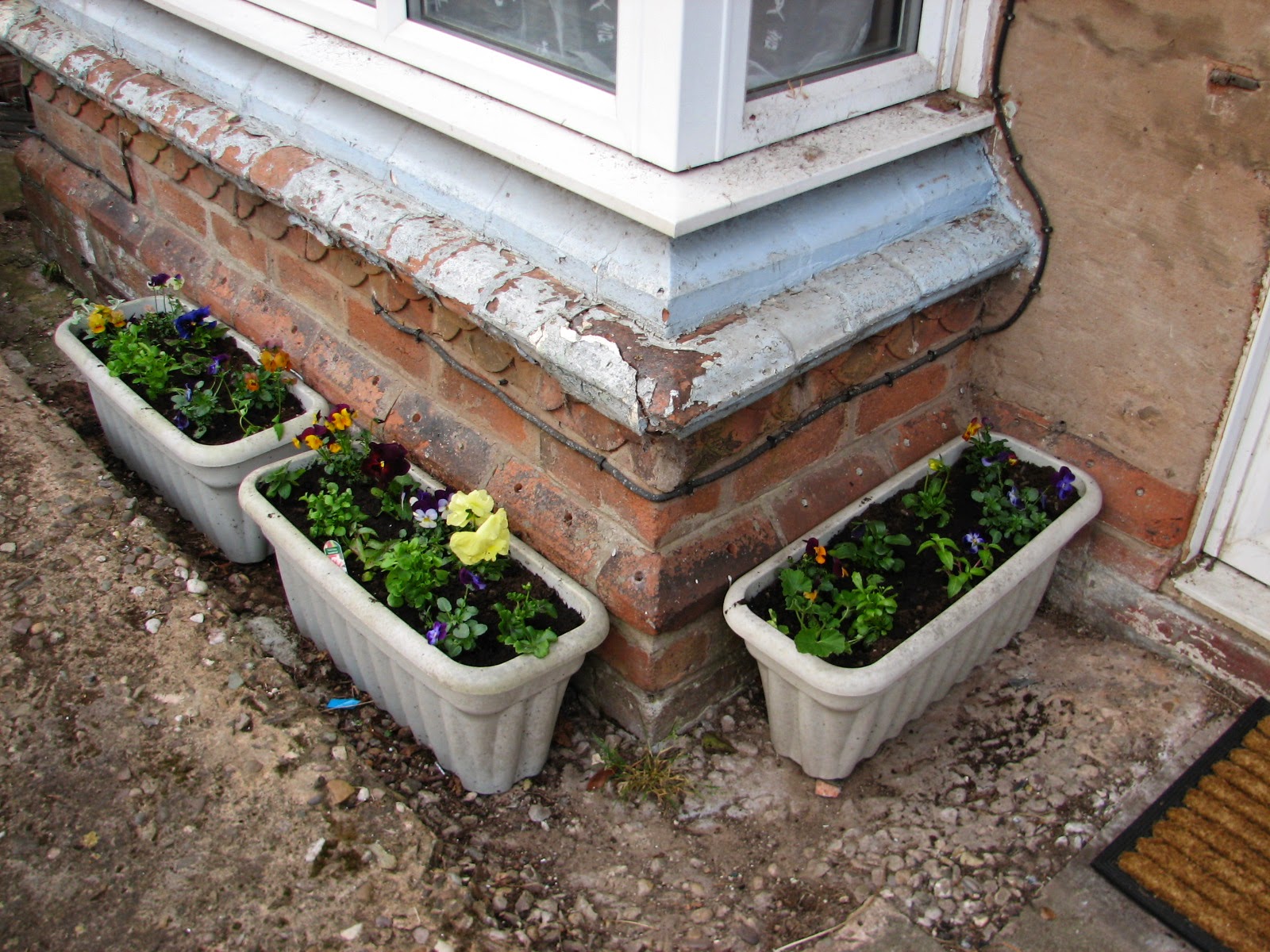 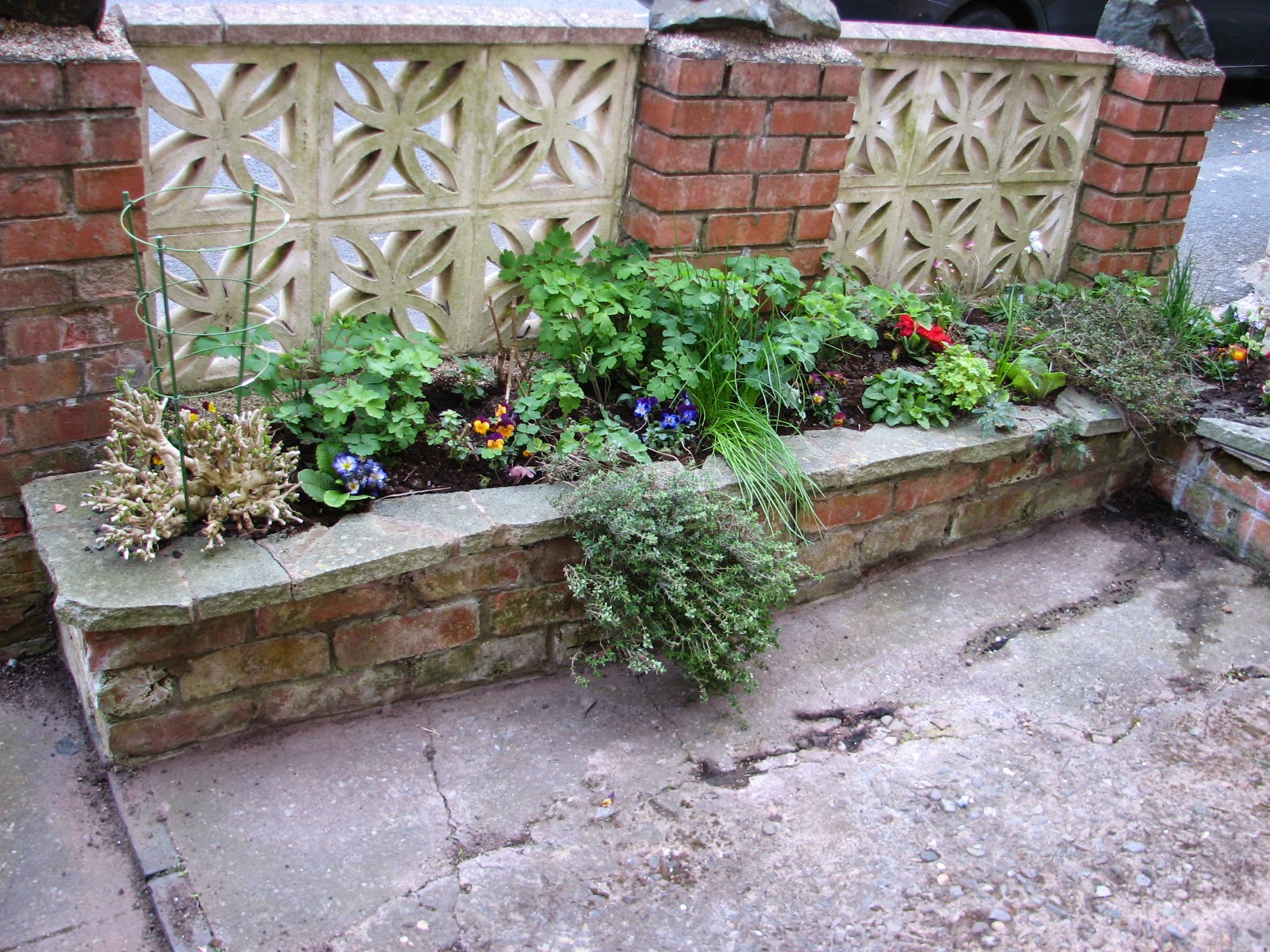 As well as adding a few new plants to the brick built bed. The plant that looks like a lot of dead sticks on the extreme left is a Rue- Its been there for about 8 years now, gets cut down like this every year, and comes back bigger every time.

Final job in the garden, which I did on Saturday,was a bit sad, as we wanted to place Ambrose's ashes in the back garden. He used to spend most of the summer sunning himself below the Yew tree, as it has a bank of soil in front of it, and gets full sun all day, as you can see.So that's where his final resting place had to be- lay in the sun all summer. 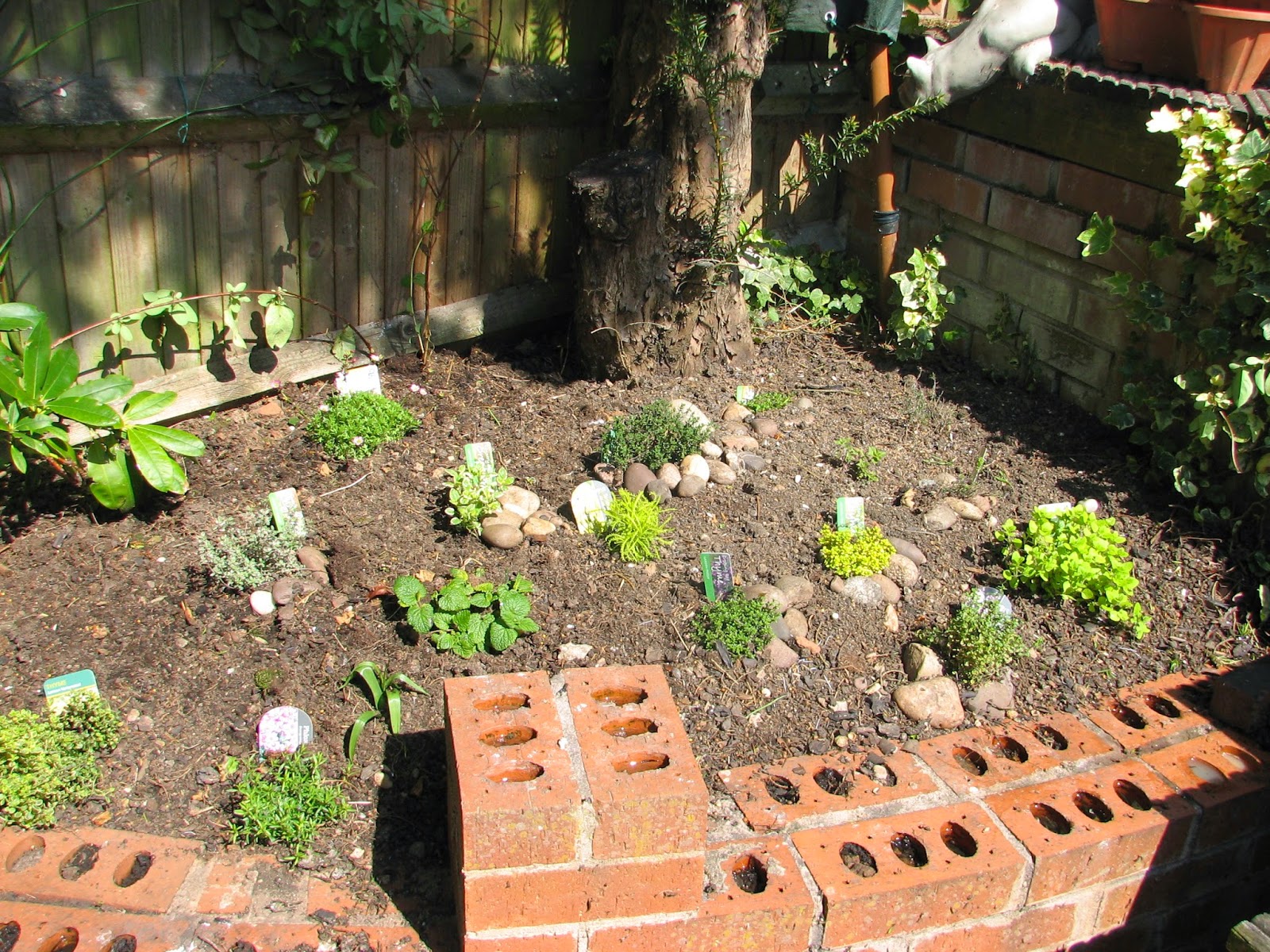 The wall is yet to be topped off, when we decide what we like- we have a long garden, about 150 foot of it, and Beloved Hubby is building a raised wall all down both sides, to give us low maintenance flower beds. No good having a ton of lawn to mow, when we both work full time, and have other hobbies too. So the path will be shale/gravel, and he's going to build some raised beds at the bottom as well to grow veg and salad stuff, and somewhere we can sit/have a barbecue. Back to the Yew tree, after we put Ambrose's ashes in the ground, I started planting herbs there- Thymes, Marjorams and Oregano's, all of which should thrive in the hot,dry poor soil! Adding stones as I find them around the garden, to recreate as far as possible how they like to grow in the wild. There is also a couple of Alpines which like the same conditions, and some Lemon Balm. That herb has the most amazingly lemony smelling leaves when crushed, they're gorgeous. It also grows quite happily if it has even the tiniest amount of soil anywhere near its roots! Seeds itself happily too- not too madly, just enough. So I have a few clumps around the garden- anyone going to the crop would like some, let me know in your comment, and I'll bring you some along.
I had my fourth IV on Friday, all went well. I've updated my cancer page with how things are doing.Can't believe how much better I feel this week, after that infection & Hay Fever. Those planters I did out the front last week, after each one I had to have a sit down and rest. How ridiculous. Thats the sort of limiting thing driving me nuts. Last year I could have spent all day in the garden and not been tired. Now? A two foot planter can keel me over, lol. Anyhow, on Thursday I have my MRI, hopefully they will have an MDT meeting on Tuesday about it, and if things go as they have before, I'm hoping we'll be seeing the surgeon a week on Thursday, to find out how its gone. Fingers crossed this has done the job, really want to get this surgery done now. I'm bored with all this!

Email ThisBlogThis!Share to TwitterShare to FacebookShare to Pinterest
Labels: WOYWW

Wednesday again, half way through April, and not long till the Crop! All of us being kept in order by Our Head Desker, Julia, over at The Stamping Ground.On to this weeks desk then, and not a lot to show, I'm afraid. I was missing last week, and hardly managed any visits the week before, thanks to a wonderful cold that blew up into a chest infection. Cue course of antibiotics, which did exactly squat- by last Tuesday I was literally dragging myself from chair to chair, I was so weak, and struggling to breathe. Back to docs for new course of antibiotics, and some anti histamines, as now I had hay fever on top! I do get it this time of year from the fruit blossom on trees, but really didn't need it on top of the chest infection. Anyway, I'm feeling much better now, we finally seem to have got on top of it. So precisely nothing has happened on my desk in the last two weeks.

The unmounted stamps I had have been coated with TIOO, and have lay on the mat ever since.I will put them away, one day soon.


I did manage one lucky purchase though. I'd been watching Stampscapes videos (again), and Kevin had been working with Stampbord, and the scraper tools. There is a sharp pointy one, a blunter spoon shaped one, which I have something similar to, and a sort of scratchy brush. So I had a look for them and found the set on Amazon (and elsewhere) for £28! I did find the toolkit on Chocolate Baroque for £19, but even that's a bit steep. No way was I paying that much, I'd manage without first. Then I had a quick look on E-bay, and amazingly, someone on there had one for sale, with an almost full pack of ATC sized Stampbord pieces, for a fiver. Put in a bid, and got it for £6.50, and she emailed me and asked if I wanted another pack of ATC sized pieces for an extra £4- total bargain. It even turned out they were the 16 piece sized packs, which are £12 on their own! I was actually expecting to get the 5 piece packs, so that was a real surprise. 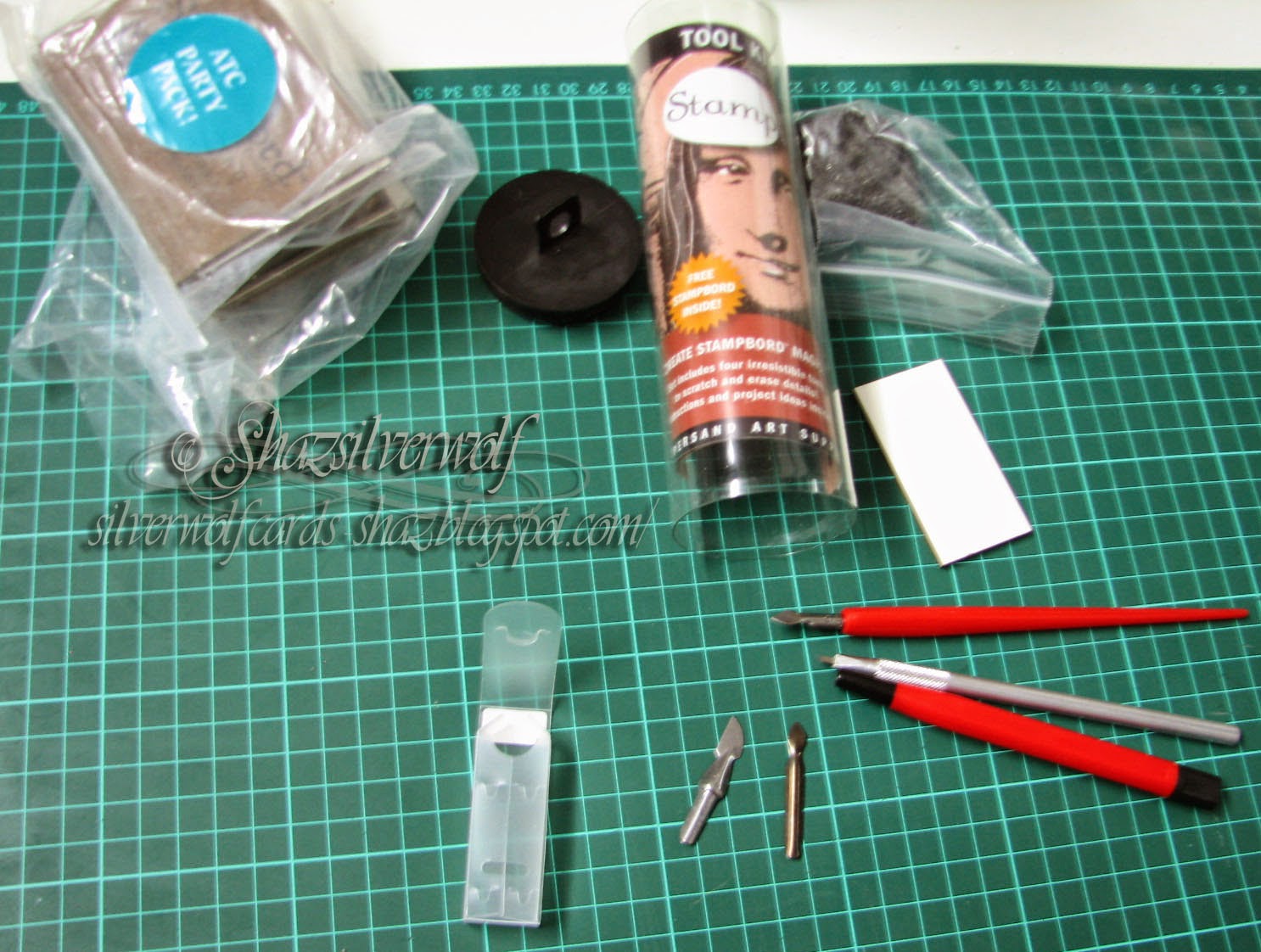 In the actual kit: A bit of steel wool, a spoon shaped tool, a handle with two other interchangeable sharper pointed blades, a wire brush type scraper and a single domino sized piece of Stampbord. Way overpriced, if you ask me. Anyway, that's me for now. This Friday will be my fourth, and hopefully final IV treatment. That's actually gone past really fast. On the 23rd I have my MRI scan, and that will get looked at in the MDT meeting on the 28th. Fingers crossed this has shrunk it as much as it needs to be, and we'll be on to the surgery.
By shazsilverwolf - April 15, 2015 26 comments: 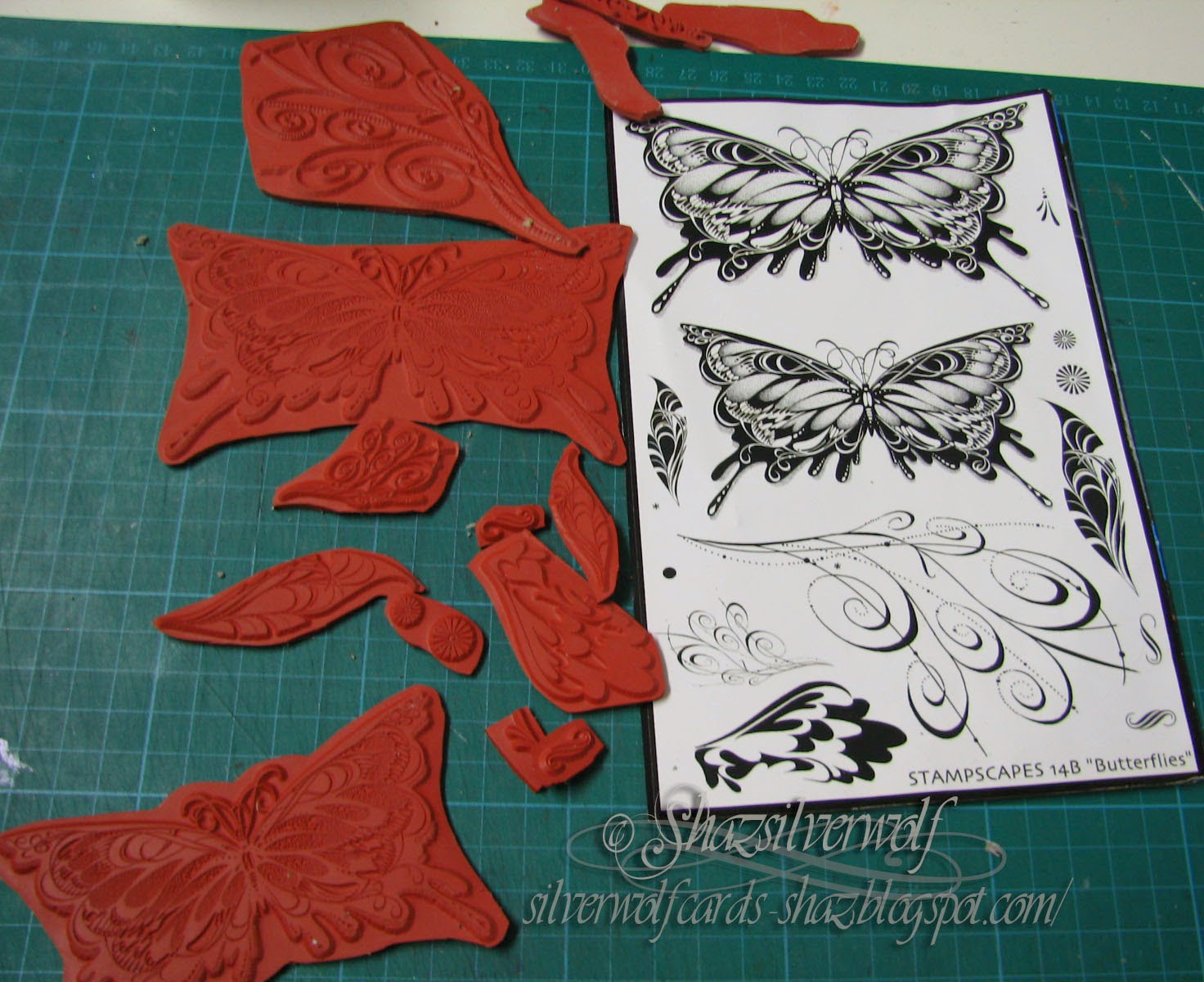 Not a whole lot of exciting stuff this week for our regular Wednesday stroll around the worlds desks, thanks to out fabulous Hostess, Julia, over at The Stamping Ground.
Just a couple of stamp purchases off E-bay, this one an old Stampscapes set, called Butterflies. One of Kevins 'art' stamp sets, rather than a scenic one.


The second stamps are both by Jenny, The Artistic Stamper. 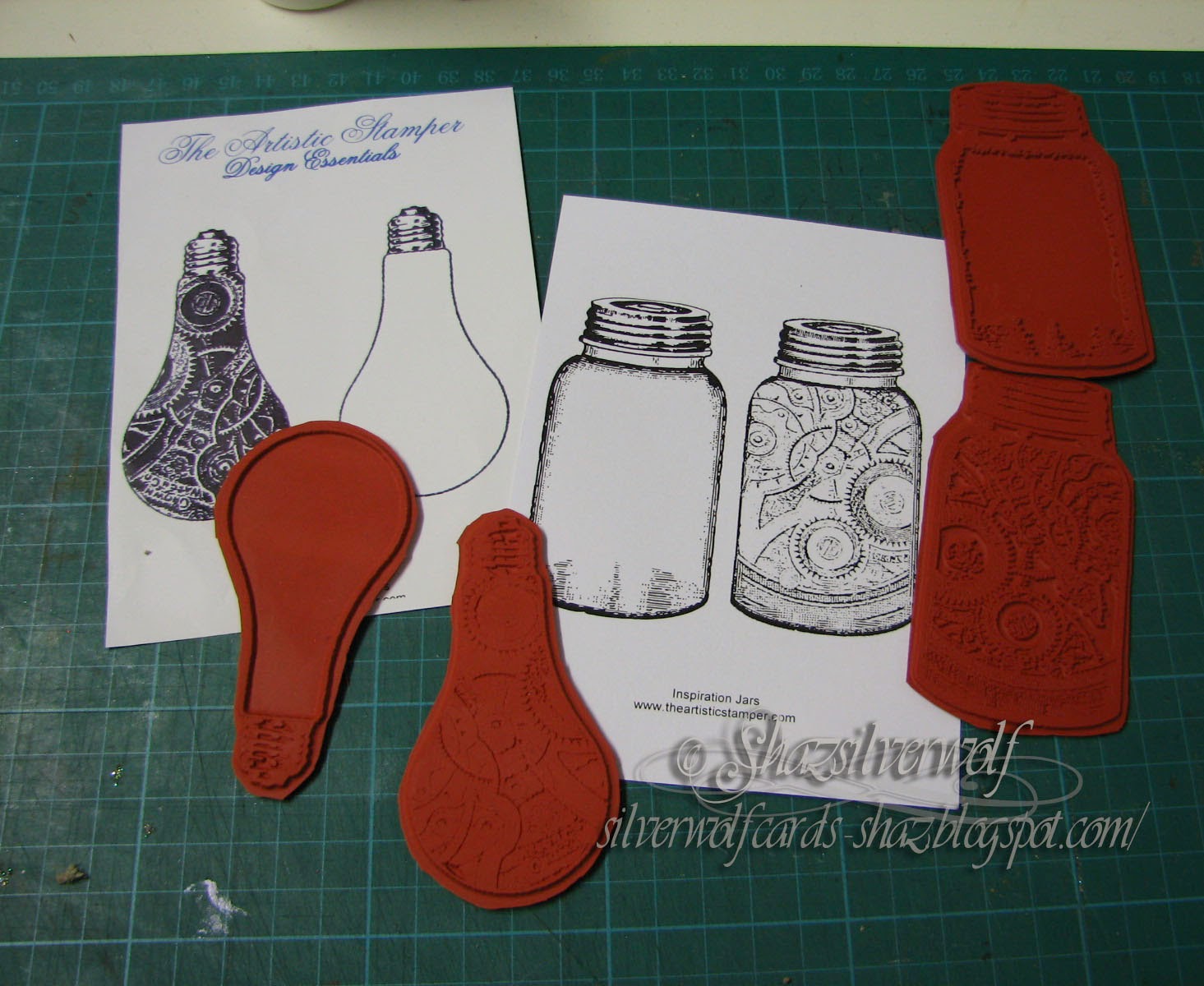 I wanted these two sets more for the 'empty' image, than the steampunk one, but no doubt those two will also make an appearance somewhere.
In case anyone isn't yet aware, Shoshi did finally get her surgery on Friday, but apparently it was almost cancelled again, you can find all the info over on her blog, as she has a friend co-hosting it for her whilst she is in hospital.
I also did get my treatment on Friday, so my cold germs didn't get in the way. Not feeling too bad, in fact, I think if it wasn't for the leftover cold, and me being a bit silly and overdoing things on Saturday, I'd actually feel better than I did after the second one. Saturday was entirely my own fault, I know it was only the day after my treatment, but we had a family wedding, and I didn't want us to miss going. Spent far too long on my feet, between the wedding in the afternoon, and the evening reception, so at the moment, I know 2 week old babies with more stamina than I've got.So, very short and sweet this week, I'm off to make myself a cup of Bournevita, and have a lounge on the sofa with a craft video or two before bed- me and that sofa are bosom buddies lately, lol.
By shazsilverwolf - April 01, 2015 20 comments: