I take no credit for this discovery, a lady posted this on Pinterest HERE.Like any of us, I hate having to spend money on 'consumables', and new 'bug plates are not cheap, are they? As one of my 'B' plates was quite warped, and full of bits of paper stuck in the cutting marks, I thought I'd give it a try.
This was my 'B' plate before: 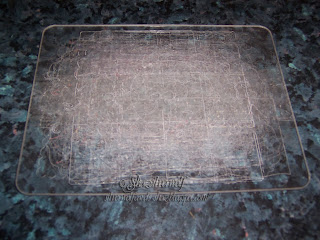 I don't think the bend in the plate shows up at all, but it was quite bent, despite keep flipping it when I used it. 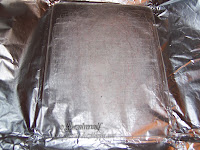 So I wrapped it up, and I used a good quality thick foil for it,and put it on  a tray, with 2  pyrex dishes and a stone lasagne dish on top. 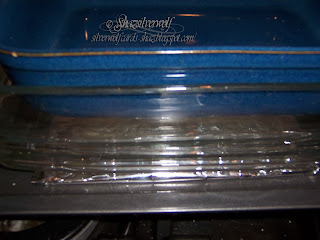 She doesn't say if she had a fan assisted oven, so to be on the safe side, I knocked 10 minutes off the cooking time. When it came out, I left it to cool, then unwrapped it. The result was pretty flat, although the heat had got to a couple of the corners.
So I wrapped it in a second coat of foil, and as I was about to cook Toad in the Hole for dinner, I waited till that had finished, then put the tray back in the oven after I had turned it off, and just used the residual heat of the oven. 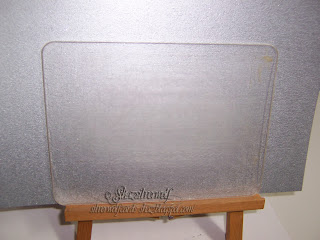 And this is my 'B' plate now- nice and flat, and all the bits of paper have dropped out. 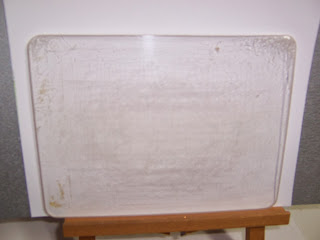 Bit easier to see against a white background- you can see the top two corners felt the heat a little too much. I'd recommend putting two tin-foil coats on it, more if its a cheaper thin foil, (which is what I normally buy from Poundland, lol, only got the Bacofoil 'cos Tesco had it going cheap!) and maybe some extra on the corners too. But it really does work! Makes them nice and flat again, and pops out all the paper. You still have the cutting marks, but that doesn't affect how they cut. 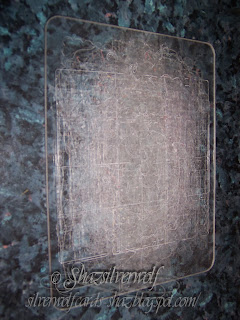 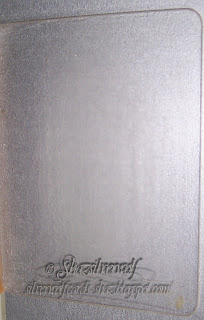 That was very brave of you. I should try it on mine.

what a great tip and nice to know it's worked!

Well done Shaz. That is a great tip, I shall have to try it on my BigShot plates!!
Lynn x

Wow thanks for the advice, I will give it a go for sure.

My name is Cindy said...

Brave girl. But as I have been thinking about replacing them there's not much to lose is there? Might wait till after Christmas to try this one tho!! BTW when I did replace my C plate because it snapped in half (truly!!) I didn't buy a branded plate I found someone on ebay who made them. Works fine at a fraction of the cost. Cindy x

worked a treat for me thank you

I have never done it, but I have thought many times about putting it in the microwave but I was afraid it may break the microwave.