Wednesday again, and here we all are, almost at the end of January. Where'd that month go?
This weeks desk, I admit, is being done on Tuesday afternoon, as tonight we are off out to a concert- Slipknot and Korn at the NIA, Birmingham. So nothing will be happening desk wise tonight. As always, the reason for the desk shot is our weekly gathering over at The Stamping Ground, where our much loved leader, Julia, attempts to keep us all in order. Three pics, and yet more retail therapy! And I have to say, I would not have been buying any of this, had it not been for a rumour, which I checked out and found to be correct, that Ranger are discontinuing the Adirondack line of pads and re-inkers. You will see the connection in a minute,I promise!
I came across mention of this on SCS, and e-mailed Ranger to ask the question, the reply I got back was Yes, all the Adirondack line, apart from Alcohol Inks, are being discontinued. They are putting out the Paint Dabbers under the Ranger name,and launching a new line of inkpads. I had a look at the first 12 colours on the CHA release, and some do look similar to Adirondack colours, some are definitely new. But they are all, so far, very strong 'brights', none of the paler 'lights' amongst them. So off I went in search of as many re-inkers as I could find to complete my collection. Countryview Crafts carries some, and Susan, who runs it, has very kindly ordered me the ones she doesn't carry from Ranger, which I though was fantastic customer service. I also found a few on Amazon.co.uk. The result was that whilst I was on Countryview Crafts site, I saw her January Sale section, and a bunch of stuff just fell into my basket, on the reasoning that they were extremely cheap,lol! See, I told you there was a logical connection here. 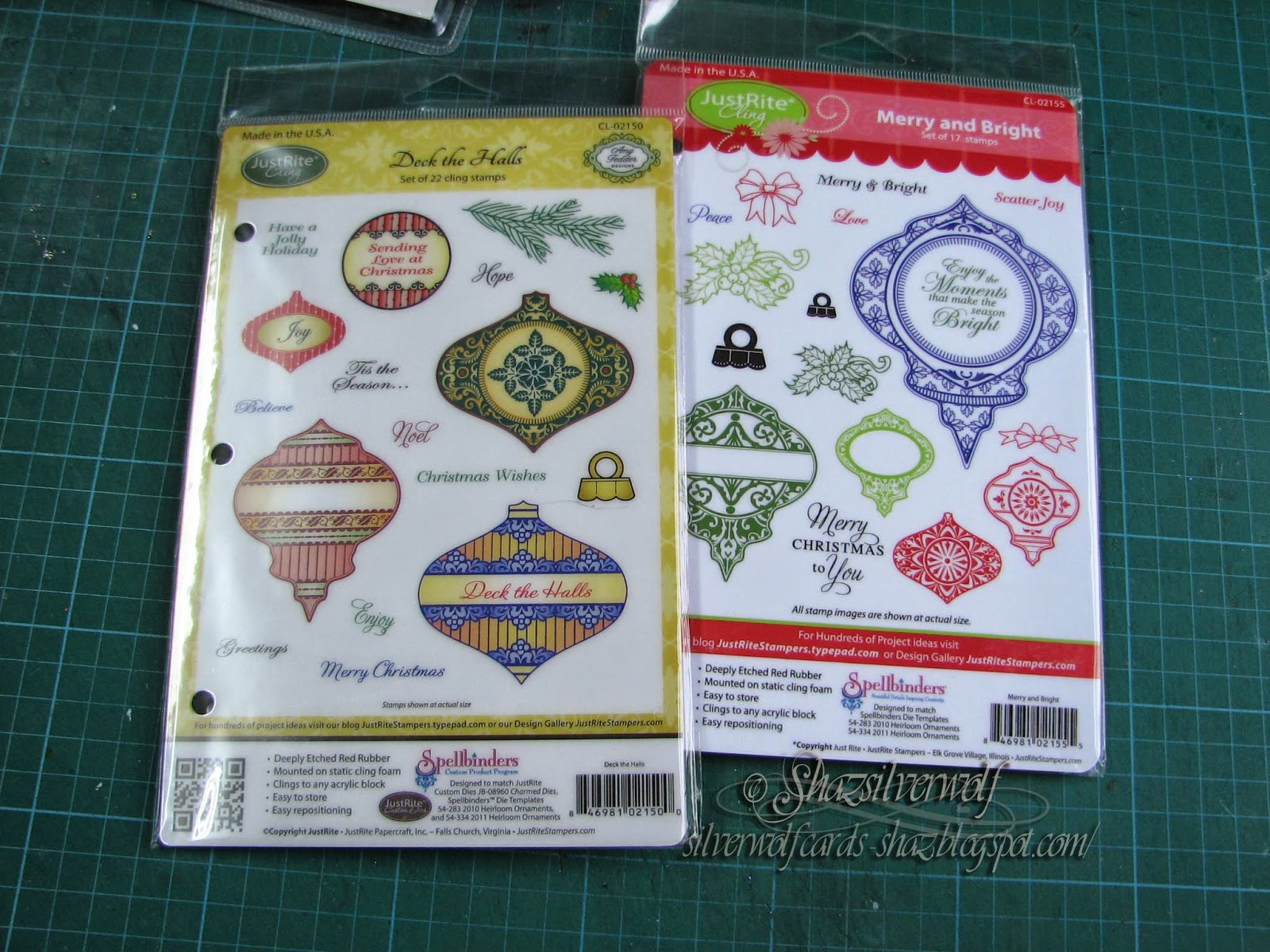 First pic, some Sizzix dies, a Nesties Decagon die set and an M-bossabilities folder.Second pic is two stamp sets, and these are designed to work with the Nesties Heirloom Ornaments dies, 2010 & 2011 editions, both of which I have.
Final pic is back to embossing folders- Tim Holtz Debossing Christmas Words, and a Sizzix/Hero Arts pair of Snowflakes. 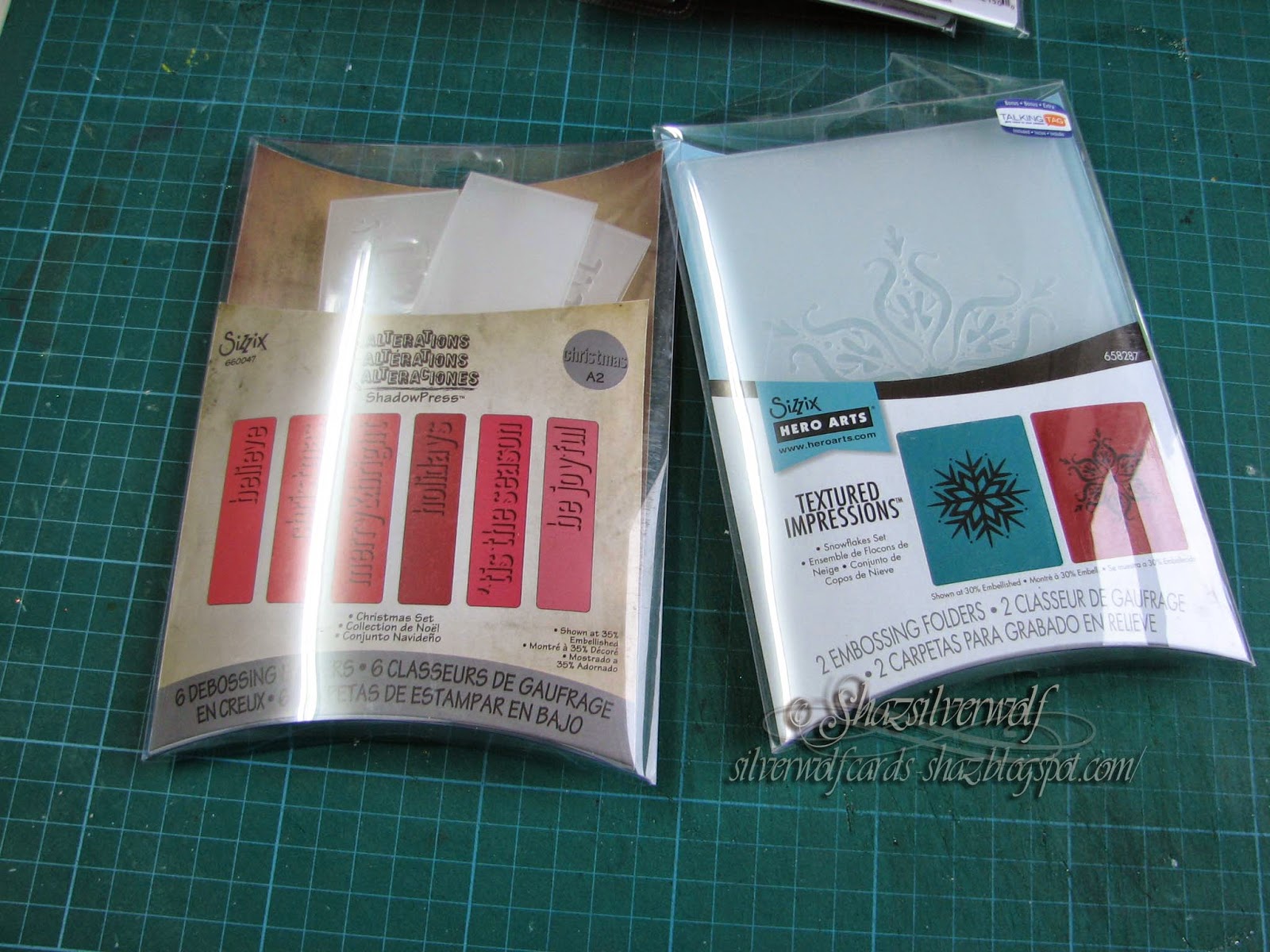 That's the trouble with Internet shopping- its far too easy, lol. Sitting in front of your pc with a nice coffee- warm,dry and comfy.

Now a quick mention of how things stand with me, and I am a very Happy Bunny today.  Yesterdays appointment with the Oncologist yielded way better news than I expected. I was fully expecting a tough course of IV chemo, and  losing my hair to it. The result is my IV chemo will be one two hour infusion, followed by two weeks of the same chemo tablet I had before, then a one week break. That's a cycle, and I have to have four, so it runs for 12 weeks in total. I really expected the IV chemo to be a lot more than this, a lady I know had it for a different cancer, last year, and hers was 8 hours a day for five days at a time, so I feel I'm getting off lightly. The best bit though, is that my chemo again does not cause hair loss. You have no idea how much of a boost that has given me. I do know that in the scheme of things that really should be a minor detail, but for me, it isn't.  I think that its partly because this cancer problem still does not feel real. I don't feel ill, in fact the only problem I've had has been caused by the treatment, rather than the disease. So I find it hard to 'feel' like there is anything wrong with me at all. We also got to see the scan images, the first one from back in August, and the one from January. You can see shrinkage in it, so the radiotherapy did something, but its just bigger than the surgeon would be happy with removing. I also saw the coding T4,NO,MO on the screen, and did some research when I got back. According to the Cancer Research website, which lists all the codes used for cancers, this means that it has grown through the bowel lining, no lymph nodes show any cancer cells, and there is no spread to other organs, so this puts mine at stage 2B. That was another boost, as the stages are 1-5,with 1 being the lowest, and given how large it had grown, and that it could have been there for a very long time as I'd had no symptoms, I will be honest and say we seriously did not expect my staging to be lower than 3, and more realistically we were expecting a 4.
Well, I'm done now, so have a great Wednesday, and I will catch up with you later today. 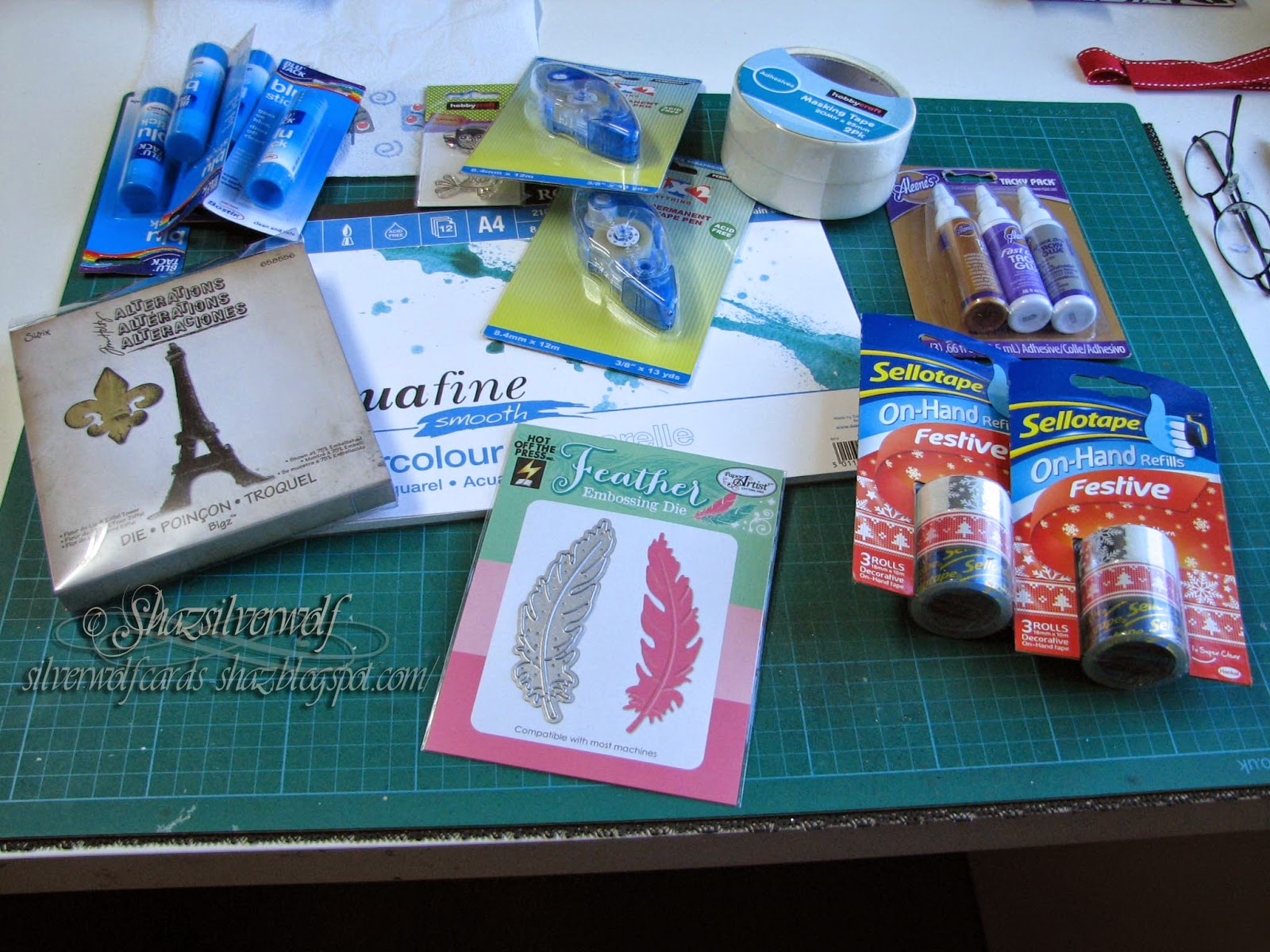 Well my desk finally has something different on it, even though its only new stash! Doug decided we needed a few hours out of the house, and as we also needed wild bird food, we drove over to Webbs Garden Centre, about 20 minutes away from us. Its quite a big, award winning centre, and there are coach trips all year to it from all over the country. It also has a Lakeland on site, an Outdoor gear centre, one for hot tubs, as well as a Hobbycrafts, and the Garden Centre itself is huge, with an amazing selection of stuff,an Aquatic area as well as a vast range indoors of all sorts of home/giftware. I did have a browse in Hobbycrafts, strangely enough, and for once came away with a few bits. One thing I wanted was some smooth watercolour paper, to try out my Brushos with some stamping. Got that, check. Some low tack masking tape, a couple of glue runners, the Stix2, I've tried Hobbycrafts own brand and didn't like them. Doug picked up some Glue sticks, called Blu sticks. Goes on blue and dries clear. 50p each. Bargain.I spotted a 3 pack trial size of Aleenes glues. I already have the Aleenes Tack it Over and Over for my U/m stamps, and love it, so thought I'd try some more in the range. Not a big user of 'wet' glues, but sometimes its what you need- these three are Tacky glue, Fast Grab Tacky and Quick Dry Tacky Glue.
The three pack Sellotape rolls were Christmas stock being sold off, so ready for next year. Assuming that I a) remember I bought them, and b) can find them. To be honest, neither option is very likely. A Tim Holtz die, Eiffel Tower and Fleur De Lis,which was £6.50, and as that's generally around the £12 mark another bargain. The feather die was a freebie with a crafting Magazine I spotted earlier in the day in Tesco.There is also a clear stamp there with a cute little bird and an owl.I have to say that over the last couple of years I've become disenchanted with Hobbycrafts- I generally rarely come out with anything other than adhesives- and this trip wasn't really much different, apart from the Bigz die.  To me, it seems like Hobbycrafts try to cover too much ground, and fall down, especially in cardmaking, by having a bit of everything, but not a lot of choice overall. For instance, they had only 4 different Bigz dies, and I think I counted 8 Nestie sets. But that's just my take on it. 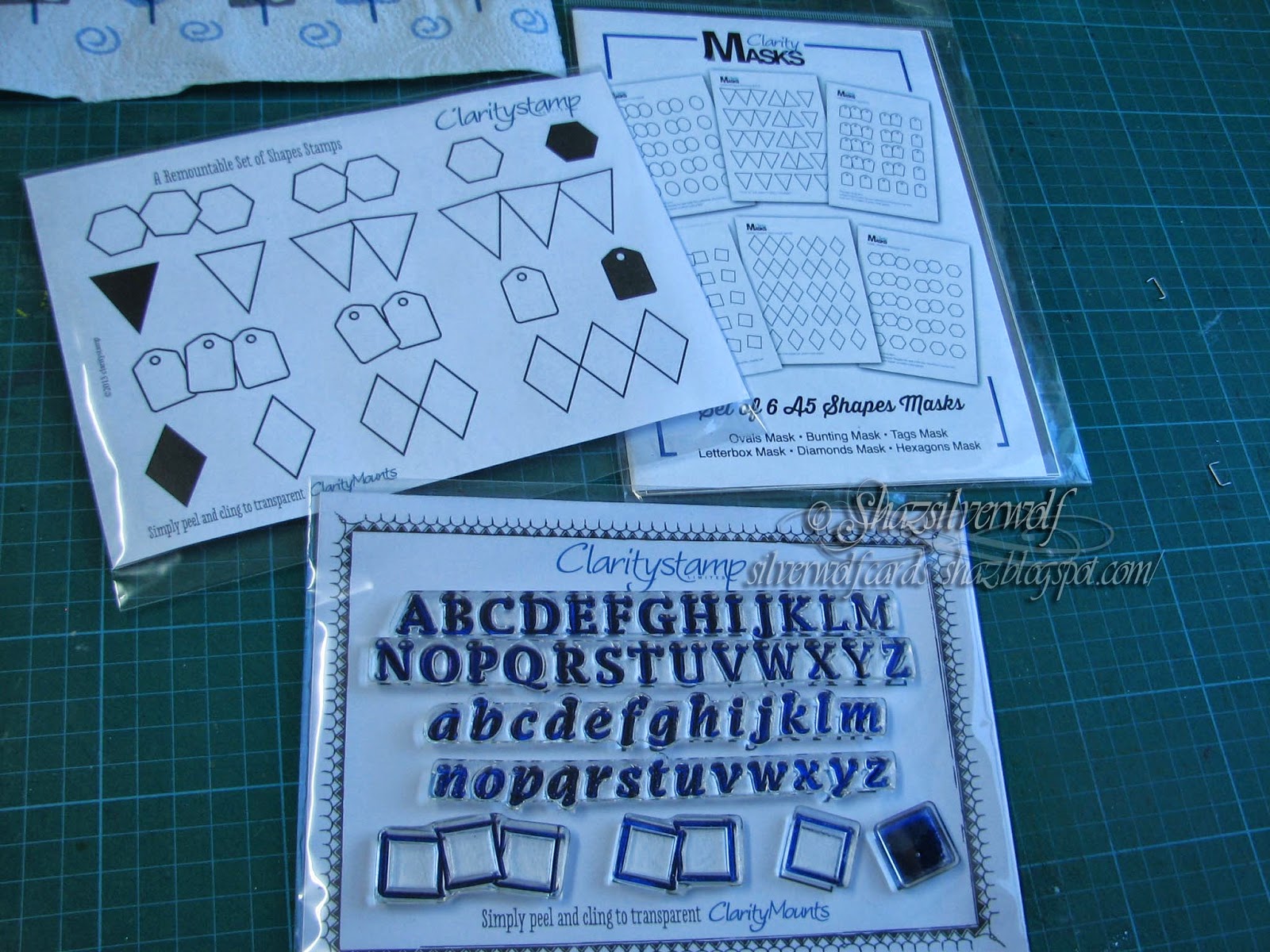 The other items on my desk were a present from Marg, Silvercrafter, who brought them over to me last week. Clear Clarity stamps, as you can see, geometric shapes and bunting, as well as an Alpha set. I love the fact that the shapes have a 'positive' stamp, as well as open ones. The other pack is matching masks for the geometric shapes. Inky fun will be had very soon, I'm sure. Thanks Marg.
A final note for you, I had my scans a couple of weeks ago, and a meeting with the surgeon last week. Mixed news, to be fair. Firstly, and the real positive from this, is that the cancer has not spread to my Liver or Lungs, its just confined to the rectum. On the downside, the radiotherapy has not shrunk it by as much as he would want before removing it, so I have to have another round of Chemo, this time IV. Don't know when yet, waiting for the Oncologist appointment to come through, so will have to wait to get more details of how often/when/how long for. The good side is that it will be at our local hospital, which is only a 10 minute drive away. Like I said, not what we wanted to hear, so a bit disappointing overall, but the news that it hasn't spread is fantastic.
Have a great Wednesday everyone, and if you are new here and wondering what its all about, get yourself off over to our Head of Desks, Julia, at The Stamping Ground, and join in the snooping!