So, it's Wednesday again, and three parts of the way through March already! Soon be Crop time again, yay! A browse around the workdesks of the world, courtesy of our Head Desker, Julia, at The Stamping Ground. On my desk this week, a few purchases made at the NEC Hobbycrafts show last Thursday. I went along with Marg, Silvercrafter, and met up with Debbie, Tattered Rocks. Just as well I had such wonderful company, as the show itself was a huge disappointment. I've been to the March one before, and know its not as big as in November, but this one was tiny! Very few visitors on Thursday too- if you've been to the November one, you know how much of a crush it is, and how difficult it can be to get around. This one felt almost deserted. Biggest complaint I heard from people walking around was that the organisers dare to charge the same for this show as the Christmas one, when it's only a fraction of the size. So that was definitely my last spring NEC show. Well, what did I get then? A Clarity stencil, of random sized boxes, a Sweet Poppy stencil for Christmas, and 3 sets of Clarity 'Wee Folk' stamps, which I think will go well with a lot of my scenic stamps. 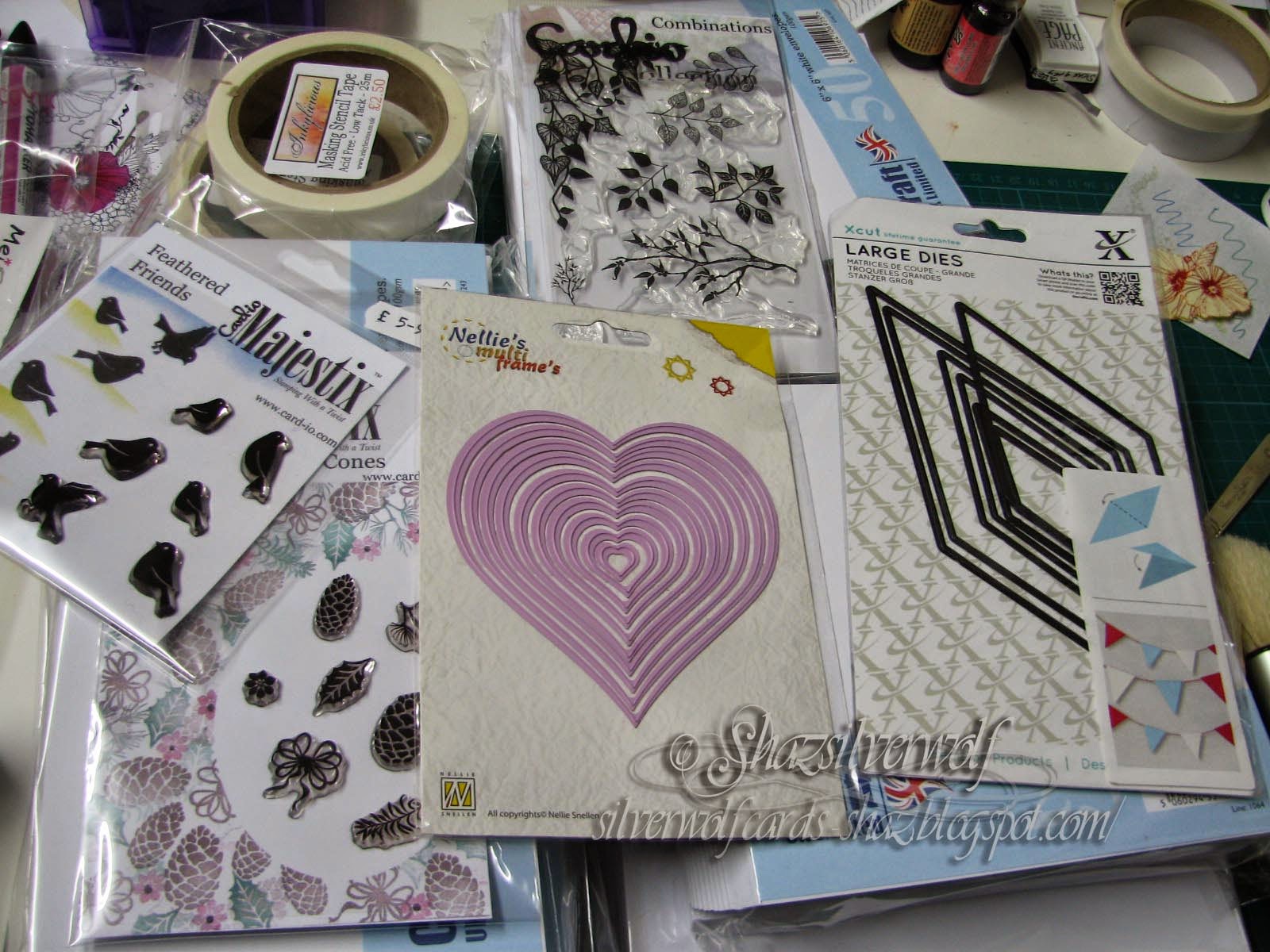 Some Majestix stamps and some low tack masking tape. A set of heart dies, and one purchase I was really pleased about. For ages I'd been looking for a Diamond shape die set, and couldn't find one anywhere. Just happened to spot a single set hanging up on someones stand, so grabbed it. Two random u/m tree stamps- I think the bottom one has a real 'spooky tree' look to it, and only £1 each.Some nice spotty ribbon, 3 new duster brushes and 3 new Stickles.Also some square card blanks- 5x5, 6x6 and 7x7.
I usually fold my own card bases, but square leaves a lot of offcuts, and I end up with too many scrap pieces to try and use up. Which always turn out to be not quite big enough for what I want! 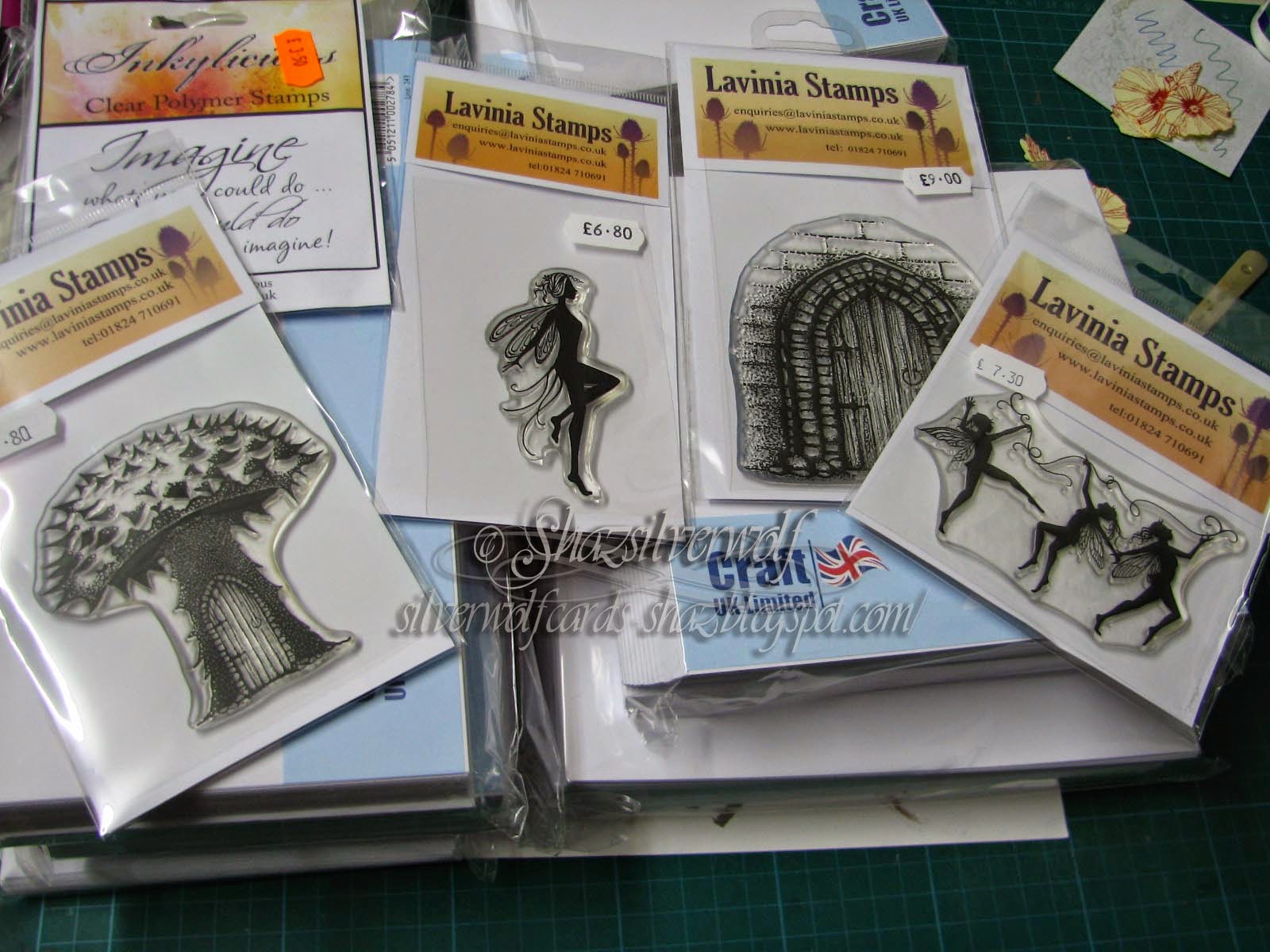 Last purchases now, and I left this one till last, as I know that LLJ will be swooning over them! 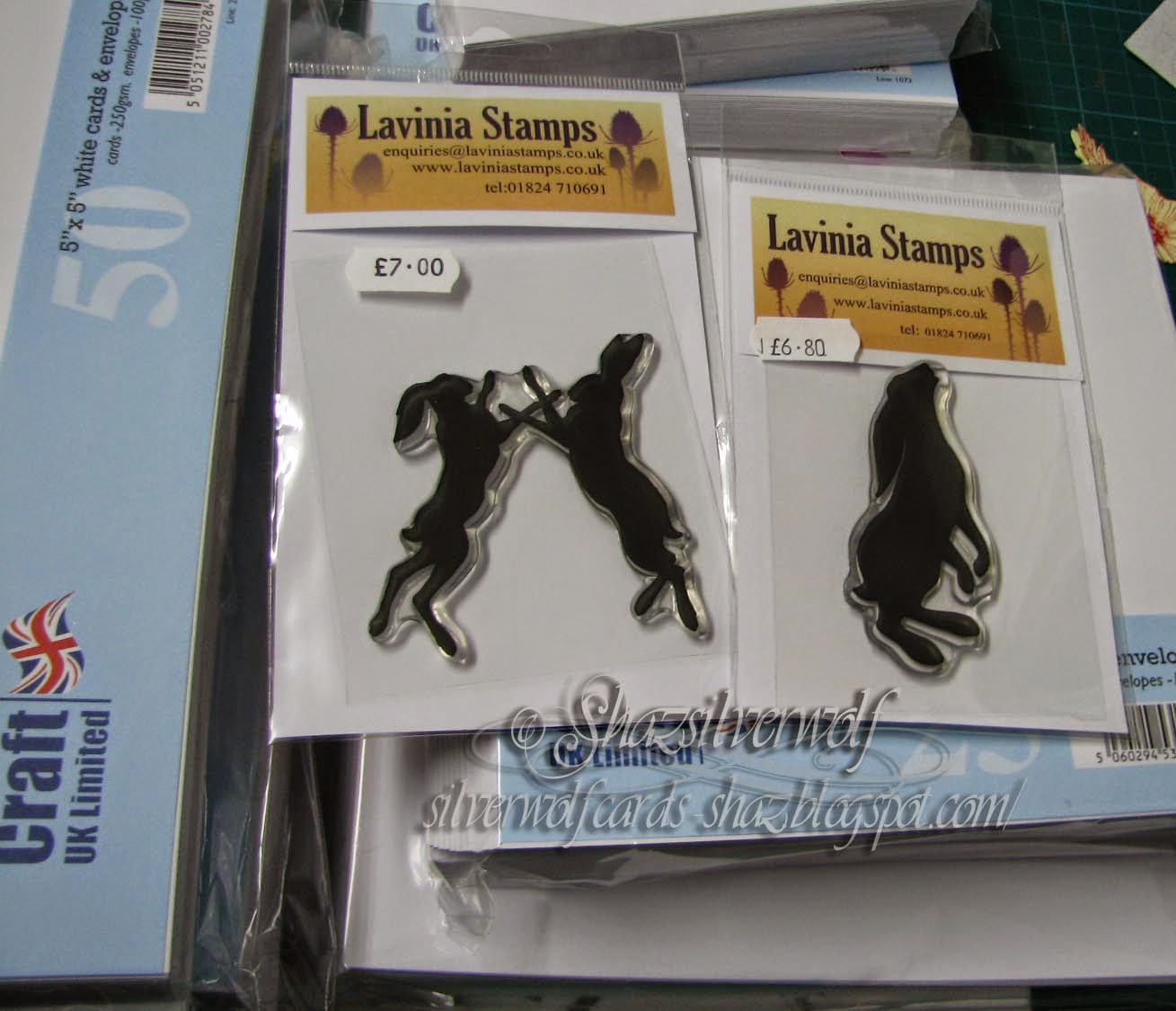 New additions to the range, and launched at the NEC show- a pair of boxing hares, and a lovely 'looking upwards' hare.


One last picture to leave you with, as you know we lost the awesome writer Sir Terry Pratchett a couple of weeks ago. 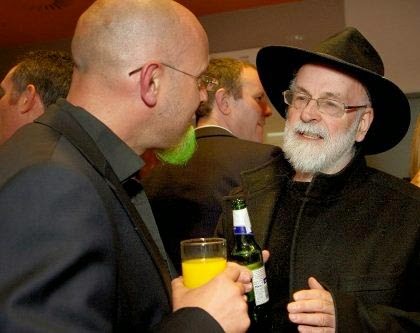 This pic was taken at a BBC 'do' a couple of years ago, where my eldest, Ant, got to talk to the great man. Apparently, he looked across the room, spotted Ant, and made a beeline for him, due to the green beard! Ant said afterwards, that Sir Terry was one of the nicest people he had ever met, a very genuine and extremely interesting person. They had a chat about a sword Sir Terry had forged for himself from iron ore, and about childhood games in general.
So, I'm done. Had a stinking cold this last week, which was not good! Just got me in the 7-14 day danger period, typically. Breathing got difficult enough I had to go to the Docs on Friday, and he's given me antibiotics to clear any infection, ahead of my 3rd IV chemo on Friday. Have to go for a blood test on Thursday, and if that's ok, then I get the treatment. So hopefully the antibiotics will have done their job, or I'll get put back for a week or so, I expect.

Annnnnd we're back at our desks, sharing all our secrets, of the crafting kind, as usual. All thanks to our wonderful hostess, Julia, over at The Stamping Ground.
There is actually some crafting going on, on my desk this week. 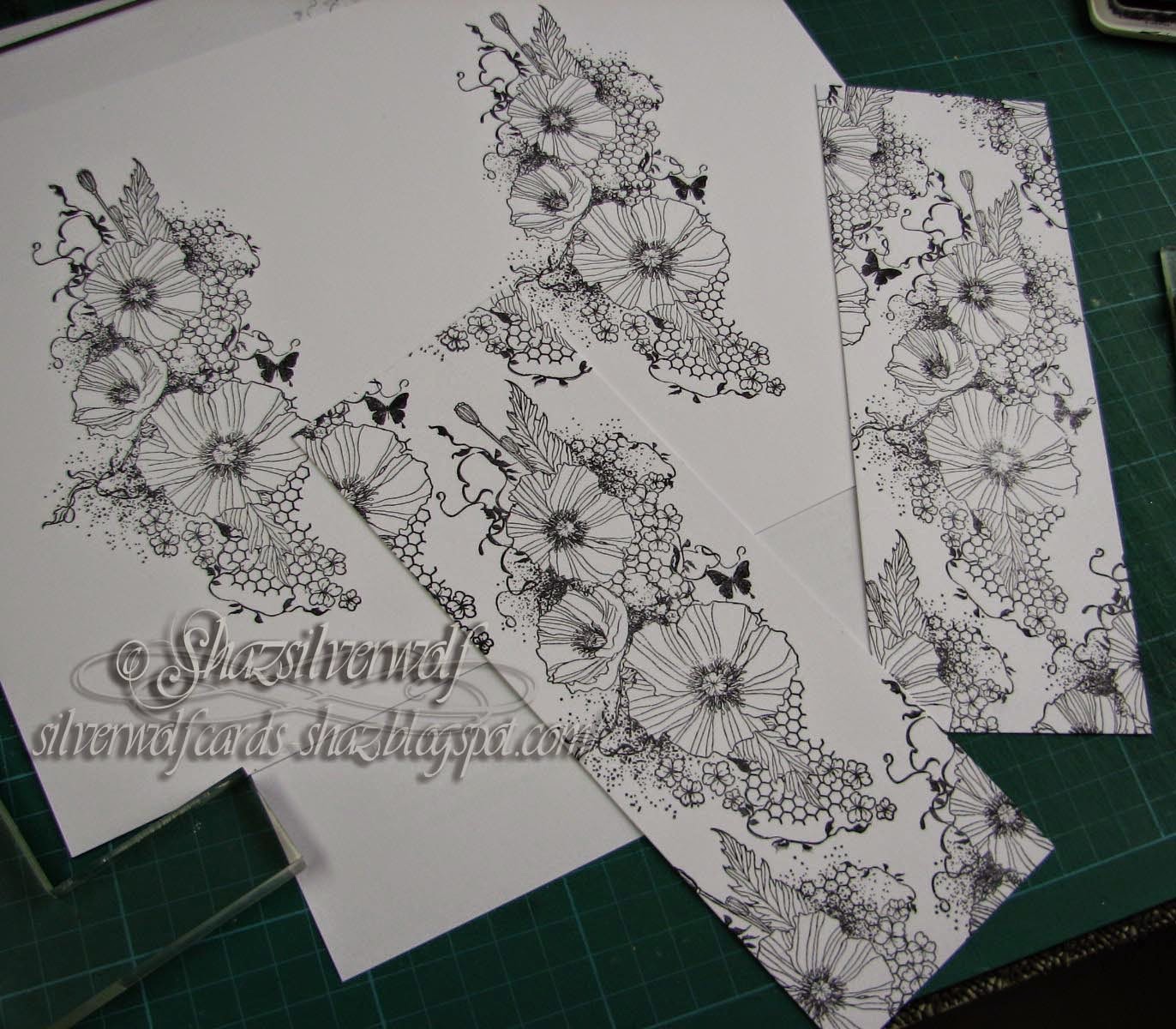 This is a stamp I got last week, from Indigo Blu, called Blazing Poppies. Although you could do them in any colour you wish, just as well, as my first set is blue, lol.
Two sets, as its Mothers Day ( Mothering Sunday) this weekend, and I need the card making fairies to help me get a bit of a move on here. One down, one to go. 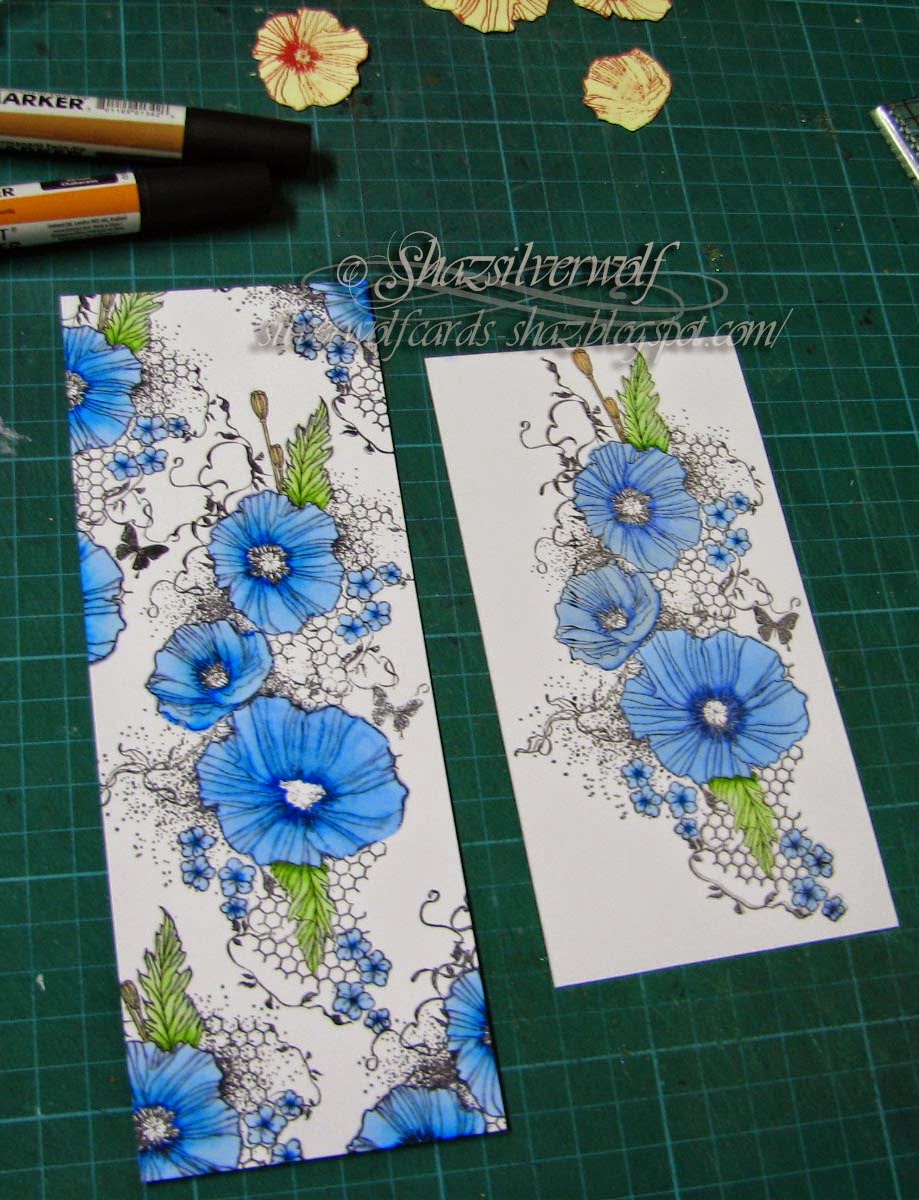 First one for my Mom, who does like Blue, the second, for Dougs Mom will probably be in red.
The other pic on my desk, you will already have seen if you visited Cardarian ( Dolores) last week. 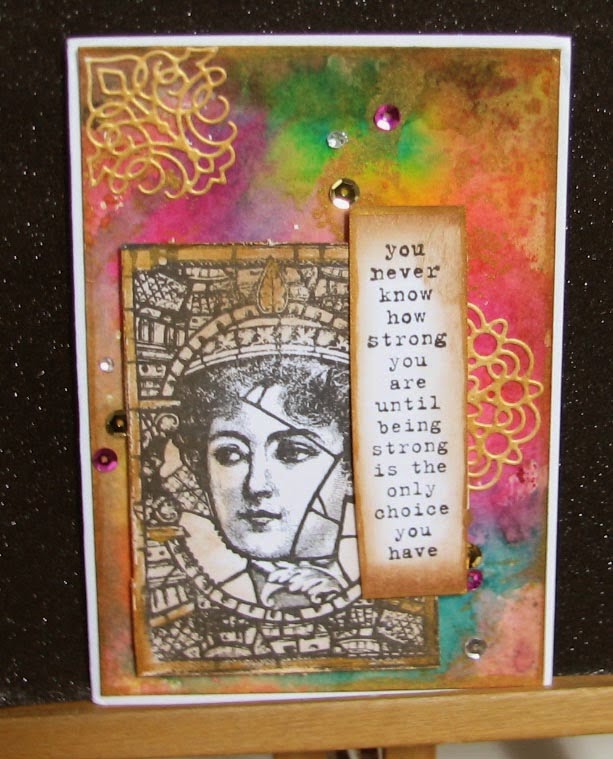 This absolutely gorgeous card turned up in the Happy Mail on Wednesday, a little before I actually saw it on her blog! The colours are amazingly vibrant, it really is beautiful. Thank you, Dolores, you really made me smile.
So, a short and sweet desk this week, for a change. 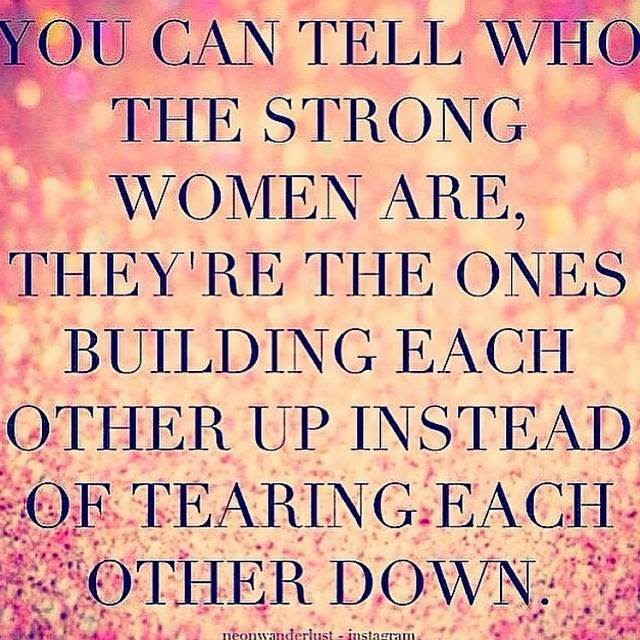 Only one other thing I wanted to share, and I saw this on Facebook last week, on International Womens Day, and thought just how perfectly it sums up every single one of the WOYWW crowd. So, from me personally, thank you, to each and every one of my super-strong friends, for all your support, love and friendship!

Well, here we are folks, 300 weeks into the greatest Blog Hop on Earth, courtesy of the Greatest Blog Hostess Ever, Julia, over at The Stamping Ground. 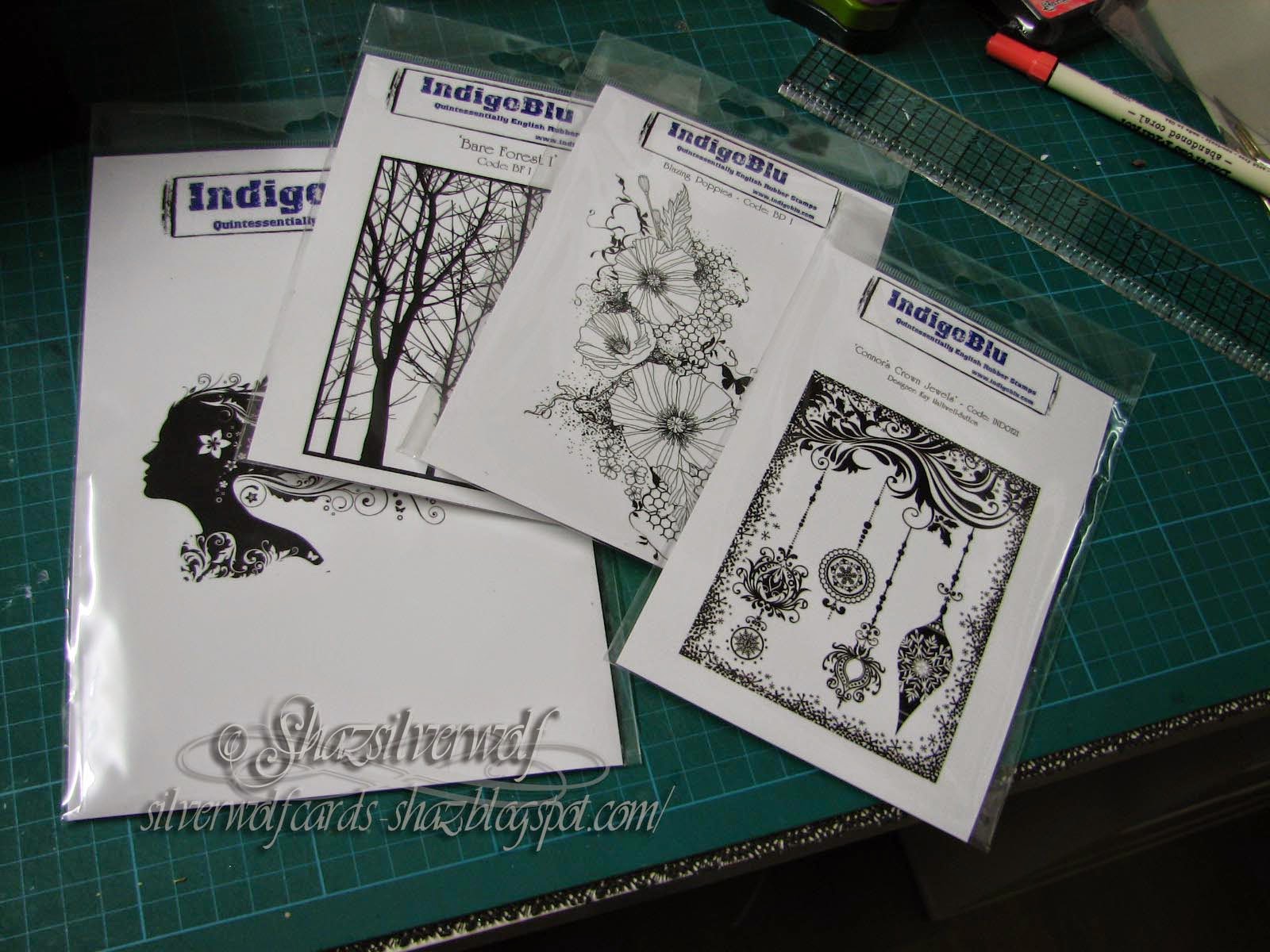 On my desk this week, a bit of Internet retail therapy. A few stamps from Indigo Blu- including a Christmas stamp, so that counts as an early start for me, lol.
You can also see the DI marker for the latest colour, Abandoned Coral. I've just had the inkpad, marker and refill in the new colours. Glad I'm not collecting the paints/sprays/stains as well! 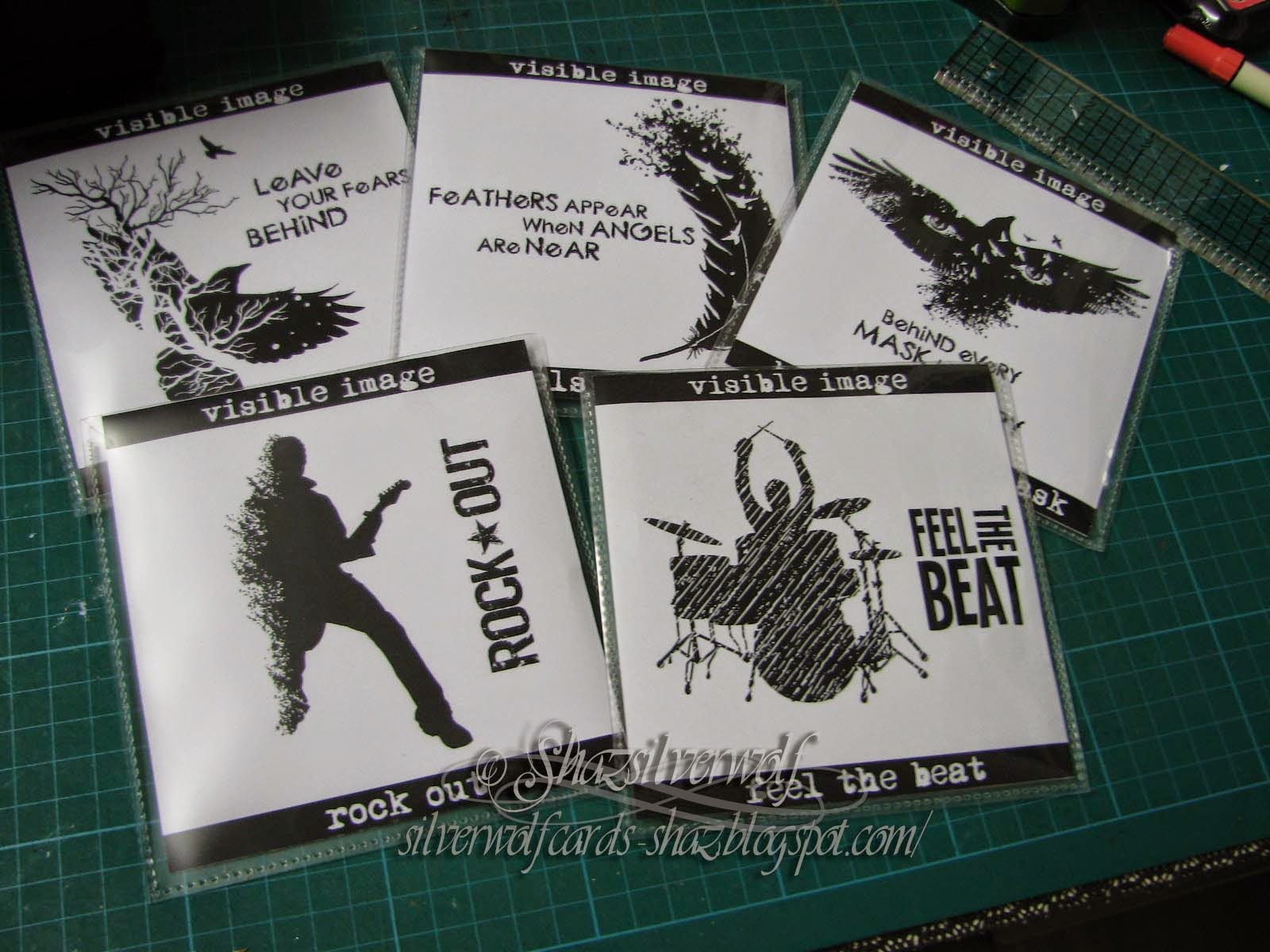 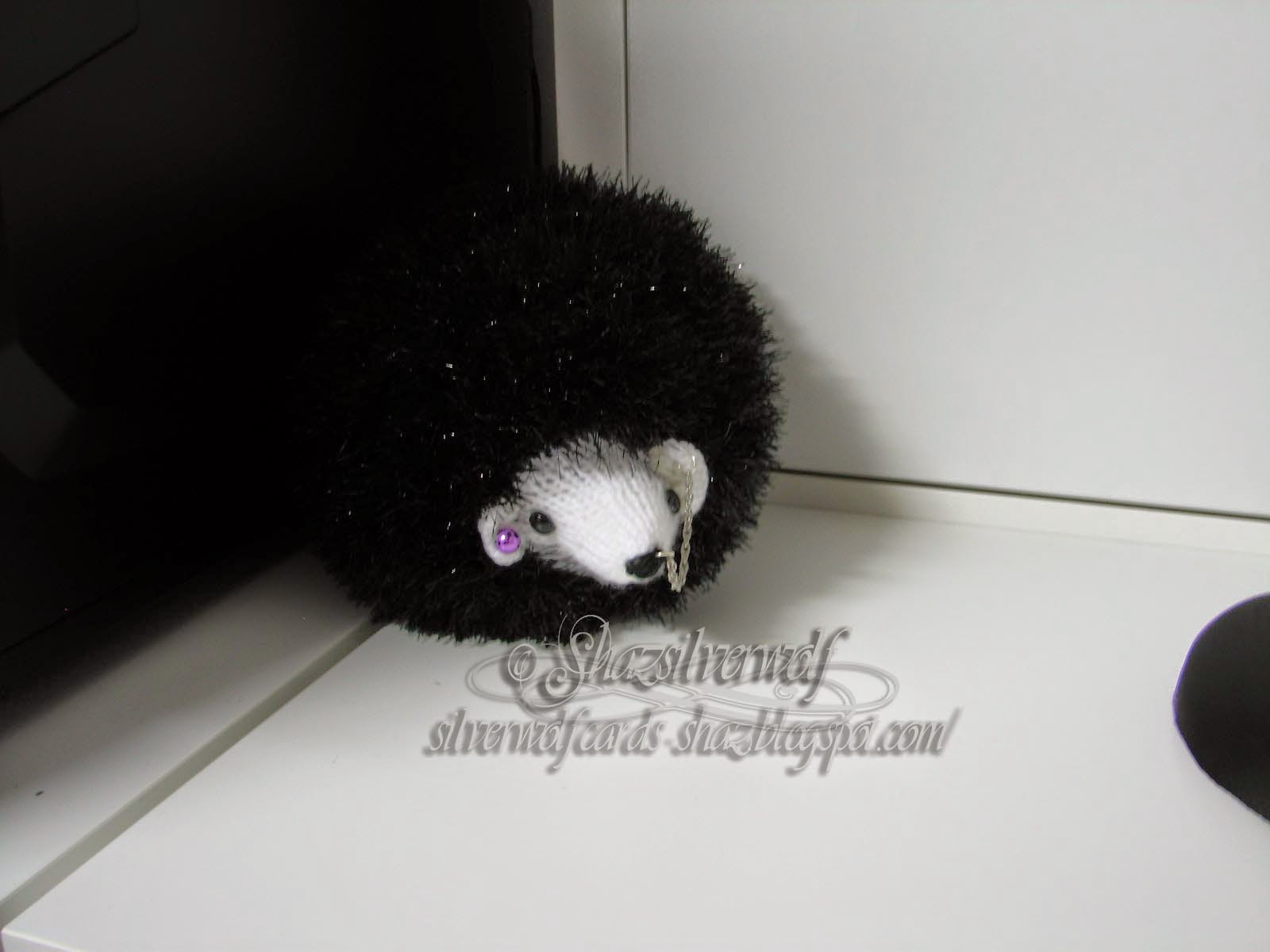 Last item is on my PC desk, rather than my workdesk. He arrived last week, and I was completely at a loss when I answered the door to the postman. I knew I'd bought stuff online, but didn't recall ordering anything squishy,lol. Then I saw the return address, and realised I had a pressie from our lovely LLJ.
He's a punk hedgehog, and he's awesome. I shall name him Spike, and he'll be sitting here beside me when I'm blogging or wasting my life away on Pinterest etc. He has a perfect little corner there to keep him safe and warm, and I can turn him round to see the screen if I think he might be interested. He has such a sweet little face,and two extremely cute little feet- I love him to bits. Jan, thank you so much.
Had a couple of hours out Tuesday morning, my eldest son Ant has himself a week off work, and phoned and asked if I fancied going over to Webbs and Hobbycrafts with him and Beck. Which I did, only came out with a few things, but it was nice to spend some time with him, and I know he likes to actually get to see that I am as OK as I tell him on the phone!
Had a check-up with my Doc on Monday, to make sure that I'd been OK with the first cycle of the chemo, and to have some blood tests done. As long as they come back OK, then Friday will be the second of my IV chemos.
I haven't heard anything off Shoshi or her Hubby, so I don't know if she has had her surgery yet, but she did post in my comments that she has a friend who will be co-authoring her blog whilst she's in hospital, so I expect all the news and updates will appear there soon.
By shazsilverwolf - March 04, 2015 38 comments: