Another week flashes past us, and so we meet up again at Julias place, The Stamping Ground, for another WOYWW. Not got a lot done since last week, seem to be struggling with my energy levels at the moment. 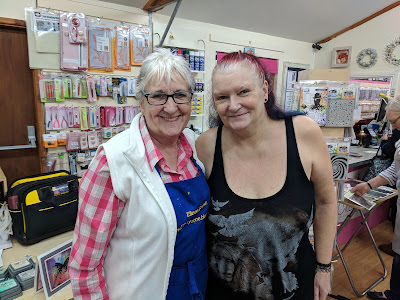 I did get to go to the Eileen Godwin workshop at our local craft shop on Saturday, and a great time was had by all.I'd booked it as soon as I got the email about it, quite a few months ago, as Eileen is a lady I've wanted to met for some years. When I first started blogging, around 10 years ago now(!), Eileen was one of the first, if not the first, person to leave me a comment, and has always been very encouraging to me.
She's as lovely and friendly as she looks, and made the workshop great fun. 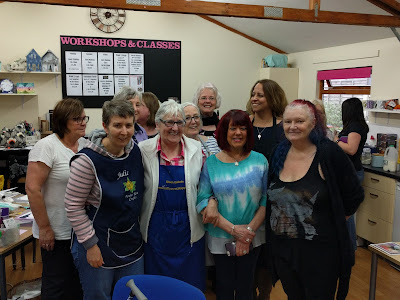 Group photo here, a bunch of smashing crafters, and got to meet a couple who had been Facebook friends for a while, so it's great to meet in the flesh. 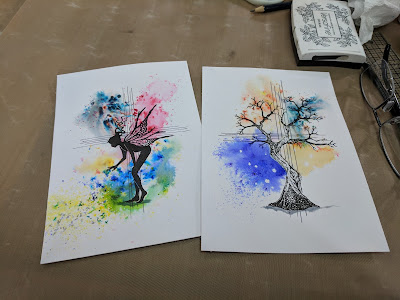 These are the days projects- the first one using Brushos in a very controlled way, which surprisingly, can be done. I think the fairy one needs something else stamping, as she looks to me as if she's reaching out to something. Maybe an animal she's going to stroke, or some flowers to pick? Not sure yet. 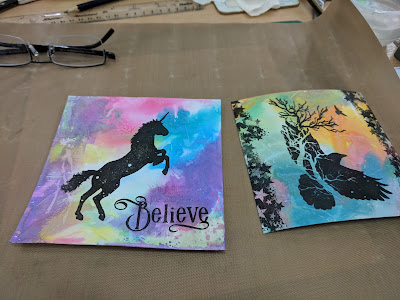 The second pair used Distress Oxides onto a craft mat then spritzed with water, and watercolour cardstock dragged through.

Both my projects still have to be made into finished cards, with some matting and layering, but I deliberately left that bit till I got home,as I have so much cardstock, it will be great to use some up!


So thats me done for this week, short and sweet. I've had an appointment arrive today to see my original surgeon at the QE on Thursday, so we should get some idea of whether they want to look at this skin flap, or if they think it's healing up fine.

WOYWW #437- The Escaped from Hospital Edition. 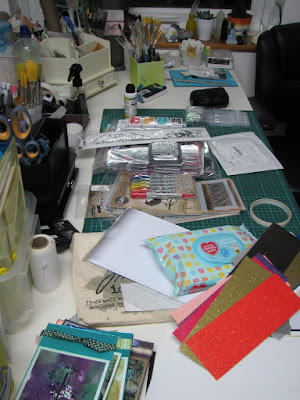 Yes, I'm finally free, and hopefully will stay that way. I'm so sad at missing the crop, and all the people I'd have met for the first time, but fingers crossed another chance will come along soon. I'd gone to the GP on the Friday evening, but he couldn't find anything wrong, but I spent Saturday lay asleep most of the time on the sofa, and Sunday, apart from getting up for a shower, I spent in bed. I knew something was wrong, but not what, so I kept my appointment on Monday to see my Oncologist at the local hospital. Who took one look at me, standing there with sweat literally running from me, and told me he wanted to admit me. Which became even more important when he got a nurse to take my blood pressure and it was 88 over 63! Considering they've been treating me for High Blood Pressure for two years- regularly 200+ over 120+- was a bit of a shocker. Straight away got me a wheelchair, told me to sit, and stay sat, as he didn't want me hitting the floor face first! 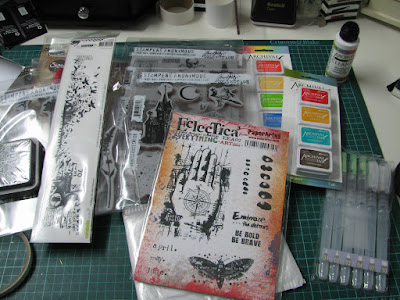 Turns out I had a UTI/Sepsis incident, and have had two weeks of IV antibiotics, which have gone a considerable way to helping. I still have some infection in the flap of skin that was created after my bowel surgery, but they are trying to get me seen by someone at the QE for that, as the level of surgical expertise involved is way above theirs at the local hospital.
One really odd thing, as I said, they'd been treating me for High Blood Pressure for two years. They took me off my BP meds 10 days ago, to get my blood pressure to come up, and it's now sitting at what is a perfectly normal reading, and has been for the last week. Go figure!

So, the photos of my desk are as they got left two weeks ago,all my purchases at Art From The Heart waiting to get put away, which I will do over the next few days. I'm not showing photos of the rest of the room, as I have stuff to put away I'd packed to bring to the crop, and it looks a complete mess right now.
I also spent time thinking about crafts while I was stuck in my hospital bed, and one thing I did manage to come up with was a couple of plans for Art Journaling. I've wanted to dip my toes in this for a while, but was at a bit of a loss for how to start- ideas, themes and so on. I decided that I can do one that concentrates on different techniques, for starters.
For a second one, the idea came in a bit of a convoluted way. Someone on the ward had a radio playing one morning, and one track- an old 80's one- that got played was Ian Dury & The Blockheads Reasons To Be Cheerful, (Part 3). Which I took as a brilliant idea for an Art Journal- Reasons to be Cheerful! So, having a notebook, I started jotting down ideas, setting out pages alphabetically with Reasons.  So still an idea in the bud, so to speak, but coming along nicely.
Huge thank you's to everyone who sent me good wishes on Facebook, I did read them all.
Looking forward to this Saturday, when I'm off to Amelias Creative Crafts, to do a workshop with Eileen Godwin. She's on the DT's for Lavinia Stamps, Sweet Poppy stencils,Designs by Ryn, and now Visible Image, and has a very distinct style and use of colour I love. Plus, back in 2010 when I first started blogging, Eileen was one of my first, if not the first, followers, and encouraged me greatly, so I've wanted to meet her for a long time now. So I'm really psyched up for that, there will be photos next week!
By shazsilverwolf - October 18, 2017 33 comments: