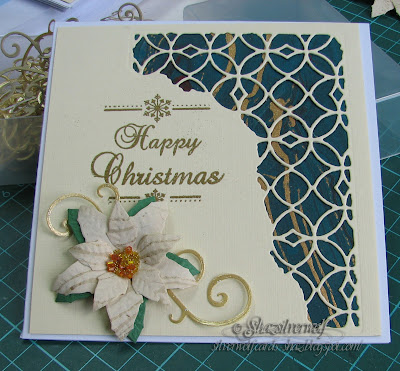 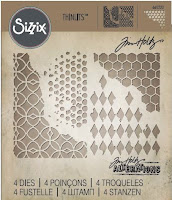 This is the first of the batch of seven cards I made, thanks to some Pinterest inspiration.


Here is the card that caught my eye, and the creators blog, Mrs.B's Crafting Addiction, is here. 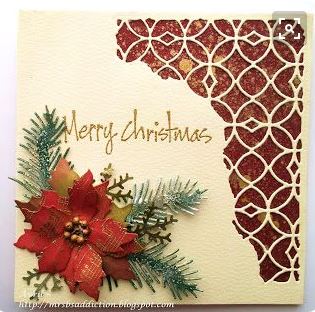 The Mixed Media dies I used are from this set, which I think is Number 1. I used the  distressed harlequin die, and the sort of baroque looking one, far left. I'm assuming this is set No. 1, as it's the only one which doesn't seem to have a number, or the dies to have names!
What really grabbed me was Avrils use of the backing paper to the die. I know from her blog she sprayed the red paper to create hers, but it reminded me of some handmade paper I have in a file, bought ages ago at the NEC. They were in A1 sheets, so I'd cut them down to a more manageable A4.

There is also a sheet or Orange/gold, but I didn't think that would work for this project.
I  cut some cardstock with the Mixed Media Thinlits, using a mix of white and cream cardstock.
I next cut some of the handmade paper to back them with. 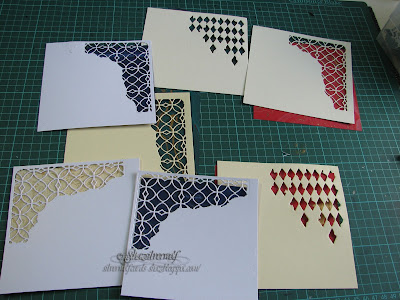 I had a total of 7 card bases now. I had a couple that had been left marked slightly by the masking tape I used to hold the dies straight, but I already had a plan to hide that.
So here are the bases with their respective backing papers. 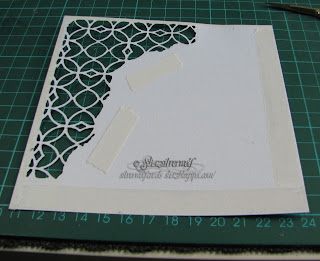 I attached the backing paper with DST, and I found adding a couple of bits close to the edge of the cutout helped it to lay flat. 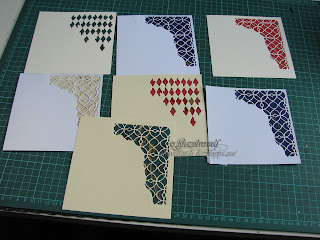 All mounted, and now for the sentiment. I admit at this point I realised I should really have done this step before attaching the backing paper, especially as I'd used DST, which can easily separate when heat is applied, and I intended to heat emboss the sentiment. 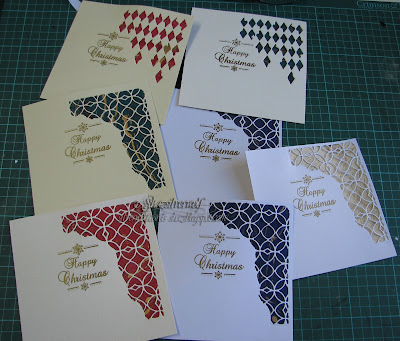 The sentiment comes from one of the Phill Martin sets, Snowflake Sentiments. I stamped it in Encore Metallic Gold Pigment ink, and covered with Gold Detail EP. They did warp a little, so I stacked them up, and put underneath an acrylic block with some weight on overnight. 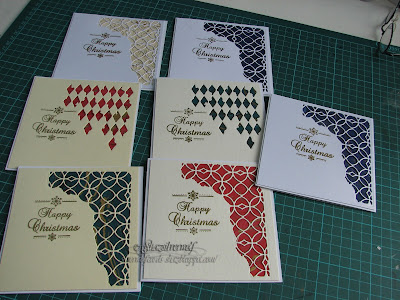 Next day they are nice and flat, and attached on to 6"x6" card blanks.


Now for the Poinsettias.
I have two Poinsettia dies, one from Spellbinders,which has 4 sizes of flower die, and a slightly smaller flowered one from Le Creatif, which  has 3 flower sizes, and also has a couple of small flourishes as part of the set. 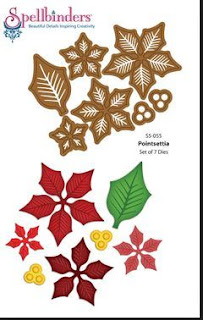 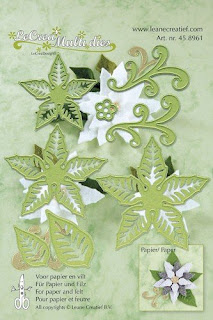 I cut a number of each size of flower from both sets, using some red leather effect paper I have, which gives a great texture to the flowers, as well as some from the cream/gold paper.
I also cut some of the largest flower die in both sets from green card/paper, for leaves, as I prefer using that to the leaf die provided. 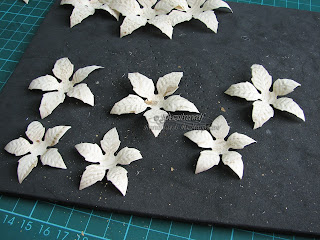 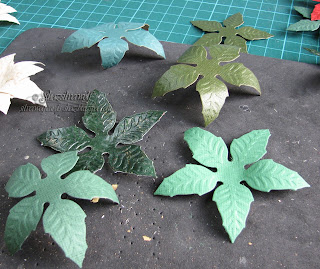 Each flower has its petals rolled over my pokey tool, then the centre embossed on a mat using a large ball embossing tool, to give the flowers shape. 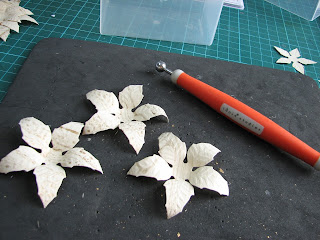 They are then layered up, making sure to offset each layer a little to build up the flowers. 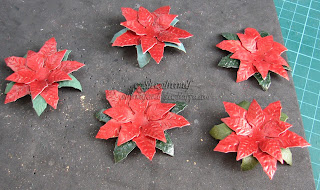 You can build the flower as large or as small as you like, depending how many layers you add. 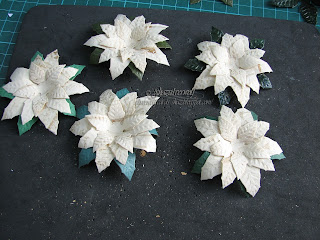 Here are red and white/cream poinsettias, along with their leaves, stacked up using silicone glue.


Next the flowers need centres, and the die sets do provide an option, but I don't like it. 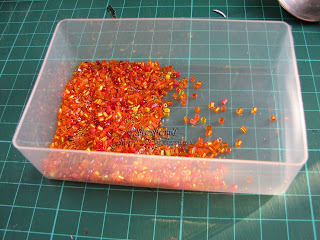 I poured some orange/yellow/gold seed beads into a small tub, along with some similarly coloured nail art caviar beads, and gave it a mix.

Each flower centre got a blob of Glossy Accents, and then a spoonful of beads. 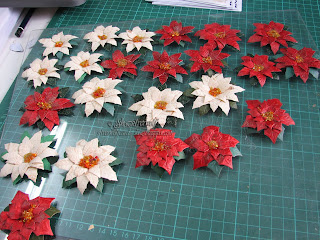 All lay out on a spare Big Shot Pro plate to dry overnight.
While they were drying out I die cut some assorted small flourishes, and also the Tim Holtz strip die,Winter Foliage, but I ended up not using that this time around. 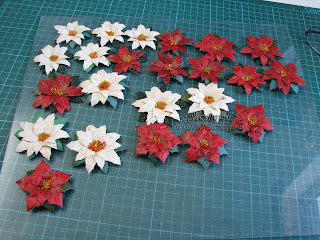 Next morning they are all set, time to add to the cards. 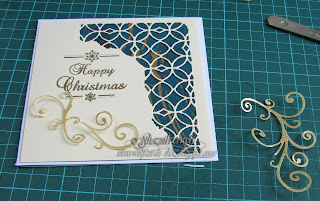 The flourish I wanted to use was not quite curved enough for where I wanted it to sit, so I cut it in half, as the join would be hidden under the flower. 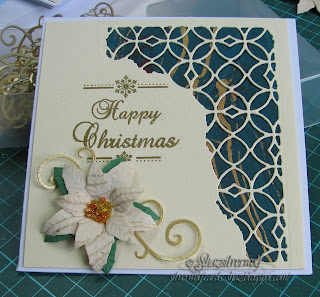 First of the batch done, and put aside to dry. 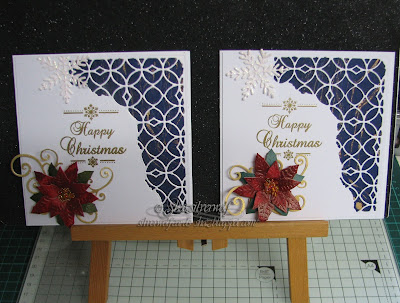 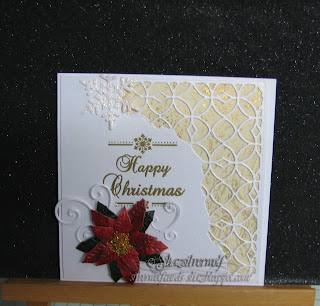 One using cream/gold paper, with a Red Poinsettia, on a white card base.

You can see a die cut snowflake on 3 of the cards- that was hiding the slightly damaged card from the die cutting! 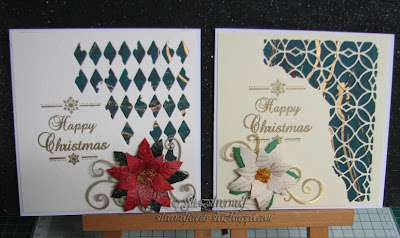 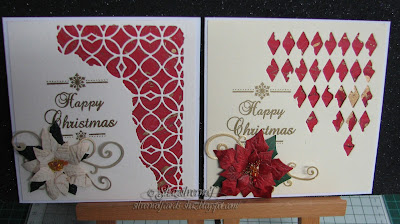 Final pair, using red/gold backing paper.
This would be simple enough to recreate either by spraying or stamping a plain paper with gold/silver , and also using some of it to die cut your flowers from.
Huge thanks to Avril, for such an inspiring card, that's added another 7 cards to my Christmas stash.
By shazsilverwolf - September 18, 2016

Absolutely love your cards! I have that TH die but haven't used it yet so thank you for the wonderful idea!
Hugs Cardarian

Hi Shaz, Thanks for your visit and nice comments. I'm so pleased you liked the card and that it gave you inspiration. Your cards are gorgeous, and I do like the blue and white ones with the red poinsettia. Lovely post and thanks for the mention.
Hugs, Avril x

ooh not bought any TH items for a couple of years (got a little tired of the constant product placement and started getting a bit too cutesy and really expensive-though quality is always great) but I looked at these at a show earlier this year....I do like what you have done with them and I can see many uses so you may have just tipped me over the edge!! I have two shows later this year-I may have to purchase this one!!!
kyla
ps - not the first time you have been my 'enabler' for purchases-between you and Helen I don't stand a chance!!!! :-)

Wow Shaz, stunning cards. I love all the versions you have come up with. How super that you found the inspiration and were able to develop it.
Toni xx

I'm sitting on my hand not to buy the TH dies, but it makes it hard to type! Wonderful cards. Cara x

Great batch making Shaz. They are all beautiful cards and a good way to cover up with the snowflake. Barbxx

So CASing these! I have these dies. Would never thoguht to use them on Christmas cards! You are super smart LOL Creative Blessings! Kelly aka Rain

Can you purchase any of these cards