We had a doctor go round this evening and one of them was present during the operation so we had a chat with her; apparently they did go in with the intention of keyhole and the frozen slice (sample to lab then proceed) but she said once they opened her up they could tell it was in deeper than the scans showed and it would not have been worth doing it that way. So they opened her up (shan't go into detail like she told us due to some people may be squeamish) and proceeded to to take the nodule out by taking the upper left quadrant of the lung out all together and be done with it.

As she is drinking ok now they was talking of taking her off IV fluids, whats going in is coming back our clear too . H er drain in her side was changed to an rocket (old school one) as apposed to the modern flakey digital one that they are seeming to be having issues with.
She is still in HDU at the moment but i expect that may change tomorrow or saturday at the latest.

I am back home now as shaz was going tired, she has a fully charged phone, blurred vision and poor hand /eye coordination so expect some bizarre texts and post's until she drops off.

No eta on when she will be out but going by the difference from yesterday to this evening i reckon maybe the weekend is not that close after all.
Incidentally the biopsy results should be with us in 2-3 weeks time, shaz is convinced it was nothing to worry about and she has now lost a quarter of a lung for nothing.

good night Doug and love to Shaz tomorrow...looking forward to the bizarre messages!

Fingers crossed it turns out to be nothing ! Keep us updated

Goodnight Doug... thank you for the updates.. sleep well <3 xx

Dear Doug. It has been a long two days for you both. I am praying for you both. Take care of yourself, and trusting you get some decent sleep without too many bizarre texts!!
God bless. You're a star! Love to Shaz when you go in tomorrow.
Margaret

Thank you for updating us, Star Dates and all! Please tell Shaz that we are all thinking about her on WOYWW and hope that she heals quickly so you can take her home and spoil her. Lindart

Weird texts and FB comments are nothing new from Shaz! Glad she's doing ok, hope you are too xxxx

I do hope Shaz is improving! Sounds like she might be doing ok. She is always missed by her Woyww friends.
Take care of yourself too.

Thanks for the update Doug. I hope that Shaz gets a good night's sleep and continues to improve tomorrow.

Ditto on all the thanks fir the updates over there Doug.
You hopefully will be resting as well as Shaz ready for the new day as we get ready for the end of it here.

I am praying for dear Shaz and for Shosh,i for all to be going well.. esp that the biopsy will be clear. (Shoshi said on her WOYWW 400 post she was having emergency surgery on Thurs morning for a blockage). Cancer can be a real pain in every way.

Sending hugs and prayers to Shaz for swift healing. Shaz in Oz.x

Don't worry too much cos we all send weird texts....it's our age lol. So glad the news sounds good. Rest and recovery....for you both now.
Hugs,
Annie x

How typical of Shaz to think of that! made me LOL. I'm just glad that this operation hasn't had the delayed recovery and awful pain of the last one. Prayers of a sort are being offered for this, fingers are crossed and on that basis, I'm expecting Shaz to keep doing well. *said in my stern voice so that when she reads this, she can picture half of my face doing a big frown*!!!xxxxxxxxxxx

It would be really bad form if I was late with this fortnights challenge, as it's chosen by me, and I've asked for Christmas Trees, ... 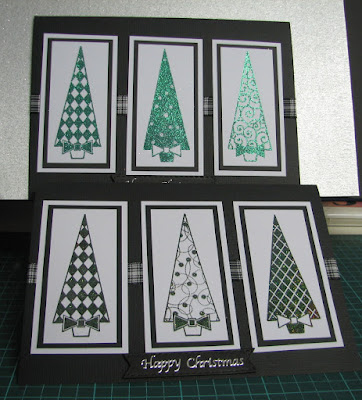