Hi folks, back from 2 weeks in the sun, on Corfu, mozzie capital of the world! Thats a panoramic pic taken by Beloved Hubby on his new tablet gadget thingy. 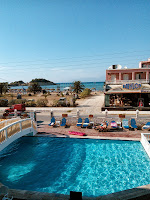 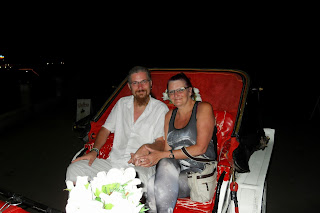 This was the view from our balcony, the beach & sea just over the road. Me and Beloved Hubby having a pony & carriage ride around Sidari, where we stayed.
So not a lot of crafting done, as yet. I did have to throw together rather fast yesterday afternoon, a card for a girl at work leaving to have a baby. She was going to go next week, but decided to go this Friday instead, so it was a bit of a rush job, but didn't come out too badly, I have to say. 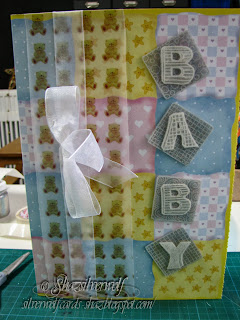 Biggest help was all the glittering I did a while ago- the squares & Baby word are Chocolate Baroque stamps, in White Staz-on on transparency film, silver glitter on the back of the squares, and white on the letters. The background paper I have had for ages, and I went with white for the glitter & ribbon, because when I started it, I realised I could not remember if she's having a boy or girl. I thought she was having a boy, but didn't want to take the risk that I had the wrong idea in my head- wouldn't be the first time- so played safe with a paper that covers all options, :) .So thats me for this week, I'll hopefully post early, and be back later to visit. I'm back on double day shift for a few weeks,which is a whole other story, but if I start telling it, a lot of bad language will be involved, and I wouldn't want to shock my visitors.Have a great Wednesday!