WOYWW #542- The Fighting Back Edition.

Yep, because I am. Slowly. The last chemo totally wiped me out, and I'm definitely still not even close to ok again, but for the first time in over a week I'm back in my craft room, and linking up at Julias Place, The Stamping Ground.
No crafting done, apart from some colouring I've sat doing, but there has been some internet shopping done, so normal Enabling Service is resumed.😇 I mentioned new Lavinia stamps a couple of weeks ago, and here they are.
Pegasus- or is it Pegasi?-  and mushrooms.


I also paid a visit to Country View Crafts, and as well as a TH Christmas cardstock pack, which I don't actually NEED, but they were too gorgeous to resist, I also got a couple of bargains in her end of summer sale, so worth a look. 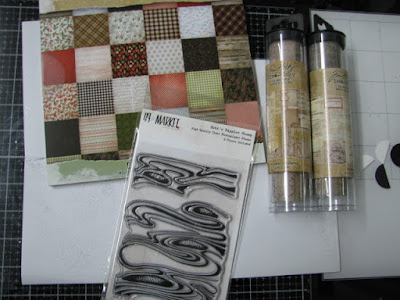 Some TH Tissue papers, and a fab waves stamp. 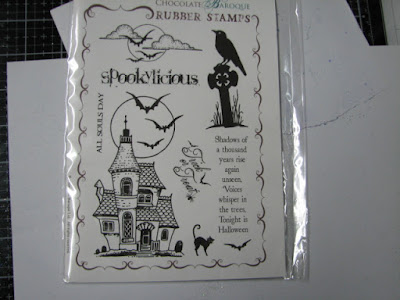 This older Chocolate Baroque set, because the words were used on ATC's from a Halloween swap I was in, and loved them. Is it wrong that I read them in the voice of the great Vincent Price, lol? 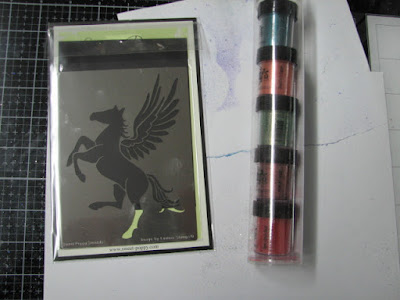 A Pegasus stencil from Sweet Poppy, many of their stencils have been designed by Tracey from Lavinia Stamps, and match up with stamps.

The Embossing Powders are by Lindys Stamp Gang, part of the range of Two Toned Embossing Powders they make. They used to be called MoonGlow Two toned when I first bought them many years ago,  the Lindys brand seems to make them now, but they are not very widely available in the UK, so these on E-Bay were a lucky find. 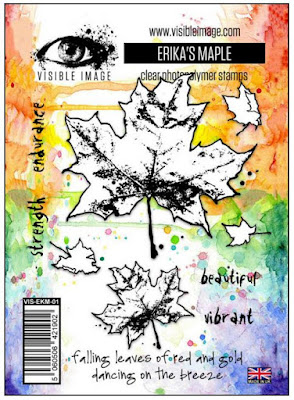 I don't have this one yet, they are pre-order for 31st October, but you all know we lost a lovely friend in Erika earlier this year. Erika was a huge Visible Image supporter, and Mark & Helen were at her funeral. Mark has designed this stamp set in her memory, and Helen has added words that reflect Erika.


This was the anniversary card I actually managed to get done in time a couple of weeks ago. I'll try and find the energy to blog it later in the week, with the products used. 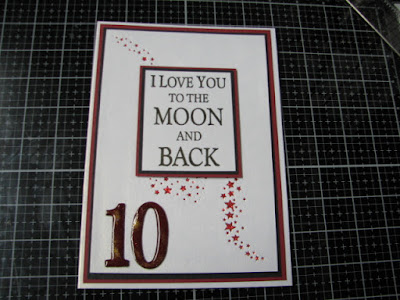 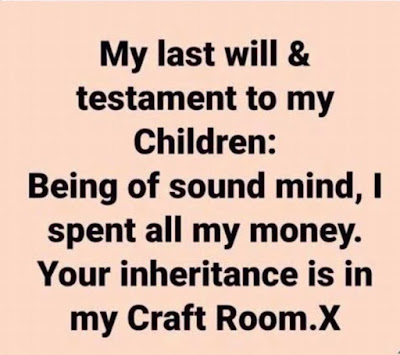 This weeks chemo is put off, I'm needing another 3 or 4 weeks recovery time. This one really flattened me, I spent 18 hours or more asleep last Wednesday & Thursday! Still not even close to having any strength, but at least the worst of the brain fog has gone, and best of all the neuropathy in my mouth has gone so I can have cold drinks. Nothing worse than desperately wanting a cold drink but not being able to have one for at least a week. 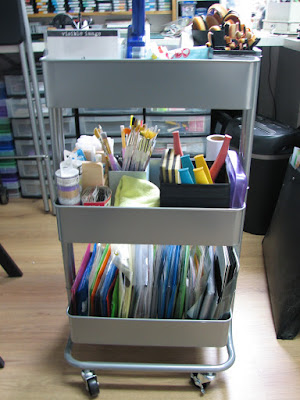 Back again then, as usual our regular wander round the desks of the world, seeing what everyone has been up to. Leaving our blog link along at Julias place, The Stamping Ground- feel free to come join us, we're very friendly! As always from me, there *may* be some enabling. 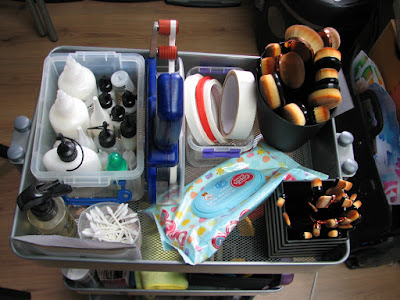 And here we go with the first. I have seen so many people with the IKEA Raskog carts, but they're a bit pricey I thought, although they have just dropped the price by a tenner, ( to £40) I also had a look at the Hobbycrafts one, which was a very sensible £25, and as they had a promo running of 20% off online orders, means I got it for £20. And I was very pleasantly surprised when I unpacked it. You have to put it together, but that literally took me all of 5 minutes. It is a very good size, neither ridiculously large, nor uselessly small. Trays measure 15½ " x 11½"(40x29cm), and stands 31" (77cm) tall.  Also, very sturdy. Comes in a few colours, I went with the grey. I think the others are mint, rose gold, and white. It has two lockable wheels. Love how much stuff I've now been able to remove from my desk, but still keep handy. The baskets are really strong and deep, and there is plenty of access room between them. I've been able to remove my two boxes of UFO's from the desk, and they all fit in the bottom tray.
So, very happy with it.

I'm waiting on some stamps arriving from Lavinia, as they just put out some more new ones. They're not here yet, so I'll share them next week.
I've also bought myself a new toy I'm waiting to arrive, so I'll do an unboxing and some testing when that turns up. 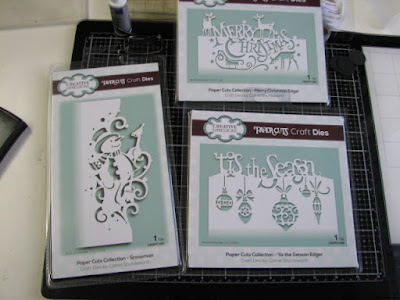 These did arrive, I'm so far behind on Christmas cards this year, and thought these are going to help make a supply pretty quick. I reckon some foil/glitter card behind those baubles will look ace. 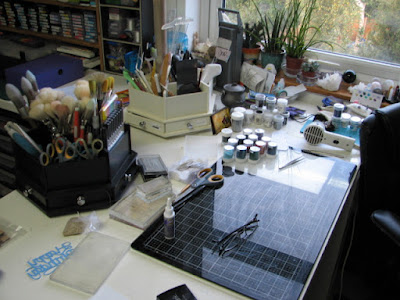 But it's desk shots you want to see, and this actually doesn't look as bad as I thought it did. It would look better if I got my act together and concentrated on one thing at a time.  Like the 10th Wedding Anniversary card I need to get done for Thursday! 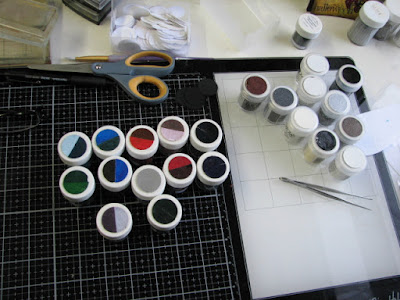 As well as tidying stuff into the cart, I got distracted by something in a video from WOW! embossing powders I watched. She'd made little circular swatches that she'd stuck onto the lids of her pots so she could see what they'd look like embossed. Which is something that I thought was brilliant, as it's not always easy to know what some powders will look like. So I got sidetracked. Some pots have split swatches on, as some, like sparkle EP's, or these 'two-tone' ones, look different on light or dark cardstock, so I punched out a bunch of circles, and then cut some in halves to match up on the lids. 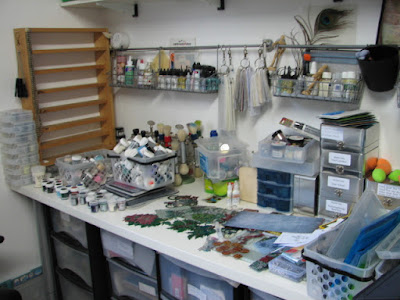 This is the 'craftermath' on the desk behind the desk, the Christmas glittered images I'm gradually matching with background stamped pieces, more embossing powders than any sensible person needs, and generally anything I'm trying to find a new home for.

Received a fab card from our lovely ShazinOz the other day, thanks Shaz, it is so appreciated. 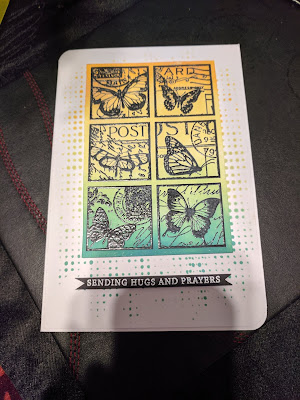 And so I'm almost done. Two more Chemo treatments to go, and I shall be able to stop hiding away from people with germs, like the hermit I've been for the last few weeks. Missed 3 gigs last week, as because of the treatment break I had, they now fell in the week my immune system was at it lowest, so the risk was too much.They were all in small halls where you're really crowded together. However, we are off the the Birmingham Arena on Friday to see Alice Cooper! 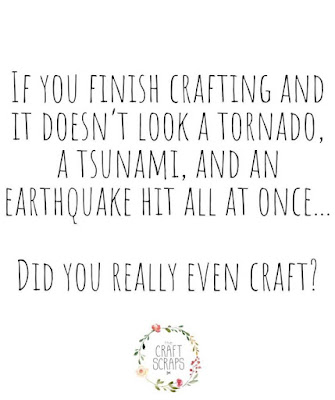 I think this pretty much sums up the state of my craft room this week!
By shazsilverwolf - October 09, 2019 26 comments: