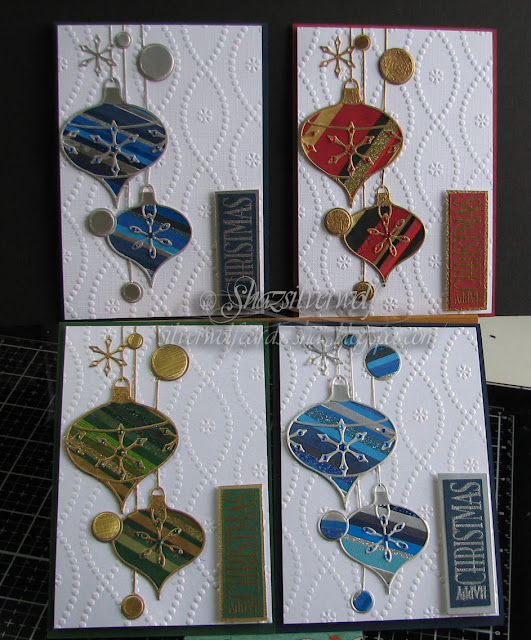 As I've said before, I picked up this technique of using strips trimmed from cardstock offcuts from Jennifer MacGuire.
Earlier this week I spent some time making up some sheets, and whilst doing it I thought of this die, and how the baubles would look with this technique, so I made some using suitable colours for Christmas Baubles.
HERE is the original post I did making cards this way.

The dies used are all by Memory Box, Hanging Ornaments,Traditional Ornament & Classic Ornament.

I've had these some years, so I'm not sure if they're still available. 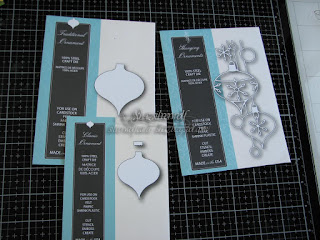 I'll share how I made these, and also the changes I made to make the fourth one for the video,as well as a suggestion or two that I think would have made the process easier.


I began by die cutting the Hanging Ornaments, and as you can see I separated them from the backing. This is the first recommendation- leave them in the backing piece. Although cut from cardstock, the lines of the ornaments are very thin, and it's quite hard to maintain the shape when adding the bauble backing. 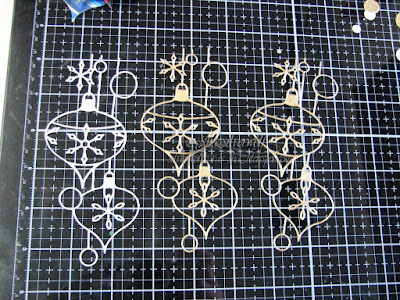 I also found it easier to add a layer of Double sided adhesive sheet to it before die cutting. It's very time consuming adding liquid glue to all the lines.
Also, keep the little circles that come out of the die cut. You may want to use these later. 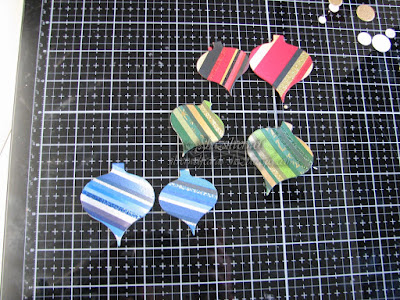 Next I die cut the bauble backgrounds, and for the fourth one I also cut the small circles from the striped base. 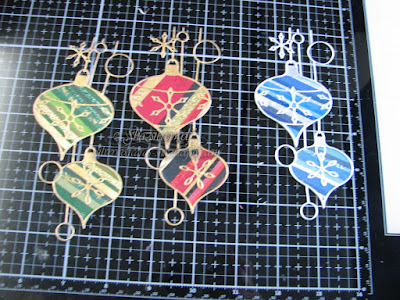 After attaching the baubles, it's best to lay them flat with a couple of acrylic blocks on them if you've used liquid glue.


I skipped a few photos at this stage, but what I'd done was run some white cardstock through an Embossing folder, this one is by Crafts Too, and called Seamless Circle. 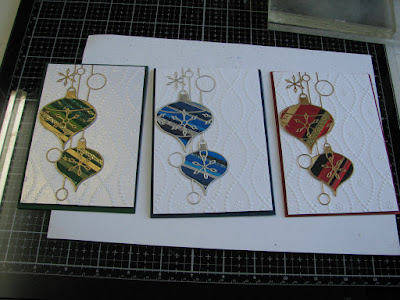 I trimmed it down to leave a slight border from the base card showing. The base cards are roughly 5¾ x 4¼. They were made from an A4 sheet of cardstock, cut lengthways in half, to give a topfold card, or a landscape side fold card. 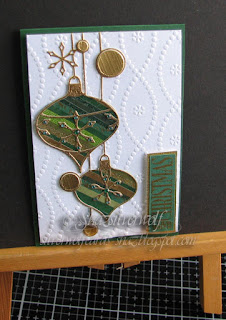 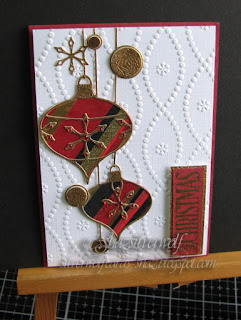 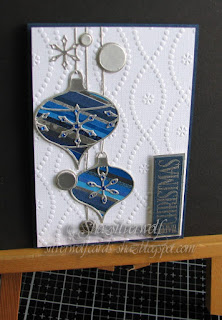 I used some white fun foam on the back for a little dimension, equally you could use foam tape/pads. The Ornaments were added with glue again, then lay under acrylic blocks to set.
You may be able to spot in the pic of the three die cuts that the lower bauble backing sticks out into the circle next to it. In the blue one you can see I trimmed it to shape with small scissors, but if you are going to attach those little circles with foam pads or Pinflair Glue for a bit more dimension, that really won't matter.
The sentiment is from a Hobby Art set called Winter Wishes. On these three I used the gold & silver circles that came out of the die cut, and on the final one I used striped.

So, another tip here for you. If you intend to make some of these striped pieces, and are going to die cut from them, I'd definitely tell you to use either very thin cardstock, or even paper to stick your strips to. Jennifer actually tells you to do it that way, I'd just forgotten! The cardstock strips will give it enough rigidity, but if you do as I did and stick them onto your normal card base/layers cardstock, it makes it very difficult to die cut with the thin dies, as you are trying to cut through 2 layers of cardstock and the adhesive sheet. Took a lot of shimming, and multiple passes to just cut out those bauble background shapes. If your dies were more intricate, or you wanted to cut out words/sentiments I think you'd end up needing to do a lot of fussy cutting/ trimming with a craft knife to free them.

Final touch was to add some acrylic gems to the snowflake design on the baubles. 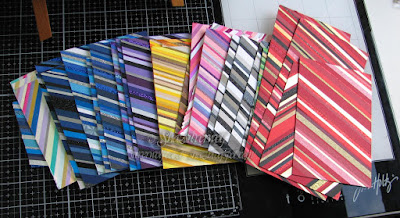 These are the batch of background sheets I made, mainly A5 in size.
If you want to do this, but don't have double sided adhesive sheets, you could just put strips of double sided tape on your base .


I've also done a You Tube video of this, making up the last card.

Love this technique (think its far to intricate for me though!) and really like the embossed background too.

Hi Shaz, this is a great technique and your cards are stunning. The dies are perfect for the finished strip pieces. I also love the embossed background - gorgeous. Hugs, xx

Beautiful cards! Now I want to make some similar ones. Your video was very helpful - thank you for making it.