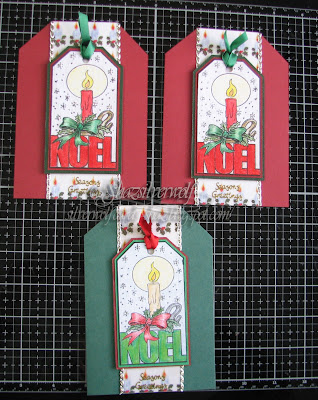 Finally getting to post today!Rita has chosen this theme, and she'd like us to feature Christmas Candles. You now how doing one thing can spark off another idea, and then that one gives you yet another? I started with one idea,using this tag stamp. I have no idea who made it, it's far more years old than I'd like to think! I can only tell you it's a clear stamp. I stamped it, then coloured using Prismacolor pencils. The vellum panels came from some vellum I found in my Christmas papers box, and I also added some tiny acrylic stars to the tag background. I've had those ages too, I ordered them to use as Tree star toppers, but when they arrived they were too tiny for that to work.
I trimmed the cards upper corners to match the tag shape.
It was while looking in my Papers box, I spotted the wallet with my glittered pieces in, and recalled I had some lovely Celtic Knot style candles in there. So that made another half dozen cards. 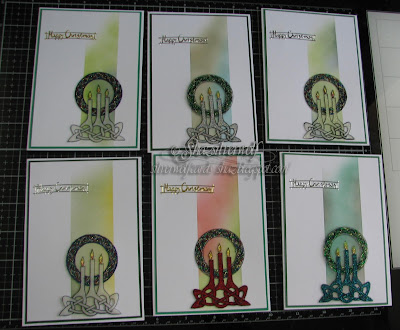 The sponged/brushed strip is an idea I've seen Eileen Godwin use a lot, just masking off the front of the card, and gently applying inks of your choice. I'm not brave enough to work directly on my card base yet, lol, so mine are matted and layered.
The candles are attached with a little Matte Medium, and I've used some peel off sentiments. 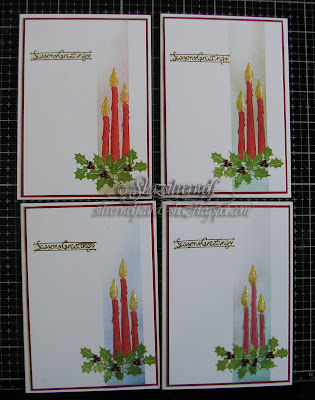 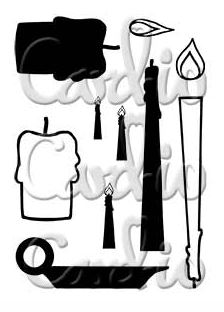 These were the final 4, I have a Card-io stamp set called Christmas by Candlelight, and wanted to use that.

To get the candles standing in Holly took a bit of thought, but finally figured it out. 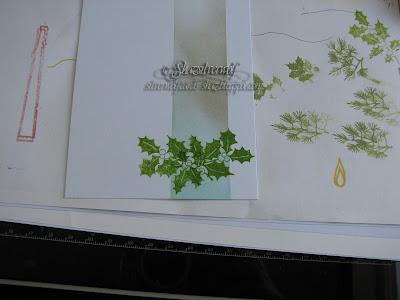 I stamped two Holly Branches, which is a Lavinia stamp, and used Archival Leaf Green for that. 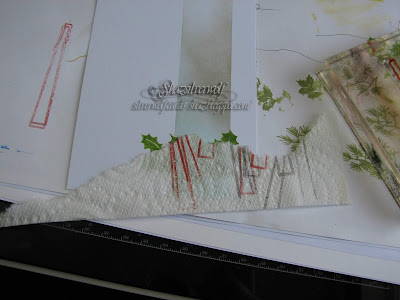 I wasn't going to cut masks for the holly leaves, so I tore roughly a sheet of kitchen paper, and used that to cover the holly. 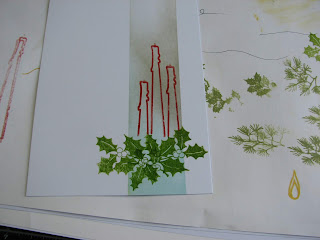 Any spaces left between the candle and holly I could draw in afterwards. I'd stamped in Distress Archival Ink Barn Door, so I could use the Distress Marker for that. 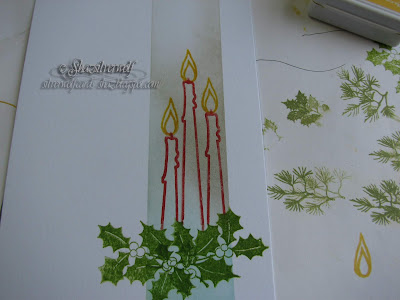 Finished the stamping by adding the candle flames, then coloured the candles with the Prismacolor pencils again.


I also added some half pearls to the holly for berries, and then finally some Glossy Accents to the flames, sprinkled with a tiny bit of Glamour Dust for some sparkle. 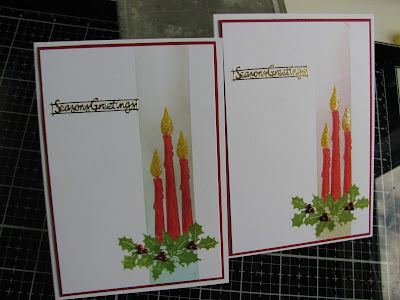 Again, I added a peel off greeting. Partly because I'm trying to use them all up, and partly because I forgot about heat embossing until I'd matted & layered the card front, and the heat would have released the adhesive!
So, after starting with 3, I ended up with a massive 13 for this fortnights challenge.
By shazsilverwolf - March 29, 2020

Hi Shaz, what a wonderful array of cards, you've been very busy and your designs are beautifully done, all so different, I couldn't begin to pick a favourite.
I hope you are both keeping well and safe Kate x

amazing cards Shaz - such a lot of work here and all very beautiful! Hugs rachel xx

WOW you've been busy with this challenge Shaz. I love them all and well done on sorting out your masking on the last they look fab. Keep safe and well Zoe x

Wow, a perfect Bakers dozen. Each set a delight to look at. My vote goes to the the Celtic candles. Very impressive with those backgrounds. Stay safe and well and keep on crafting . Your blog needs you. Hugs Mrs A.

These are all so beautiful Shaz, you have been so busy creating them, can you send some inspiration my way perhaps? :) I've been a bit lacking in that area lately.
Keep safe and well,
Lorraine

These are all gorgeous, Shaz! The number of cards you got finished is amazing!

I think my faves are the celtic knot ones. That is one fabulous stamp and the sponged strip behind them is amazing.Thanks for taking part in the March Rudolph Days Challenge.

All your cards today reflect your very creative, and arty personality! One of the best things about virtual friends is that you so get to know them from their posts and from their creations. Sure enjoyed visiting your blog today!

What a great set of cards. I really like that last set!

I have indeed done some more stamping of those inked panels from last week. Actually, a few weeks ago, but only started using them last week... 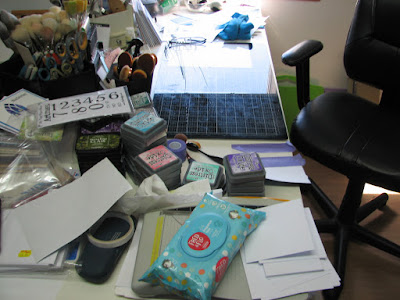