Clearly Better- A new type of ink for Clear Stamps 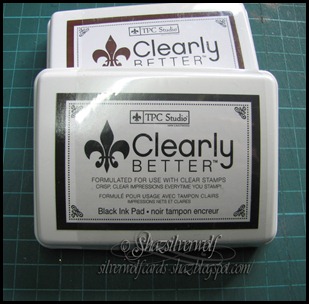 I'd seen a few mentions of this inkpad, and had news of it in a Chocolate Baroque newsletter. As clear stamps can be most awkward to get a good print from (even assuming a good stamp quality), I thought this worth a try. Generally people seem to advise using a chalk ink to get a good imprint, but equally, Tracy from Lavinia stamps swears by, and always uses, Versafine.

I have a selection of Black dye inks, and to be honest, my go-to for clear stamps is usually Versafine Onyx Black. 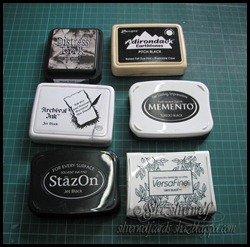 So these are the Black dye inkpads I have, and they are what I have used to compare the Clearly Better inkpad to.

I  used two Lavinia Stamps , Secret Garden, for a 'line' stamp, and Willow the Witch, for a 'solid' stamp. It does seem that solid silhouette type images present the greatest challenge  to getting a good, clear print, and there is little more annoying than ruining a piece with a print that has light patche 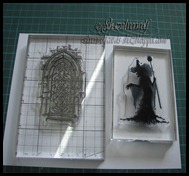 And I wanted to see if the inks gave a good print on both styles of stamp- I don't want to have to use two types of inkpad when stamping  something.

I stamped onto Neenah card for all the images, so it is possible that the results may be different on other cardstock. I also went over both stamps with an eraser first, and then with some low-tack tape, just to give them a good clean.

Before I stamped with them, I re-inked both my Staz-on and Archival pads, but all the others were plenty well inked already. 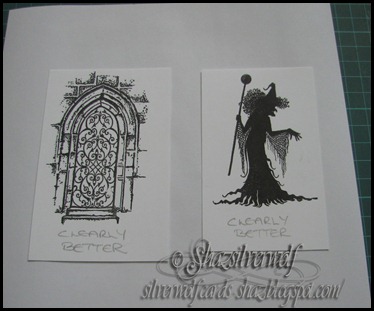 So this is the first two prints with the Clearly Better pad.  Both images came out well, and definitely I got a good solid image.    All the following pictures show the same two Clearly Better images with a comparison to another ink pad. 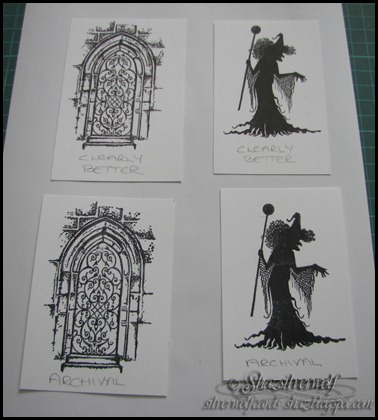 Here the comparison is Archival Jet Black. Not perfect on the solid image, a little blotchy in one or two places, but the line image was fine. 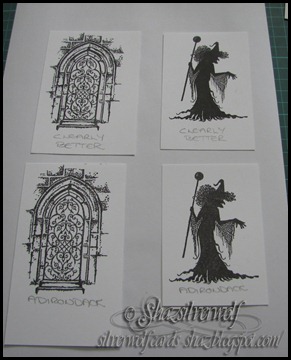 Next up is Adirondack Pitch Black, and again the solid image isn't as solid as I would want. 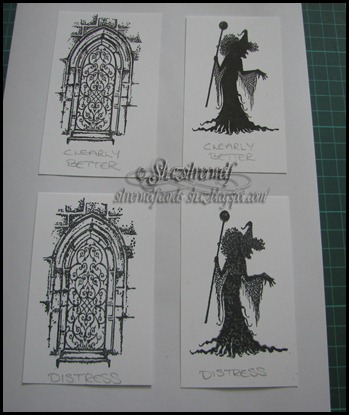 Here it is up against Distress Ink Black Soot, and you can tell even when inking the stamp that the ink is too wet to get a good solid print, but if you want a nice worn image, it would work well. But the line image is a good one. 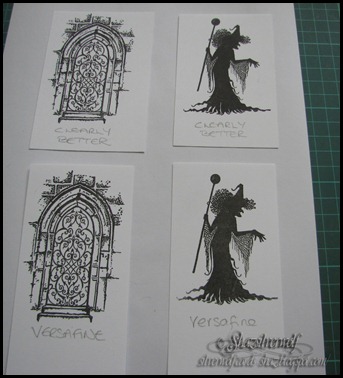 Now we come to Versafine Onyx Black, and this is by far the best image so far. The solid print is solid, 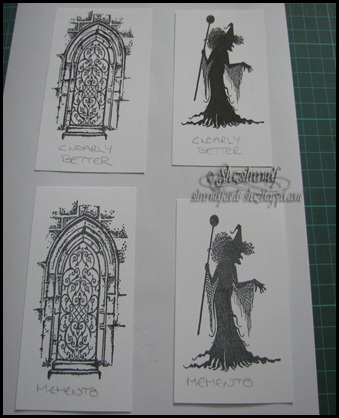 and the line stamp came out well too. 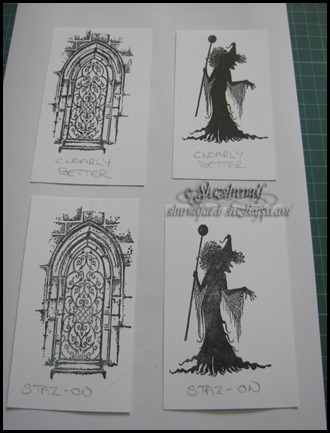 Final print is Staz-on, and I was really not impressed. You recall I had re-inked the pad before I started, so I did expect a better image, to be honest. 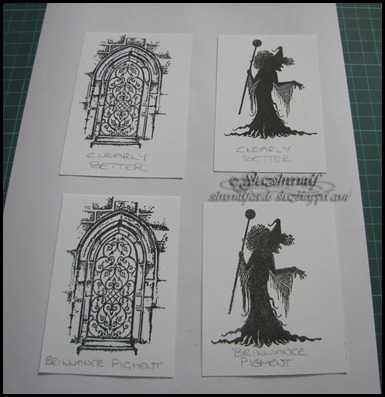 One final try-out, I spotted a Brilliance Graphite Black Pigment Dew Drop pad on the shelf- but again, a slightly blotchy print on the solid stamp. 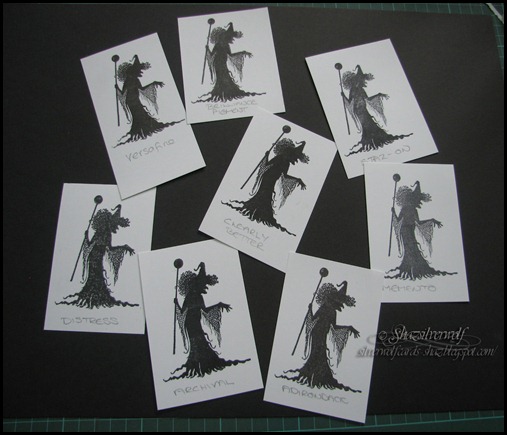 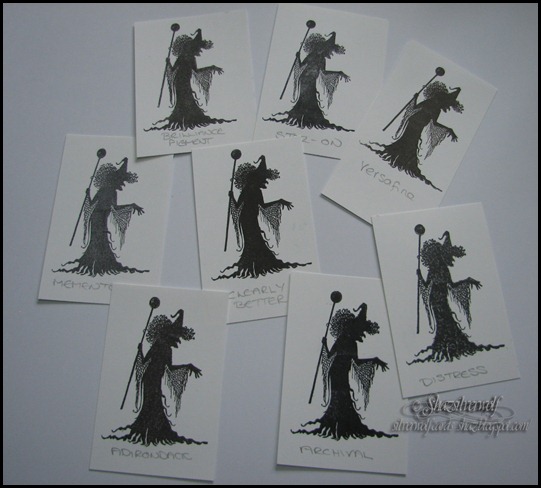 So here are the final prints of the solid stamp, on a black and white background for contrast.

And the line stamps, also against white, then black. 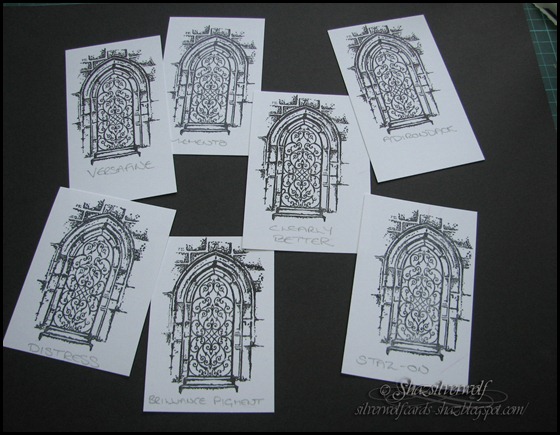 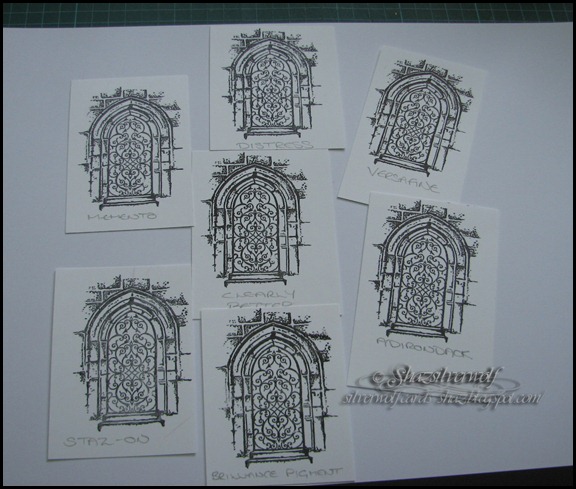 Overall, the line image came out fine with all the inkpads.I'd be happy with any of them on my projects. But, the Versafine and Clearly Better inkpads gave the best print with the solid image, followed closely by the Archival. It was hard to see the blotches on the Archival, and maybe it was just how I inked the stamp? So if you already use Versafine, I don't see any real improvement in changing to the Clearly Better.

But if you do want a good pad for clear images, then I hope this little trial helps.

Which brings me to one thing that really annoys me, to be honest. The difficulty in getting re-inkers in the UK. Distress re-inkers are available everywhere, easily. But the rest? I know Versafine pads last for ages (I've had mine years), but, when I do find it getting pale, I cannot get a re-inker for it over here. In the USA, they are readily available, I know only for the Black & Sepia, but that would do. Hardly anywhere in the UK has a good range of re-inkers, and obviously that means they sell more inkpads,but on an ecological level, I dislike having to throw something away that I should not have to. And ordering a few re-inkers from the US is hardly ecologically friendly, is it? So if anyone knows a craft store, or stores, that actually do have a good range of re-inkers, I'd love to hear about them.

NOTE:     27 Oct 2012, had an e-mail newsletter today from Chocolate Baroque, the Clearly Better inkpads are being discontinued! I will leave the post up as it is though, as at least it gives a comparison between the other pads.


SECOND EDIT:
I was re-reading this today, as I wanted to post a link to a discussion on black inkpads on SCS. I wanted to add for British readers, if you want an online store with a very good range of re-inkers, can I recommend Countryview Crafts?
Susan, the owner, is a very helpful lady with any products she doesn't actually stock, so if you can't find something you want, drop her an email. I wanted to get reinkers for all my Adirondacks, which are being retired, and after I'd bought all the ones on her site, I enquired about a few she didn't have. I got a lovely email back, and she ordered in the ones I needed. Brilliant customer service, and her site is free UK shipping too.
By shazsilverwolf - October 07, 2012

Thank you for commenting on my blog! I love your tutrial for the inks for clear stamps - thank you so much! I always have problems with clear stamp stamping - so much I have stopped buying them - will try the new ink and see how it goes!
Hugs,
Cardarian

Excellent comparisons! This was really helpful. Off to find a Versafine ink pad...

Thank you so much for sharing this page link on SCS. I think of myself as a newbie to an Novice. I do well enough that folks don't really realize that I'm not a seasoned stamper.

This has already helped me tremendously, figuring out what I may have been doing wrong at times. Thanks again Shaz. Love it!!