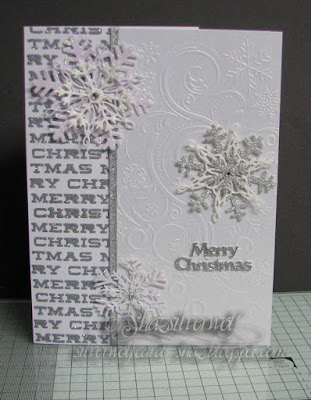 Putting all of those snowflakes to good use, and this is the first 3 cards made using them. They were inspired by a card I spotted on Pinterest back last week.

This is the card that I saw, and it was mainly the embossing folder that caught my eye, as I have that one.  It's by Darice, called Snowflake Swirl.

The cardmakers name is Carol, and her blog is Our Little Inspirations. 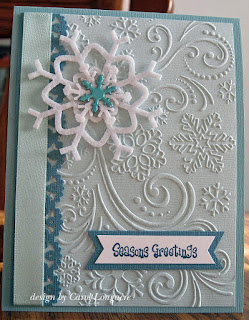 I think my card is made larger than hers was, as I needed to add some embossing to the lower part of the piece of cardstock I was using. Mine is based on an A4 sheet of cardstock scored and folded.
A few weeks ago I did some stencilled sheets using the Tim Holtz Merry Christmas stencil with silver embossing paste and sprinkling it with Crystal Glamour Dust, but they weren't long enough for this so I needed to do some new ones. 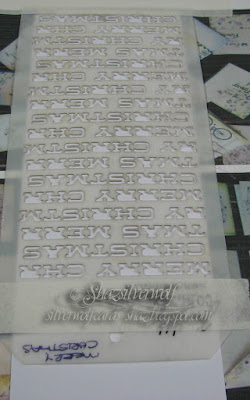 I found this stencil best to work with upside down, as the tiny parts of some letters- notably the 'R' and 'M', can easily get caught as you spread the paste. This also applies when cleaning them, you do need to be very gentle to avoid bending them.

I also had to do each one in two sittings, as the stencil wasn't long enough for my card front, but they only take about an hour to dry.I tried with the first one doing the whole strip, but it's impossible to do without smudging the paste you've already laid down.
As you can see, epic fail! 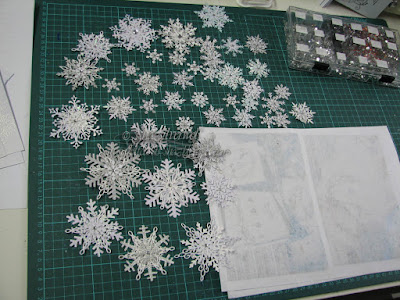 While I was waiting for the paste to dry, I made a start on layering up the snowflakes. They're not all for these cards, I have another set planned. There are 3 or 4 snowflakes used in each one. 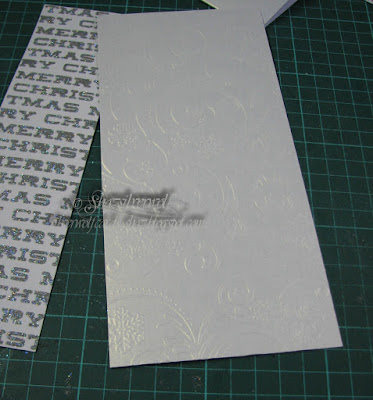 I trimmed the strip down to roughly one third of the card width, then trimmed the embossed panel down to fill the front.


Both were attached with DST. I added a very narrow strip of silver ribbon to cover the join. For that I cut some narrow dst roughly down the centre, and added that over the join, then wrapped the ribbon around the card front, siting the join where I intended to place the large snowflake at the top. 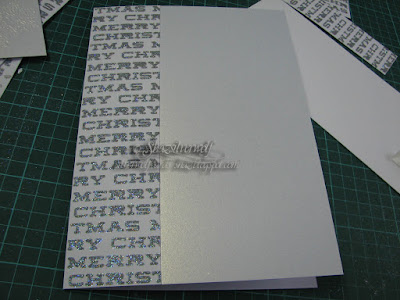 The card base and the embossed panel are both Pearl White cardstock. 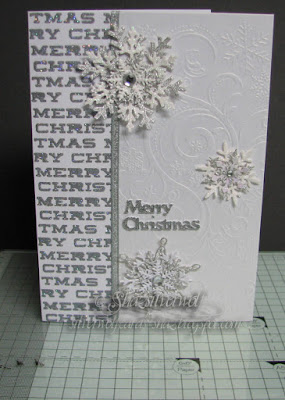 The sentiment is a Crealies die, and I cut it 3 times from white cardstock, and once from silver glitter and layered them up for a dimensional sentiment. I added a tiny acrylic jewel as the dot on the 'i'.


I also did a couple of stencilled sheets using Glossy White stencil paste- both this and the silver are by Sweet Poppy- and again sprinkled with Crystal Glamour Dust. 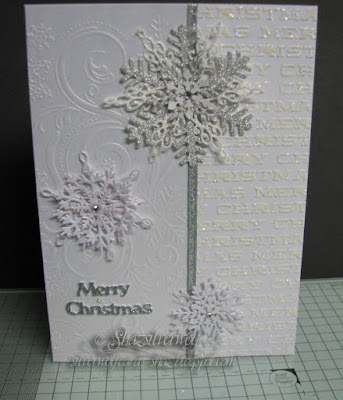 So I changed it up for the third card, using the white sheet, and swapping the sides round too. In each case the ribbon join is under the large snowflake.

A small acrylic gem in the centre of each snowflake finished them off nicely.
By shazsilverwolf - October 16, 2018

Gorgeous cards. I like how each one is different as well.

Your cards are just stunning with all the sparkle and work/time you put into them! I am truly honored that my card inspired you to create these, and thank you so much for the shout-out too! You've just made my day :) xoxo

Lovely cards, Shaz. I like the combination of embossing and stencilling and the snowflakes are gorgeous. xx