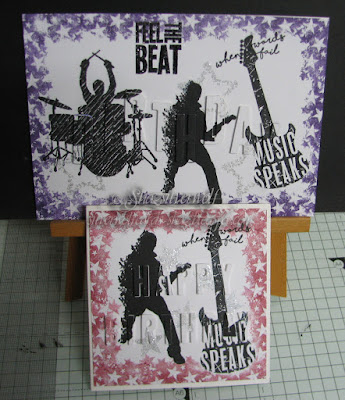 Trying out the Eclipse technique again, this time to make some cards that would be great for male cards, or the female music fans in your life.


It sort of started with a FB friends post from one of her friends, about her younger brother being in hospital for his 13th birthday, and asking anyone who wanted to send him a card to do so, to help brighten his day.


My card is the dark blue one in this pic, with SAM done as the Eclipse. 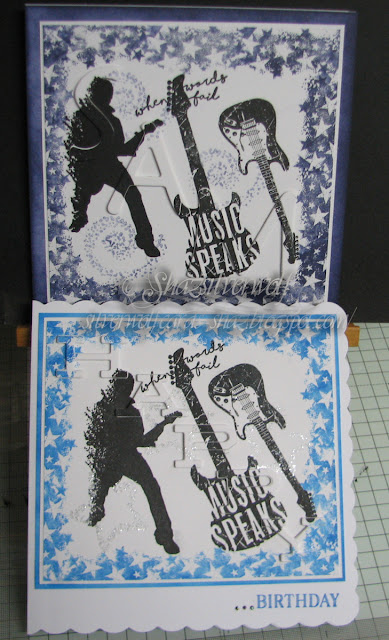 As I had all the stamps and stuff out, I thought I'd make a few more, in different sizes and colours. 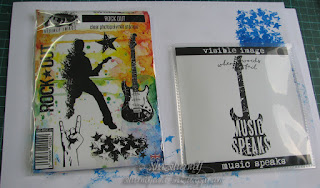 I have the original packets of Music Speaks & Feel the Beat, the packs now have extra stamps in them. 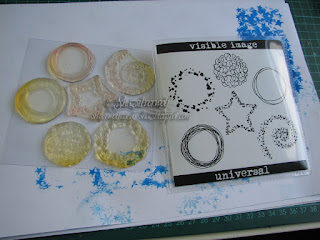 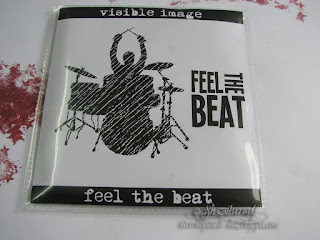 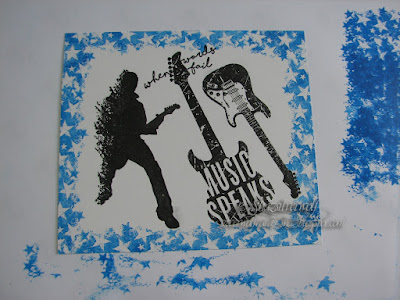 The cards all use the same method, just different colours, and using a different font set for the Die cutting.


I also stamped and cut rough masks for the images. 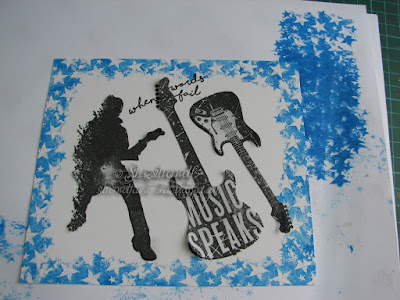 After stamping and masking the main images, I used the star border stamp to go all around my cardstock in Paradise, and using second generation stamping. 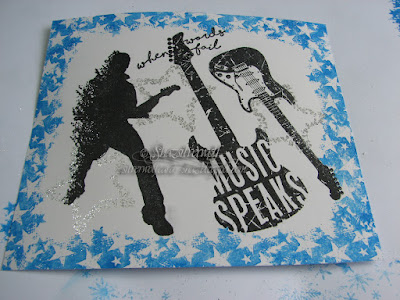 I heat embossed the stars with WOW! Icicle EP. 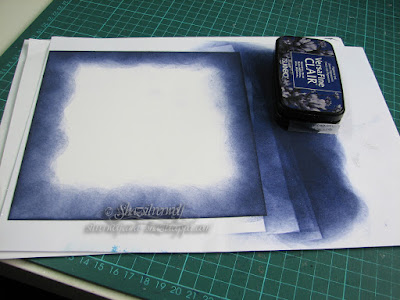 To get a matching cardstock matt, I sponged another sheet of cardstock with the relevant Clair ink, this one was for the dark blue one. Then I matted the image onto white, trimmed to a thin layer, then matted onto this sponged card.

To matt onto this, dst won't stick to the damp ink, so you either need to let it dry, or use a wet glue instead. 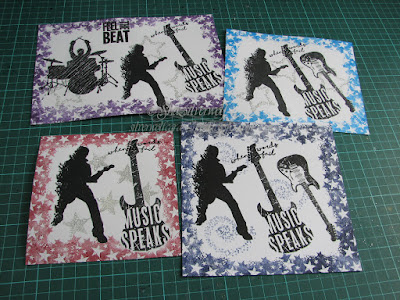 These were the four panels all stamped. A 5,6 and 7 inch square  image, and one A5.
One tip when working with square card bases, if you have bought the ready scored packs. Whatever the measurement given on the pack, it actually applies to the envelope, NOT the card base. So, a 7" square card is really closer to 6¾", so you need to cut your panels accordingly. 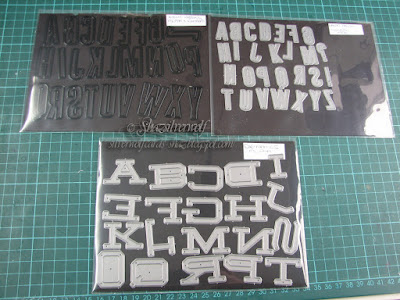 I used four different Alpha dies for cutting out the words, the other set is the iCraft Upper Case Alpha set I used in the NOEL Eclipse cards.
From top left, these are X-Cut Wedding Alphabet & Numbers,
Coles ABC, by Lawn Fawn,
and one by DieNamics called Bottom Line, which seems to be discontinued. 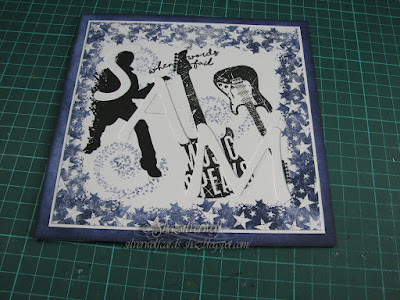 In each case, I cut from the stamped image cardstock, then from white fun foam.
When doing this technique, remember to keep all the little bits from inside letters like A,B and so on, as you will need to replace them into your cut out after you've added it to your matt/card front.
Refitting the tiny inner bits is fiddly with small dies, but makes all the difference  to the finished result.You don't need it from the fun foam. 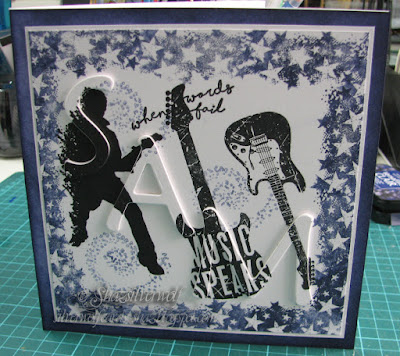 If you don't have fun foam handy, you can use a few layers of scrap cardstock die cuts, how many layers depends how dimensional you want it.

When adding your letters to the fun foam/card stack,it's wise to dry fit some letters first before adding glue. Depending on the font, some letters like O,H, maybe Y or W, can look as if they are symmetrical, but I found they are not necessarily so. 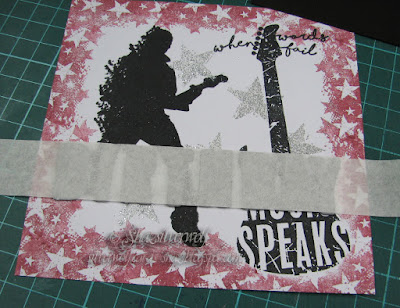 Another tip I found useful. When using smaller letters, Lay them out along a ruler, and a T Ruler is good for this, then gently lay some low tack tape across, and press to the card.  It's also a good idea to actually do this on top of the plate you will be feeding into your die cutting machine.This helps to stop them moving about. 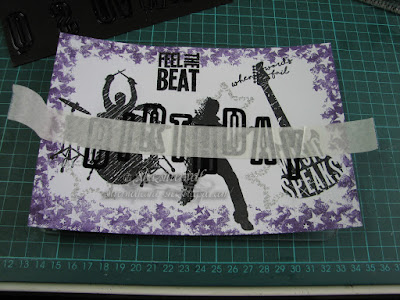 On this one I staggered the letters across the design, but again used tape to hold them down to cut. 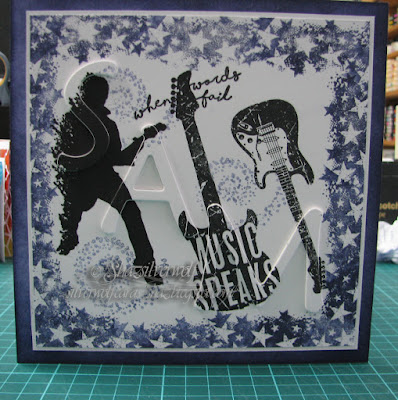 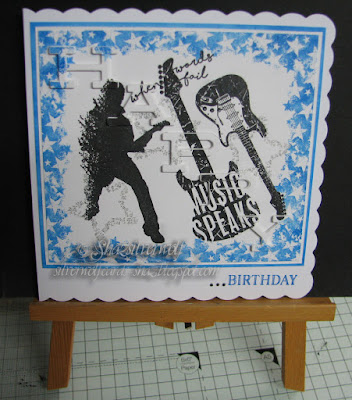 The matt layer was created exactly the same for this one. 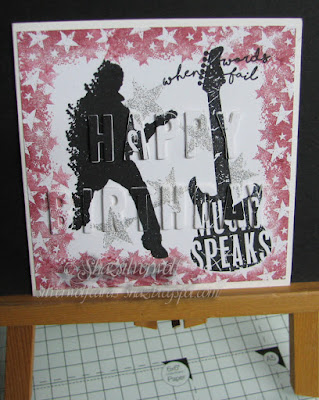 Neither the red nor the purple have matt layers, as the card bases were an almost perfect fit. 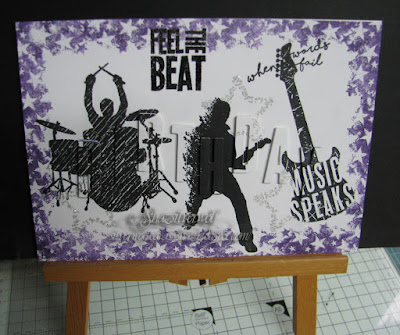 I’m late for WOYWW so thought I’d post here as I’ve read both. Love the eclipse cards, specially the one for SAM, they look brilliant. You’re getting a good cross use from the Clair inks, I shall be feeling empowered if you go on!!

These all look fabulous Shaz, I love how you did the name into the design a lot. :)

Brilliant designs Shaz. Very very clever.
I’m loving my new stash. Though must confess it’s still in bag but have regularly taken it out since home and drooled afresh over can’t believe I now have quite a few of those Visible image ones as had none before. Also went to Hobby Lobby amd Michaels with my friend in Florida a number of times. Visiting people .. dear friends and family is such a blessing, amd meeting them fir very first time when I’ve kniwn you so long. Was such a treat to meet you amd dear Doug. Am still over the moon that my poor old body managed it those first few days in UK were very hard, but God was so gracious and strengthened me through it. Margaret dear pal was absolutely marvellous.
Prayer Hugs and a warm Aussie Hi to Doug too.
Shaz in Oz.x

PS reason it’s not in its homes, crafty stash, that is.. is that my room is a tip.
Same reason why I’m not blogging. Prior to leaving with dad etc and being so time poor everything and I mean everything needs a huge spring clean. When it is Downunder 😊
❤️❤️❤️❤️❤️🙏🏻🙏🏻🙏🏻🙏🏻🙏🏻Xxx

Oooh those cards look amazing Shaz, really cool. That is such a clever trick with the 3D letters, I will definitely be trying that. Have a great weekend :o) Annie C #14

Great cards and very cool looking. I love those images. I just own one but have not opened it yet!
PS Loved the Whitby Abbey stamp you showed on one of your posts. I may just have to order that one!