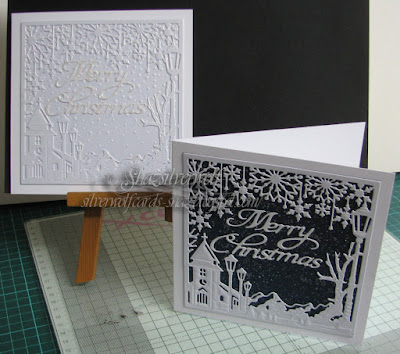 Okay, so this post is a bit late, mainly because Plan A didn't go according to plan at all.  My card design was going to be using snowflakes. Simple, I thought. Die cut some snowflakes and away we go. What I thought was going to take a couple of hours, so far took a day & a half, and that was just the die cutting. I cut more than I thought I needed, definitely, but between the shimming, moving the dies around to find the sweet spot on the platform, and running through multiple times, then poking out all the bits, recutting some that hadn't cut all the way through, my 'simple' idea became anything but. However, now I finally have them cut, the cards will be made during the week. In true Mastermind tradition- I've started so I'll finish! 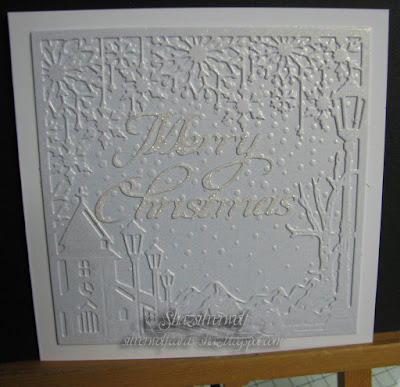 Which brings me to the cards made instead. This week it's Kates choice of theme, and she picked Mono colours.
So we have a totally white version, and a dark blue and white one too.

The die used here is called Village Frame Square, and seems to be branded Amy Designs. Must be right, as a Google search found them at  The Art of Craft.
I cut it from White Pearl cardstock, and gave it a spritz with some Crafters Companion Spray & Sparkle, in Iridescent Glitter.  Next time I cut this, I'll add some Double sided adhesive sheet to the cardstock first, as adding glue to all the tiny bits of the design was slow going. I cut another square of white pearl cardstock and embossed that with a folder called 'It's Snowing', by Leonie Purjol. I'm guessing it's discontinued, as I can't find anywhere with it in stock. I matted the Village scene on top of that, and then both pieces onto a 6" card base.
The greeting is by Presscut, again, next time I'll add DST to the cardstock first. I used a white glitter card, as using the same pearl cardstock left it fading into the background.

Made exactly the same, this time with a dark blue Metallic cardstock background. I have an old stamp that's just lots of tiny dots, so I stamped that all over the square, then heat embossed with Stardust Embossing Powder. Same greeting, this time cut from more white pearl cardstock.


Just for info purposes, these are the snowflakes! 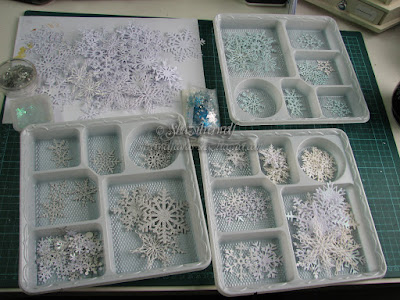 The white pearl ones at the back on the paper have also now been sprayed with the Crafters Companion spray, for a bit of shimmer.

Funny thing is, mainly the worst ones to cut were from expensive dies. Some cheap ones I picked up from The Works,  £4 for 4 dies, cut like a dream.They are quite intricate too. A Sue Wilson Snowflakes die, which is very pretty, very intricate, and not cheap, was a nightmare!
By shazsilverwolf - October 14, 2018

Oh the best laid plans...as they say Shaz, well your cards are stunning in both colourways, gorgeous village die and beautifully designed.
I love the snowflakes, you've made so many of them, gorgeous designs, thanks for palying along with these perfect cards, Kate x

Wow, don't they look different in the opposite colours. The second card is my favourite. Just think how smug you can be now knowing that you have all those snowflakes ready to hand. Hugs Mrs A.

This is a great take on theme Shaz - two great cards - and how different! Hugs rachel x

Two lovely cards Shaz...it’s a fabulous die and how different it looks in the two different colour ways....
Wow that’s a lot of snowflakes...every time I have a bit of white card left from a project that’s what I do...cut snowflakes and add them to a stash for use when needed.....look forward to seeing what you create with yours.....xxxx

Two stunning cards, Shaz. They are so very same and yet so different in looks...but both stunning.

You are going to have such fun playing with all those snowflakes and the kits you have made. Love your organization trays...perfect for storing the individual designs

Both versions are lovely...and the white one is Soooo elegant. I think the white & blue shows off the village scene more dramatically, but you've done a splendid look with both of these. I enjoyed reading your adventures in this post. Sounds like the same stuff I do!!!! TFS & Have a great week. Hugs

Two beautiful cards Shaz. I like them both, but the blue and white definitely shows up the diecut to best advantage I think. Wow! I cannot get over all those snowflakes!! Christine

Fabulous cards Shaz, that festive scene die looks amazing. Glad you persevered with the die cutting though as you seem to be set up with lots of snowflakes now and so organised too.
Lorraine

Sooo pretty, Shaz. I love them both but really like the blue background. Creative Blessings! Kelly