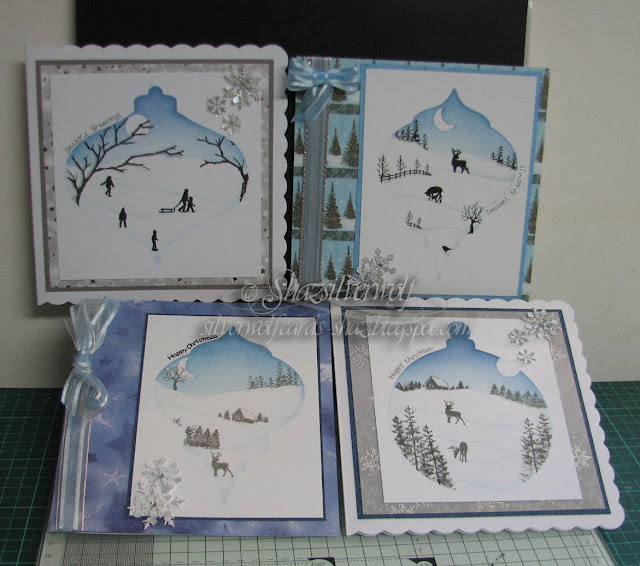 Back with the Christmas Cards, for this fortnights Christmas Card Club, and this time the theme has been chosen by Christine, and she wanted to see a Winter Wonderland.
I created 4 cards on the theme, all using Bauble stencils and Card-io stamps. 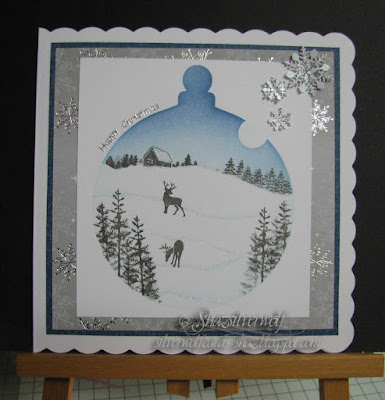 The first one is using a bauble stencil from Inkylicious.
All the sky inking was done in the same way, using a Clarity brush and Distress Inks. The colours were Tumbled Glass, Faded Jeans and Chipped Sapphire, concentrating the colour at the top of the bauble, and fading it out as I came towards the torn paper mask made for the hillside.
The torn paper was moved down the shape, and some Tumbled glass added over the edge with a dry baby wipe to create more hills.
I'd added a moon mask punched from the sticky edge of a Post-it note before adding any ink. 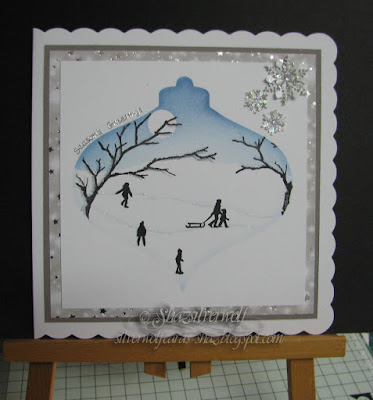 With all the baubles, when I'd finished inking the sky, I used the ink left on the stencil to gently drag inwards all round the stencil the define the bauble shape- a good tip picked up from Barbara Gray!
Stamping is done in Versafine Clair Nocturne.
The backing paper is from a pad I picked up from The Range, some lovely greys & silvers, including some with foil. Was only a couple of quid too. Made use of some more of those snowflakes, and a peel off greeting.
The next one is done with a stencil I cut myself, with a Spellbinders die, Heirloom Ornaments 2011. I recently bought some stencil material from E-bay to do this sort of thing, so now I have a durable stencil. This is the largest die from the set, and I also cut it from copy paper, so that I could swap it for the stencil,and stamp right up to the edges, as even thin stencil material is a bit too thick, and leaves too much gap. Another piece of backing paper from the same pad, this one has foiled stars on. 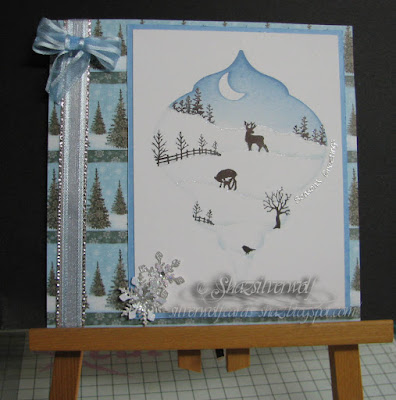 These last two are done with another die cut stencil, this time Spellbinders Heirloom Ornaments 2010. The backing paper is from a really old pack by Dovecraft, and I added silver & blue ribbon on the left. 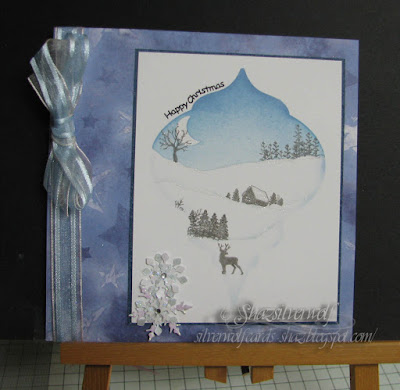 Same stencil, this backing paper is so old I have no idea where it was from!
Forgot to say, all the hillsides were outlined with a Quickie Glue pen, and Crystal glitter sprinkled on. I dotted some onto the trees, and also added it to the cabin roof.
Also, the card bases are 8" square.
By shazsilverwolf - October 28, 2018

Well snap!! I've gone Card-io this time around too. Absolutely gorgeous cards Shaz, I love the different bauble shapes and your gorgeous scenes within them, wonderful stamping and colouring, Kate x

I'm so loving these fabulous little scenes you have created. Each one a msterpiece. Hugs Mrs A.

Fabulous cards Shaz and perfect for my challenge. I love the scenes you have created within the bauble stencils. Sorry my card won't be posted till in the morning. We suffered a family bereavement over the weekend and I couldn't get my head round things.

The scenes created in the ornament are just gorgeous! I love the snowy drifts and the design elements are placed so perfectly on each snow hill! You've got some marvelous shading, both in the sky area and on the snow drifts...they look so realistic, and the shadows stayed soft. The background papers are great with the scene in each card. So beautiful! TFS

These are stunners Shaz - I love them all - the scenes work so well in the baubles - lovely! Hugs rachel x

Shaz, these are fantastic, love the bauble and the delicate nature of the small images really comes together well, stunning.
kyla

Hi Shaz
These cards are stunning... love the cardio Stamps... and your inking ... is fabulous... I didn't know you could buy Stencil material... will look into it
Hugs Sylvie xx

These are all fabulous, Shaz. They are so delicate looking and very,very pretty. I enjoyed readying your tips for creating these scenes. I want to learn to make scenes and liked those tips you shared.

A super set of cards for our theme this time Shaz. Such lovely stamps and a great design using various bauble stencils too.
Lorraine