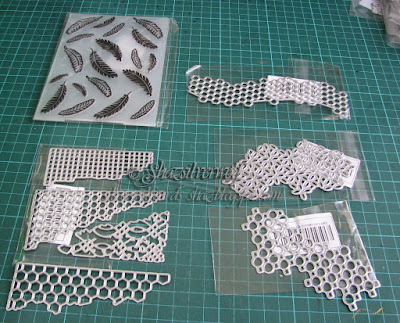 I have a feeling it was on SCS ( Splitcoast Stampers forum) that I saw mention of Aliexpress, on a thread about buying cheap dies from China. All the people who had used it had favourable reports of the dies, and the site itself. So, as you do, I went for a browse. I had originally bought some of the cheap China dies off E-Bay, but the selection of dies available on Aliexpress is incredible. I'm pretty sure there is every type of die you'd ever want on there, including some which are clearly direct copies of some from famous brand names. 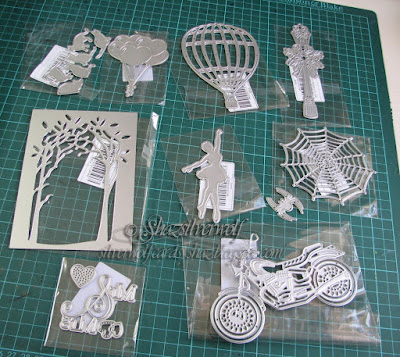 However, I think in all the dies I bought- yes, I did go a little mad- I've not seen any of them elsewhere. Apart from the tree frame, which is similar to a Memory Box die, but that's now discontinued.
I'm a little late with this review, as they arrived when I was feeling poorly, and haven't been unpacked till now.
So, 12 separate dies, 1 set of four dies, and an embossing folder.
Any guesses as to the cost?
It was an amazing £24.97! Shipping was free, and I was very impressed with the packaging too. They were in a poly bag, and wrapped up in a large sheet of foam. 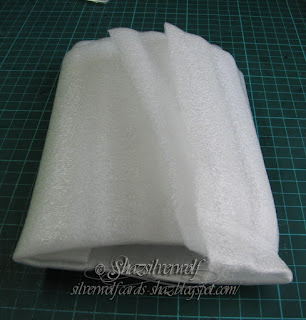 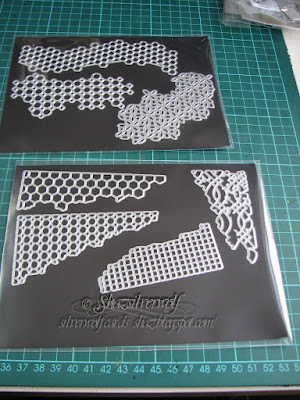 So I have to report no issues with ordering, delivery or prices. As a number of these dies are ones that I will use only very occasionally, I'm very happy to get them as cheaply as these.


The only thing to do now is probably the most important issue, and check on the cutting standard. 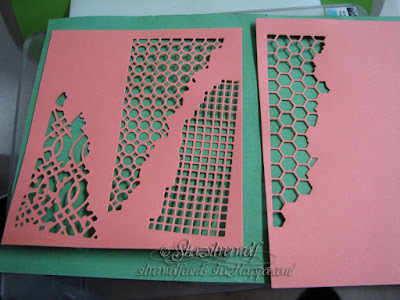 First up is the set of 4 Mixed Media type dies. They gave a clean cut, with just a few bits to poke out. I'd usually help this process by using either Waxed paper, or a Tumble Drier sheet, new or used, both work fine, between the die and the cardstock, but for the purpose of trialling the cutting ability I wanted to use them 'as is'.
Impressed with the cuts, especially on the tiny squares one. 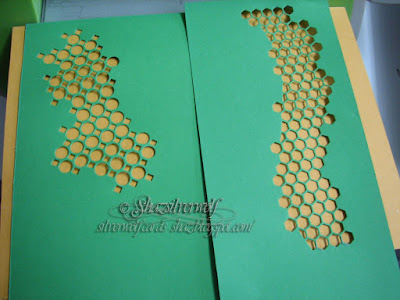 The Honeycomb corner completes the set, and I had no cutting issues at all- all cut cleanly and needing no shimming, just the standard cutting sandwich on my Cuttlebug.


Followed by the circles and the long narrow Honeycomb. As before, clean cuts, no shims. 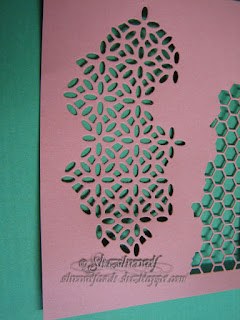 This is the flower-like cutting die, again, good clean cuts, no shims. 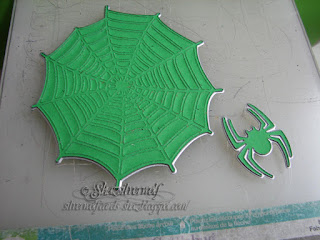 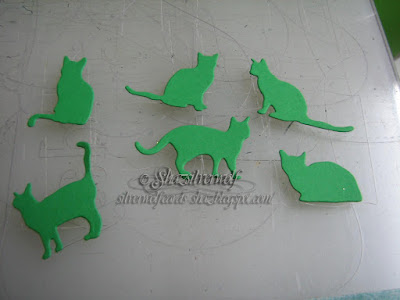 Next up, the spider & web. This one most definitely would benefit from waxed paper/drier sheet, as while it cuts cleanly, the 'bits' do need poking out, and the web is very delicate to remove from the die. But like the others, clean cuts and no shims.


The set of 6 cats cut cleanly and popped straight out of the dies. No shims. This set came all joined together, and that was how I cut them, and I think I shall leave them joined. 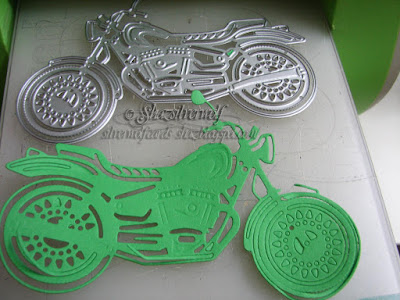 The motorbike, and the first one that needed shimming to get clean cuts. You can see here a few parts, particularly on the wheels, did not cut all the way through. Shimming with a single sheet of cardstock fixed this easily though. 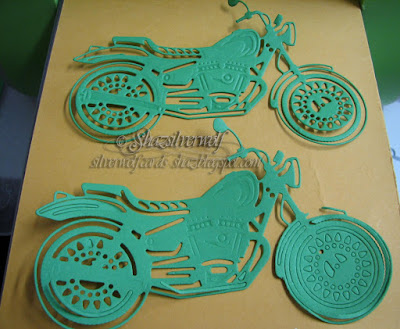 Top die cut is after shimming, bottom one before.You get some nice embossed engine detail too. 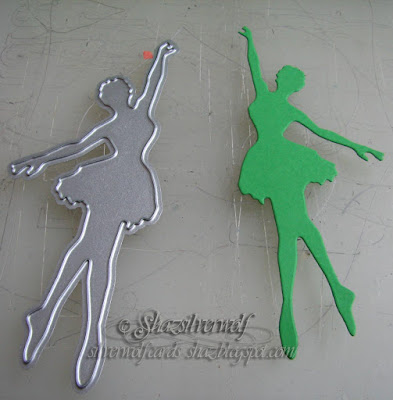 The ballerina cut and popped out of the die easily. 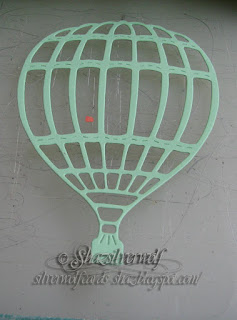 The hot air balloon also cut cleanly and needed no shimming.This will be a great one for paper piecing, I think. 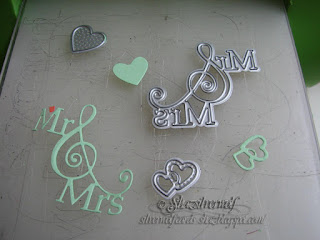 The  Letters cut cleanly, as did the little hearts that came with it. 
The eagle eyed amongst you have probably noticed cut marks on my 'C' plate- evidence of the times I've put the die and cardstock in upside down! 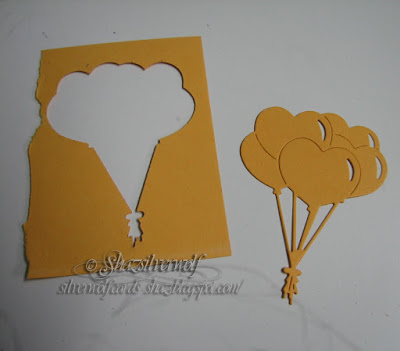 The bunch of balloons, a clean cut, no shimming, another one which will work well for paper piecing, and the front balloon cuts all the way through, so could have foam pads/silicone glue put behind it and give some dimension. 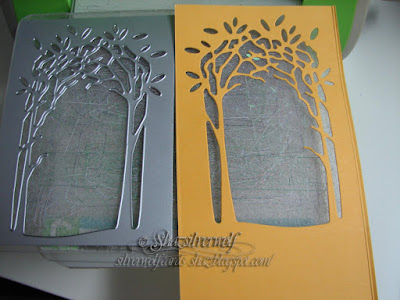 The final die, a tree frame. I'd been looking for one of these, a Memory Box die, which is oval rather than oblong, but it seems to be discontinued. However, this is a perfectly fine replacement, and cut perfectly.

You can see my well used 'B' plate underneath! But it still works just fine.


So that's all the dies trialled, and only one, the motorbike, needed shimming. Some, like the Mixed Media type dies, would definitely benefit from the waxed paper/ drier sheet, as although they cut cleanly, you do have a few bits to poke out. 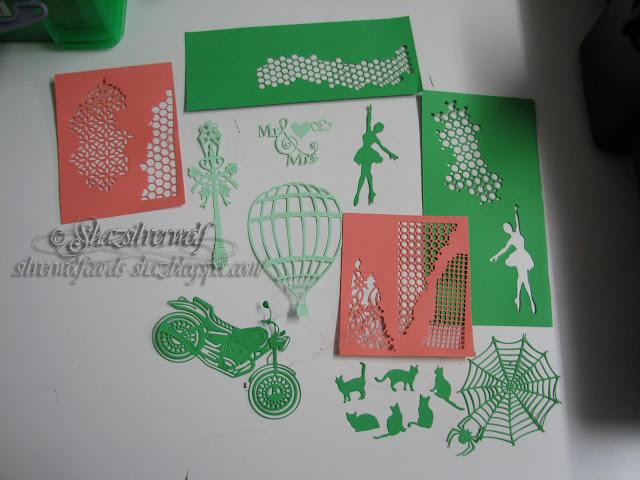 So, if you're wondering if the Aliexpress dies are worth a go, my answer is a resounding Yes. I have no complaints about either the shipping times, the cost, or the cutting.A total of 16 dies,and an embossing folder, at a cost that you'd normally pay for a couple of 'Big Name' dies works for me very nicely, thank you.😀
Just so you know, there are 49 pages of dies, with 36 dies to a page! Plus, they obviously update & add dies regularly, as I've just been back and there are loads of new dies since I last visited, about 6-8 weeks ago.

What a super collection of goodies. You will certainly have plenty to play with.
Toni xx

Thank you so much for your review Shaz, and ou collection is fabulous. I don't get along with many of the Creative expression dies and I've wasted not only paper and card, but loads of money too, a very informative and helpful post, Kate x

Oh Shaz, you have been having fun on Aliexpress, and you are a temptress, I will have to visit them now. Really liked the Mixed Media types, they really do make a simple card look quite special.
Chris

Thanks for sharing Shaz! I too am thrilled with the selection of dies on AliExpress and see no difference in the quality of how they cut, compared to the more expensive ones I have bought elsewhere. I have gone maybe a tiny bit overboard since I found AliExpress a couple months ago!

I saw a random post somewhere that talked about how that thin foam sheet your dies came packed in, can make even the most intricate die cut cleanly. And they are right! No need for paper shimming or multiple passes if you put a piece of foam into the sandwich. You place it between your card stock and the B plate, so the foam ends up being partially cut through when you run your die sandwich through. And as a result the paper (which has the cutting edge of the die above, and the foam below) gets cut perfectly! I bet if you try that with your motorcycle die you will have good results.

Looking forward to seeing what you create next!
Tina

Im late for WOYWW so am commenting here instead of publicly accusing you of enabling again on FB!! These dies are awesome, I particularly like the mix media types. Lovely lovely pics from the wedding, so impressed that the beautiful bride hung on so well! SHe did indeed look radiant, and then welcome to the world, baby gal. How lovely.

Thanks for the review Shaz. Now I need to go shopping again lol. My next question on WOYWW will undoubtedly be what's a goodcwsh to store dies ... take care Heather x

Hi Shaz, another great review... thanks to you we now get eBay China dies and loos like Aliexpress will be next.
I’ve always refrained from buying from time hem because they don’t take PayPal...

However I just did some research now and four they have their own sort of PayPal system and if you buy through it they hold money from seller till you’ve receive item and checked it out, so another secure pay and use proper verification in card protection. However as I read it it has to be selected ... you maybe did this without knowing.

Here’s the article so you can read for yourself.
https://alixblog.com/en/aliexpress-paypal/
Perhaps might put my big toe in water and see. I’ve had my card hacked buying online and it all not at all nice so reluctant to have a repeat episode.
Hugs and prayers Shaz.s

I would like to thank you for the efforts you had made for writing this awesome article. showbox apk 4.93 download

Unlike other blogs I have read which are really not that good.Thanks alot! download mobdro premium apk