First Shaker card, or a Comedy of Errors! 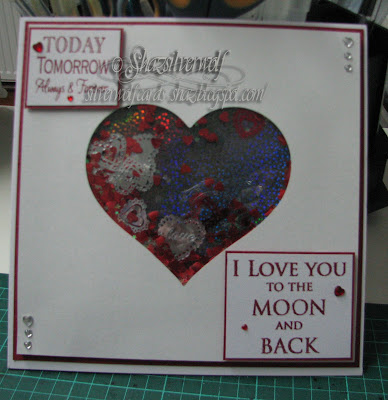 A pretty accurate title as you will see as we go on.
I've long been meaning to have a go at a shaker card. Having seen them made in numerous crafting videos, I decided it looked pretty straightforward.
And it is, as long as you remember one simple detail- forward planning!
However, I think mine had gone off for a day trip somewhere, leaving me to fend for myself. 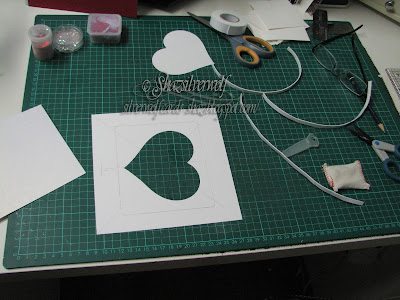 So, lets start. My base card was going to be an 8"x8" square, so I cut a separate sheet of Pearl White card to fit the front.  That is one thing I do remember- always measure your card base first before cutting.
I've found the measurement given for card base packs seems to be the envelope dimensions, rather than the card, and it's annoying to go to assemble your card, only to find the front panel is bigger than the base. 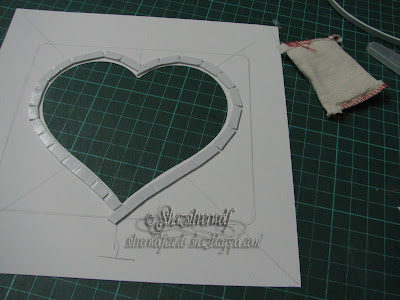 So, that bit done, I then decided I wanted to matt my white pearl onto a red cardstock, so cut the red, then trimmed down the white pearl cardstock. See,stage 1 and I'm already tripping over myself.  I used a Sizzix Heart Steel Rule die I've had for years to cut the centre heart out, after I'd marked the die position on the back of the card, along with corner to corner & side to side lines to make sure I got it as central as possible.

Next the foam tape to raise the cut out. I have some rolls of foam tape- Poundland, 2 rolls and about 10 sheets of mid sized foam tabs for quid- I took a strip and cut it into 3 lengths. Then as I laid it down, I snipped at intervals to allow it to bend around the shape. I thought using the tape I didn't have to worry about any gaps between foam pop dots letting the filling leak out.By the way, the embossing bag was there as I used it to wipe over the inside edge of the foam tape to stop the filler from sticking to it. 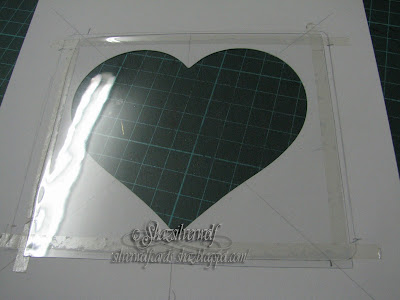 Amused myself that I thought of something that small, yet missed important stuff.😀 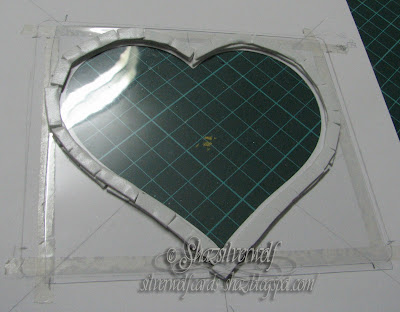 So, I have one layer down on the reverse, and decide it needs two to give the filling enough room to move about. I'm halfway round with the second layer, when something occurs to me. I should have attached the plastic/acetate/film front to the reverse of the cardstock first!  Fortunately, I hadn't pressed the tape down firmly yet, so I carefully peeled it back off, and put to one side.
I cut a square from saved Embossing Folder packaging, and stuck that in place with DST. 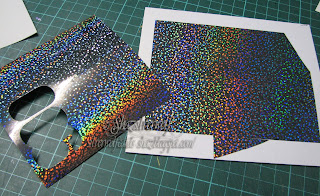 Then I put the foam tape back, on top of the plastic this time.

So that was error number two so far- but I'm not done with them yet! 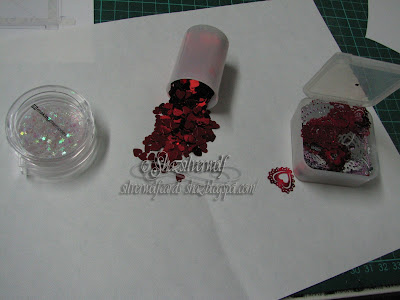 Now we are onto the backing for the shaker, and in my Peel off stash, I remembered some holographic  peel off sheets.    Trimmed some off the sheet, and used it to cover some spare white card.

Having a look in my stash, I sort out some tiny stars, some small and large hearts. All are those little bags of confetti for tables at parties. You can tell how long I've had some of them- that tiny hearts container used to hold camera film. Remember that? 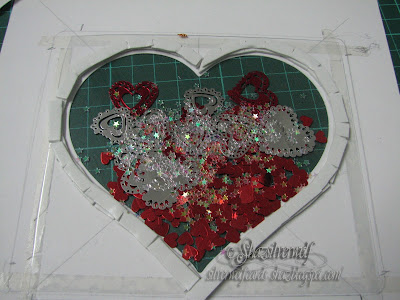 Sprinkled some of each confetti into the opening. I can just imagine my face,had I still not realised about the plastic!


Peeled the backing tape off the top layer of the foam, and added a larger  foam tab to the four corners of the backing piece, then lay it on top. 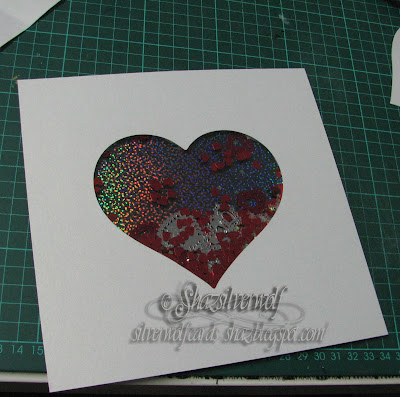 Turned it over, and this is when I realised the next mistake I'd made. I intended to stamp the two sentiments in the top left & bottom right corners.

But now these two layers were together, I wasn't going to be able to stamp there, it wasn't a level enough base.
I should have done the stamping after I'd cut out the heart, before I did anything else. So now we're onto Plan C. Or possibly D, I've lost track. 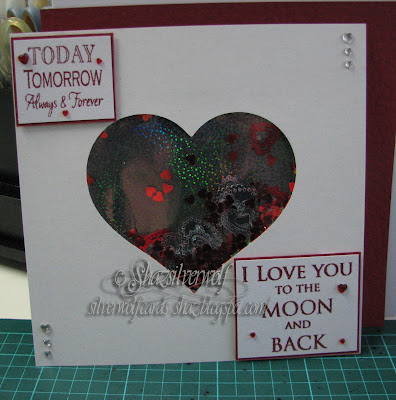 Finding a piece of the white pearl card, I stamped both sentiments, then trimmed down and matted onto the same red cardstock as the matt layer for the card, and mounted them with foam pads.
The inkpad was Memento Lady Bug, and I heat embossed it with WOW! Sparkling Poinsettia.


Matted it onto the red layer with foam tabs, that attached it all to the card base with DST.

As if the bling level wasn't high enough, I also added some acrylic hearts with Glossy Accents.


Hubby loved it, sat shaking it for a while, trying to separate some of the larger hearts that had wedged on top of one another. Said it was a bit like those kiddies games where you have to tilt and turn them to get little balls into indentations, lol. 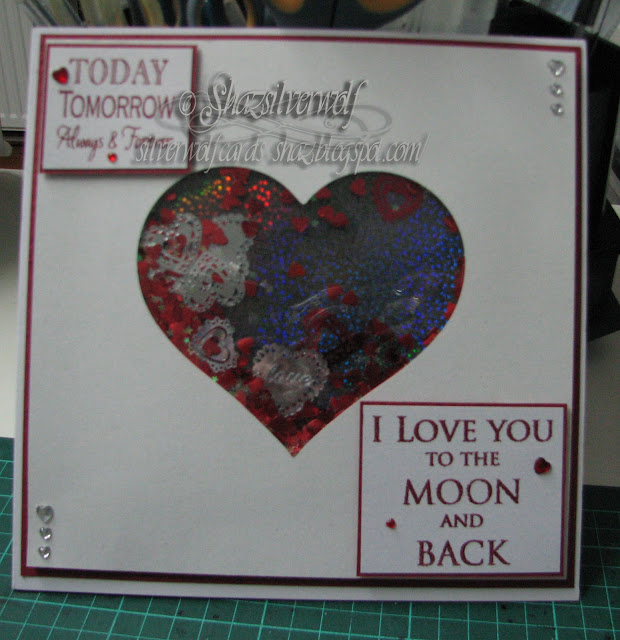 Stamps:
I love you to the Moon & Back, Stampasaurus
Today Tomorrow, Inkylicious, available in 2 sizes, this is the larger one. The smaller one is about the same size as the one top left.

It was a beautiful card so all that grief was worth it! Isn't it weird how some projects flow and others are like pulling teeth.....just ask myvseam ripper 😉
xxxx

It turned out beautifully even with all the twists and turns. Shaker cards are so much fun once I get the right order of things and like you, I have done some of those mistakes. All learning curves.
Hugs,
Myrrna

heheheh you did make me chuckle with your story - but it was worth it in the end as your finished card looks fabulous :o) Annie C #10

Haha reminds me of my experience of making a first time shaker card. If it was for your other half I bet he was thrilled with it.

Awesome card and thanks for making it just like I did. I spent a lot of time sitting and scratching my head wondering how on Earth such an easy card turned into a two day project! Mine turned out ok but I haven't been tempted to do it again - until today. Maybe tomorrow!! Have a great day full of blessings and Happy card making.

Absolutely beautiful Shaz, love your design and all these little hearts to shake, Kate x x

Great card, Shaz! The tutorial was read very carefully here, as my shaker cards always have the shakers stuck to the foam tape.
Thanks for the tip about dusting the inside edge of the foam tape!

Fun card and I'm sorry you had issues with putting it together but am heartened to learn I'm not alone in struggling with the mental process to build a shaker card. Worked out very well in the end. Zoe x

Hi Shaz, Oh my your Comedy of Errors had me laughing. I was nodding along, thinking, yep I would have done that, and that, and that ... Your card turned out beautifully, and I now have a list of tips for if and when I decide to make my first shaker card! Thanks very much for the detailed tutorial. I love your blog! Heather xx

Well you did a lot better than I would have with this shaker card. Looks very nice! xoxo

This fortnights challenge has been chosen by Elizabeth, and she'd like to see Holly and/or Ivy on our cards. We also are welcoming a new... 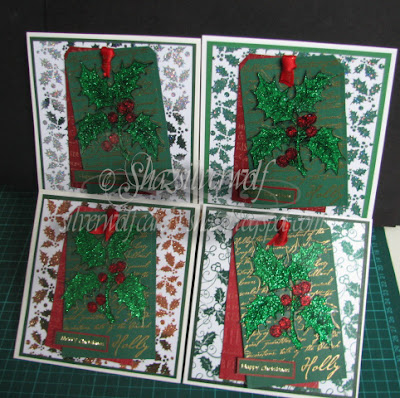