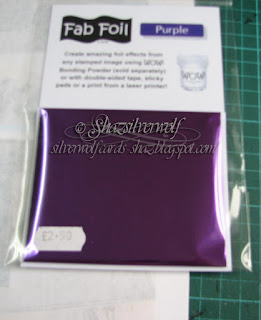 Back with the foils, and some experiments with glues, and stamping. One thing I realised, is that as you can add these foils with an Iron, that opens up the ability to use them in scrapbooks, art Journals and even possibly canvases!


By the way, I found out that WOW! Embossing Powders also make a Hot Transfer Foil,called Fab Foil, and the packs are 1 Metre x 10 mm, cost £2.50, and come in quite a range of colours. Sorry the Purple foil pic is a bit fuzzy, I think it's all the reflections. 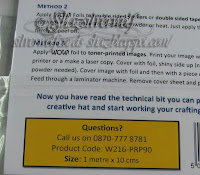 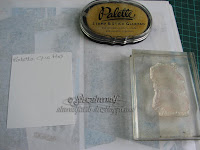 Anyway, I have a couple of glue pads, one is called The Essential Glue Pad, by Tsukineko, and the other is a Palette pad. I've never had much success with either one, to be honest, so I thought trying it with the foil & hot iron was worth a shot. I also tried some glues I have for Gilding flakes & so on, a Honey Doo one, one from Indigo Blu, and one from Sweet Poppy. 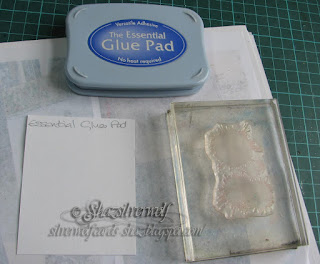 Then I had another thought. I wondered if it was possible to stamp with Stencil Paste? And guess what? It is! 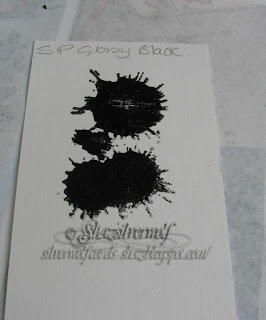 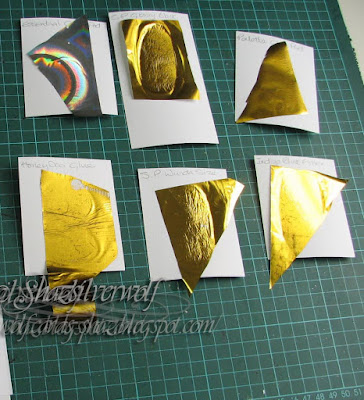 So here are my 6 experiments. I wrote on each card what glue I was using, then used scraps of foil over them. From left to right, top to bottom they are: Essential Glue Pad, Sweet Poppy Stencil Paste, Palette Glue Pad, Honey Doo Mixed Media Glue, Sweet Poppy Wunda Size,and Indigo Blu Flitter Glue. 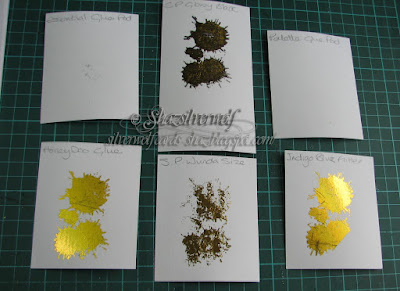 The big reveal. As I pretty much expected, the Essential Glue Pad & the Palette pad were a total fail. Even though the Essential pad says 'No Heat Needed', I've never had much luck with it as a straight glue, so this was no worse.

The Sweet Poppy Stencil Paste worked really well for being stamped, so this has real possibilities.
Bottom row, the Honey Doo and Indigo Blue glues both took the Hot Foil really well. 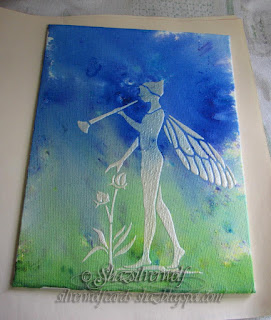 The Sweet Poppy glue I may have put on too thinly. I also realised it seemed very liquid in the bottle, and I'm sure it was thicker than that before, so it may just be past it's best. At the least, I need to try it again in case it was just me.

The last thing I tried in this session was on a canvas. I had some I'd stencilled on with paste a while ago, so gave one a try. 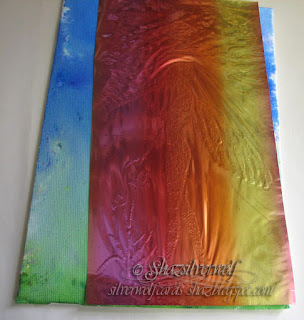 It's a canvas board, and I probably ironed it for about a minute, as it was so much thicker than cardstock. 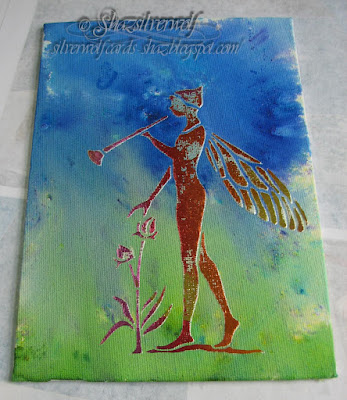 This was the result. Not a perfect transfer at all, but I think that may be due to the textured nature of the canvas. I recall all the info I read about foiling did say you needed a smooth surface. Or maybe the paste needs to be fresher than this was?
But I think it could work well for giving a distressed look, or if it was added in small patches, for instance on the wings.

So all in all, a few possibilities raised here, and I have some more experiments drying right now. I want to see if my Dreamweaver pastes work for this, and also if regular press-down foils work this way too.

All these were done with an Iron by the way.

Thanks for sharing the results of your experiments. So many possibilities of how to use the foil, very exciting. Hope you are keeping well x

Thanks Shaz - interesting and informative. Thank you for all the work you put into this for our benefit.
Hugs, Neet xx

Thanks for doing all these posts Shaz, I’m doing a read up on foiling as going to give it a go one day.. eventually. Finding your tests successes and fails very interesting indeed! Hugs Shaz in Oz.x ps you did most of them when I was away last year in Aug/ Sept and not well in Oct after it all!
Hugs Shaz in Oz.x