Sylvie has chosen this fortnights theme, and given us a lovely wide ranging brief- Anything Goes. 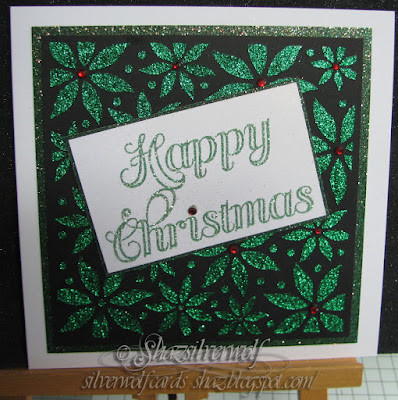 Had a think about it, and decided to re-visit a design I made a few of last year, especially as I had stencil paste out on my desk at the time!


The stencil itself is from Imagination Crafts, and is called
Poinsettia Multi. Instead of adding glitter on top of the wet paste, I mixed it into the paste itself. Makes the whole process a bit less messy, and as long as you have some small sealable pots, you can store any excess.You get better glitter coverage too, and it doesn't shed either. Plus, it's way cheaper than buying glitter stencil paste, which was what originally set me off with this idea. 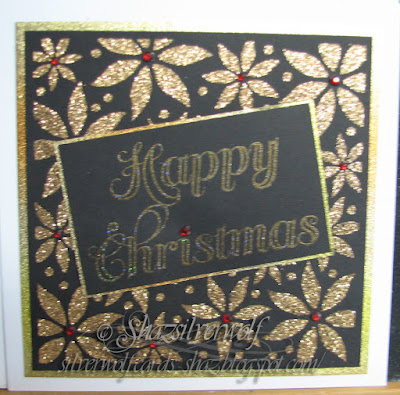 The stamp is by Honey Doo Crafts, called Happy Christmas Mini. I used a matching glitter embossing powder from WOW! Embossing powders on both cards. I also added acrylic gems to the centres of the flowers. The stamped sentiment is matted onto the same backing paper I used for the main image.
The image is set onto a 7" card base- although on measuring, I find it's the envelope that is 7", the card base is 6 3/4".
But even so, these are quick and easy cards,and could be made smaller just by using a smaller piece of cardstock below the stencil, and then a correspondingly smaller sentiment. In fact, I think I may go and give that a try!
By shazsilverwolf - June 11, 2017

Two super glittery cards for Sylvie's challenge this week. I love a bit of glitter on Christmas cards and these are really eye-catching.
Lorraine

Oh these are so beautiful, loving your colours and what a brilliant idea to put glitter into the stencil paste, love them and thanks for the birthday wishes, Kate x

Wow! These are absolutely gorgeous! I love the glitter mixed in the paste, it looks so amazing and festive. Great job!

Two super cards Shaz and what a brilliant way to use up glitter supplies...thanks for the idea :) Carol x

these are two beauties - I love the glitteriness... beautiful stencilling! Hugs rachel x

If you can't use glitter at Christmas when can you? Two great cards Shaz. Christine x

Wow I love that stencil....I just love the glitter they are stunning cards,sorry to be so late in the day commenting we have spent the day on the road travelling down to Hay on Wye for a few days away,fingers crossed for dry weather....xxx

That's a great idea to mix glitter into plain paste. . These cards are lovely and sparkly hugs Mrs A.