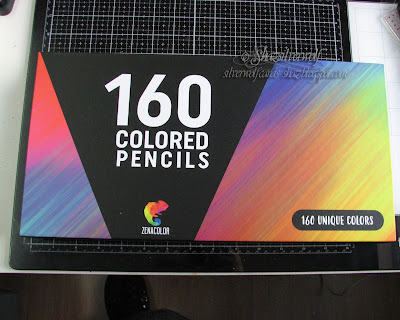 Okay then, I bought this set a few weeks ago. I do have a full set of Prismacolor, but as I tend to do my colouring books downstairs, they tend to be kept downstairs. If I want to do any colouring in my craft room, this means I'm frequently taking them up and downstairs. So I wanted a second set, but wasn't intending on paying a huge price for them.

So basically the Zenacolor gave me the most pencils for the best price. The Amazon reviews were quite acceptable, I thought, with the majority (91%) giving 4 & 5 stars. 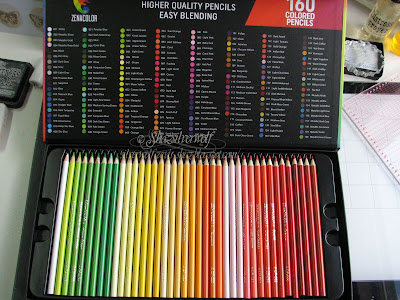 The box opened up, and as you can see, there is a colour chart on the lid.
This is the top layer of pencils.


The lid of the box also has magnets on the flap, so the lid stays closed, which is a nice touch. 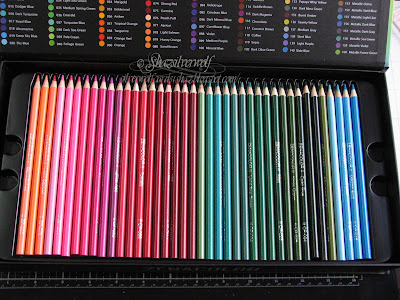 The second layer. You can see the finger grips at either end. The plastic layers are not incredibly flimsy, but as they are quite long, care does need to be taken in lifting them out, and keeping them level. One or two Amazon reviews mention them being damaged in the corners on arrival, but mine were perfect. 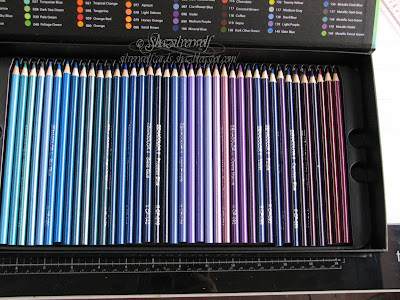 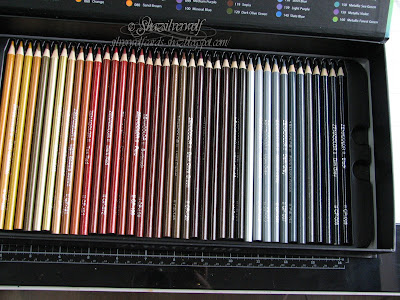 and the fourth and final one. 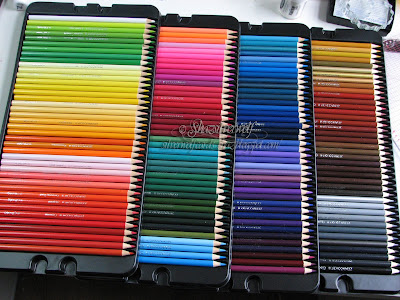 All four layers here, so you can see the colour range.  And of course you can rearrange them in a flow that suits you best.

But of course, how they perform is the important part, so as I wanted to add a bit of colour to some images I'd just stamped, which is what I really want them for, I gave them a trial. 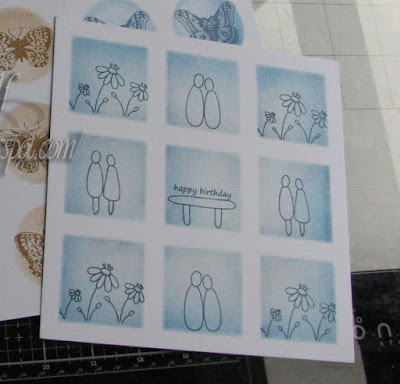 This is the piece I wanted to add a little colour to. It's stamped in Archival Cobalt, and the squares were coloured with Distress Inks.
I intended to add some colour to the flowers, and some shading to the Pebble People.
I have to say here that I am no colouring expert, and my biggest fault is being a little too heavy handed! 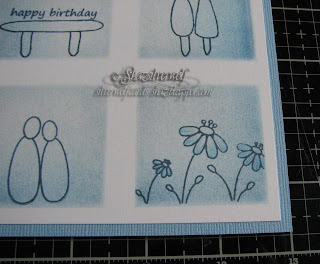 I began by adding some of a mid blue to the petals, and to be honest, I could have stopped at that.The pencils went on over the ink with no difficulty.

But I added some of a slightly darker blue over that. 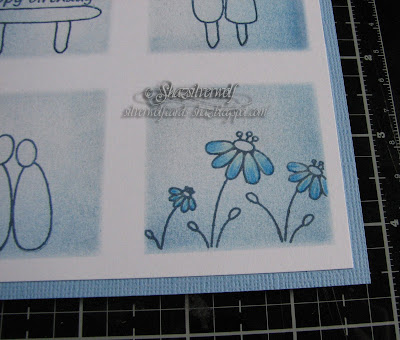 I forget to soften my strokes as I get further along! That makes blending so much easier. I think I may also have jumped shades a bit too far. 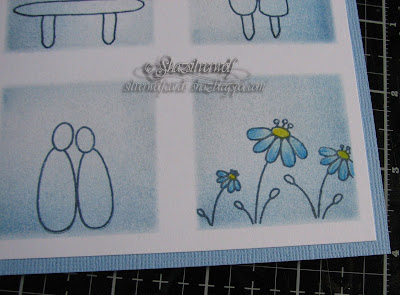 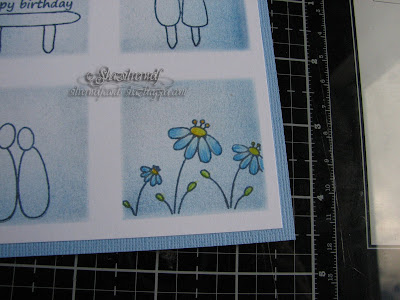 Added a little of a more orange yellow to the edges, and to the stamens. 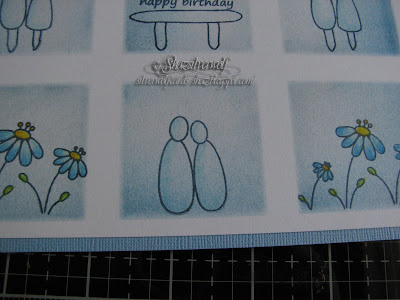 I went back to the very pale blue to add some shading on the people, and using a lighter hand made a big difference. 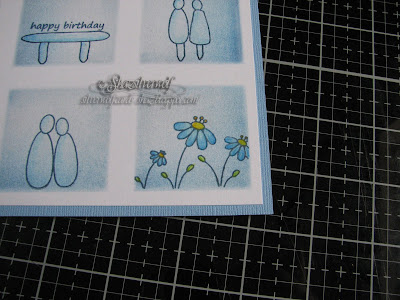 If I'd been a little more gentle with my colouring, the blend on the petals would have been much better.I did go back over them with the palest blue, which helped to smooth things out a little.
Also, the green for the leaves covered the blue with no change of colour. 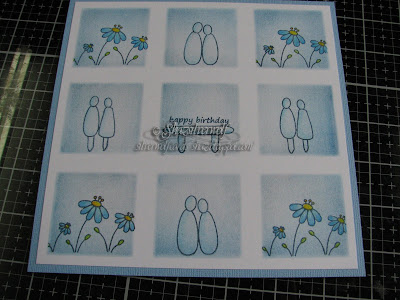 And this is the finished piece. I definitely went too dark with the petals, but thats a lesson learnt for me.

As far as the pencils go, I have no complaints. They are not quite as soft as my Prismas, but at the price I think they will be perfectly acceptable for my purposes.They seem to blend just fine, so my next trial will be on plain white cardstock, rather than over ink, so will perhaps be more fair to them.

I have only used these pencils to blend with themselves, I haven't yet tried my Prisma blending pencil with them, as I wanted this to be a test for these pencils alone.
By shazsilverwolf - May 04, 2019

Great review Shaz,I've not seen these pencils before but they're a good price. I have a few different ranges and Prismacolour pencils too, but although they are beautiful to work with, they break so easily when I'm sharpening them,that's so disappointing as they are so expensive, I don't think I will be replacing them. It will be good to hear how your pencils do on other papers, thanks, Kate x x
,

These look to be a good alternative to Prismas. Lovely job on the testing pics. Didn't see any heavy hand here but sure that's an 'in person' thing. Thanks for sharing the review! Hugs & Creative Blessings. Kel

Nice review! It’s always good to know that the budget pencils will really do the job!

Very interesting, Shaz. I’ve 150 Prismas and live on single level small home so no need but interesting all the same. My Prismas are in kid with magnetic close and are similar in layout except the black plastic pieces are half the length of those and so two side by side. I think, my sister has a set and use hers too and maybe getting mixed up. Hugs Shaz in Oz.x

Hunh, I have not seen that particular set offered. the cheaper ones I bought to play with are called Arteza? (found them on amazon also) anyways, it looks like you got a nice range of colors for the set which is always my thing. I was very much a 64 box of crayons kid :)