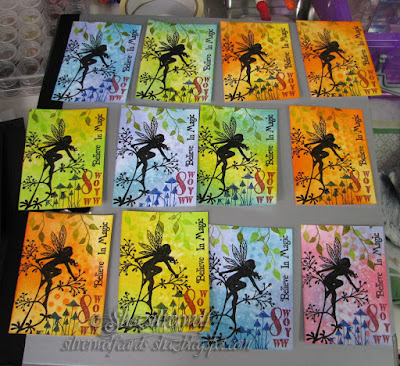 This is a selection of the ATC's I made to share, showing the various colour blends.
They were all done with Distress Inks, and assorted Versafine colours for the stamping itself. 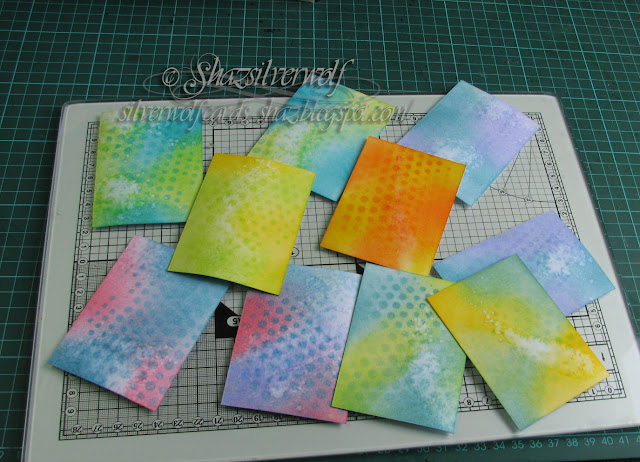 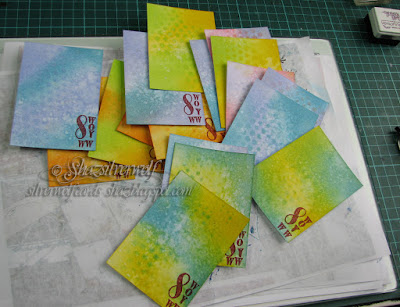 After the ink blending, I used a dots stencil to sponge through a little of the darkest colour through in patches, then flicked water over them and blotted it with some kitchen roll.


The WOYWW was done with some alpha stamps, little wooden peg ones from Hampton Arts I picked up for a quid somewhere- either going to be Hobbycrafts the store, or the Hobbycrafts show at the NEC. The 8 comes from a Tim Holtz alpha & numbers set called Mini Worn Text. They were stamped in Versafine Crimson Red. 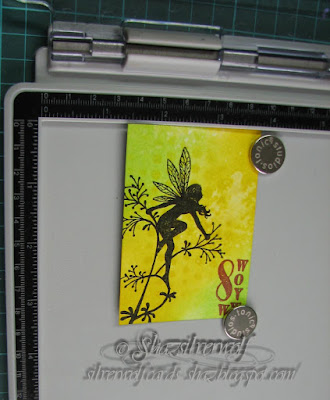 I also made use of my Stamping Platform to get the fairy, from Lavinia Stamps, in the same place on each card, which was slightly more critical than normal, in order not to end up mixing with the WOYWW8 stamped in the bottom corner. 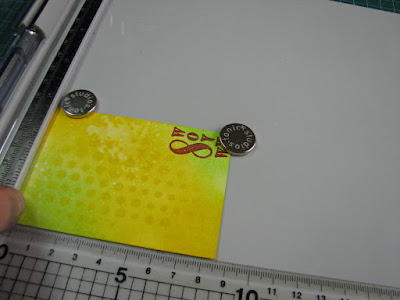 She was stamped in Versafine Onyx Black, and heat embossed with clear powder.To get her away from the numbers, and give me room to stamp 'Believe in Magic' on the right, I needed her to be stamped slightly off the page. 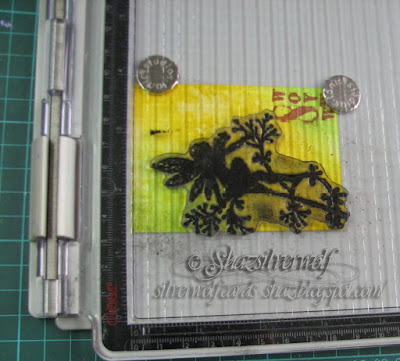 Bit of improvisation here- I used a clear ruler lay along the left hand edge of the platform- which is the 'closed' side- butted my ATC up to it, added the magnets to hold the ATC down, then removed the ruler & stamped. A cheap & easy way to give yourself a bit more freedom in positioning. 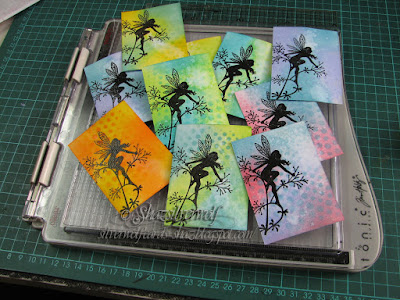 I know Versafine isn't specifically meant for heat embossing, but I find that dependant on the cardstock used, and sometimes how quickly you can do it, it is possible. The cardstock for these ATC's, by the way, are Clarity ready cut ATC's.

These pics seem out of order, but I made another 10 on top of my original batch of 20 to have some extras for sharing, and clearly didn't do everything in quite the same order! 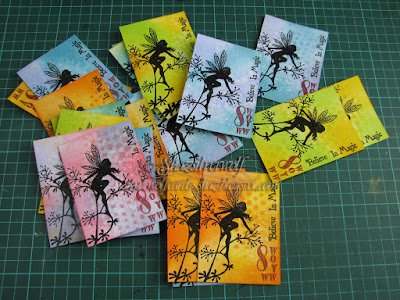 Next bit to be added- and again I used the Stamp Positioner so I didn't get it wonky- was the 'Believe in Magic'. This comes from a Lavinia Stamps  one that reads' Those who don't believe in Magic will never find it', but I didn't want the whole thing, and the positioning of the words on the original didn't work for me either, so out came the scissors. 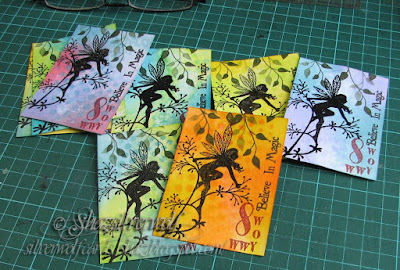 I snipped out Believe,which was on one line, and In Magic, which were part of the next line, and arranged them alongside each other. I used Onyx Black again to stamp the words.

The hanging leaves along the top are stamped in Olympia Green Versafine, first & second generation stamping. 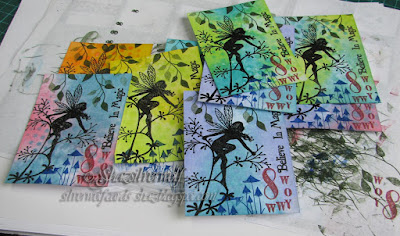 Final stamping was some Tiny Mushrooms, Lavinia stamps, in Versafine Majestic Blue along the bottom.

Now to give them some dimension, and I used Liquid Pearls Onyx on a few of the 'buds' at the ends of the flower the fairy is resting on. On others I used Stickles Black Diamond.

Just about visible here is Stickles Diamond used on the Fairys wings, and then just a few dots to her right for a bit more sparkle. Then I decided the mushrooms needed a bit of bling, so added some Stickles Midnight Blue to the tops. 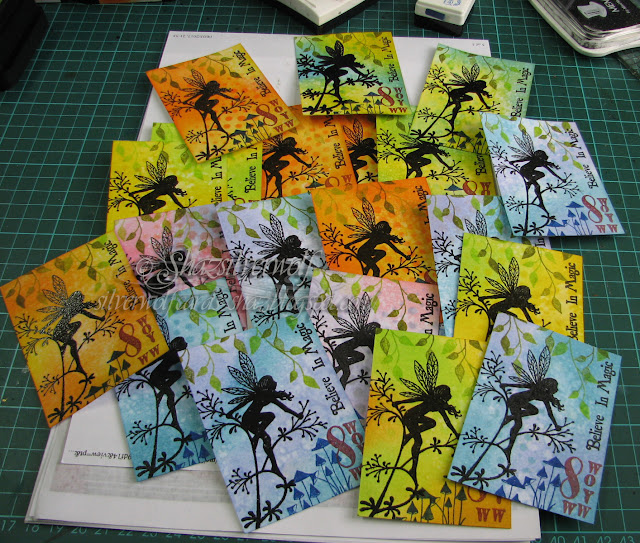 The backs were stamped finally with an ATC stamp bought from Stamp & Go, in Versafine Sepia. 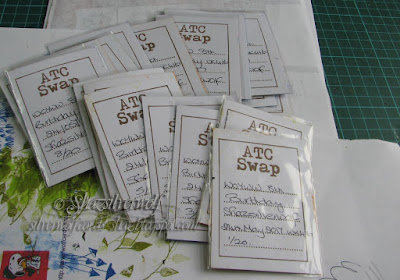 Oh goodness, so much work arms planning that went into these tiny works of art. Definitely pieces to be treasured, they are fabulous x

what beautiful atcs! I love the different colours.

Thanks for sharing the process Shaz. The ATCs are all beautiful. I love how different they look, simply by changing the background colours. I love Versafine inks and regularly use them for heat embossing with clear powder.

Fabulous cards Shaz and such lovely images and colours, thanks for taking the time to show us your process, Kate x

Great ATC and such a great use of your fab new stamping platform! Crossing my fingers that I can get my hands on one soon!

These are lovely Shaz - you've made so many! A great technique to use when you need lots of them quickly, but they're still unique in their own right.

Great to see how you did gem Shaz thanks for deets.
BTW Vesrsafine is pigment ink and meant for embossing. Or mine are, it says that on twisting where I buy them. Don't have the colours you have in maroon. Need some more. They're on my watch list. Have black blue and purple. One day I'll get some more. It's my go to ink.
Shaz.x

A beautiful array of gorgeous colour blends Shaz. You have created some lovely stamped scenes here too, love them.
Lorraine

I can't get over you being organised and making Christmas cards!
I'm a bit of a last minute maker.
Have a super weekend,
Katie xx44