Dried up Cosmic Shimmer Gilding Wax- A fix that works! 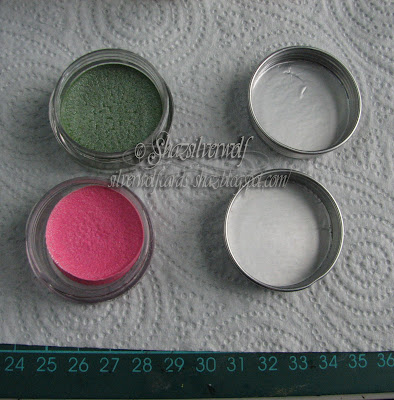 Right, so this problem appeared a few days ago. I was gifted a whole bunch of these pots, about a year ago, and hadn't as yet used them. I tried to use one last weekend, only to discover it was totally hard inside the pot. And I mean hard- almost like a stone! No amount of rubbing the surface, or even trying to scrape it yielded anything at all. So, I made use of Google to see if there was a way of retrieving them, as of the 15 or so pots I had, almost every single one was solid.
As you can see from these two pictures, the wax has gone totally solid in the pots. The pink one has even shrunk away from the sides of the pot. 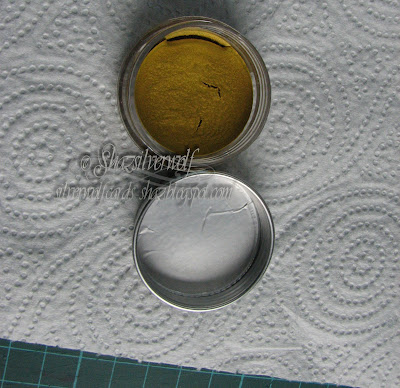 What I did discover was that apparently this issue of them hardening in the pots had appeared a while after the product had been available. The info I found said that Creative Expressions, who make this product, had released a Blending Solution to help. As far as I knew, I didn't have any- but later discovered I did- but in the info I found, one person suggested using turpentine to soften it, as it was wax based. I didn't like that idea at all, as for starters, I hate the smell, and I also thought that the turps smell would linger in the product, especially as they are in closed jars. 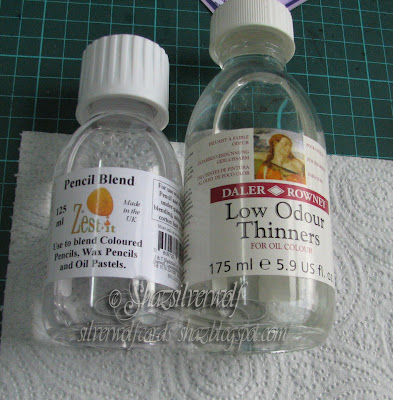 After giving it a little thought, I wondered if other products you can buy- Gamsol/Low Odour Thinners( Daler-Rowney) or Zest it would do the job, as they are meant for blending wax pencils?

I actually first did this experiment with a pot of blue, which I didn't photograph beforehand, but it was exactly the same.
The first product I tried was the Daler Rowney Low Odour Thinners, and I have to say, I really can't smell anything from it at all. I made a few grooves in the top of each pot, and added 1millilitre to the green one, which was how much I ended up using in the blue one.
I put the lid back on, and left it to soak in. 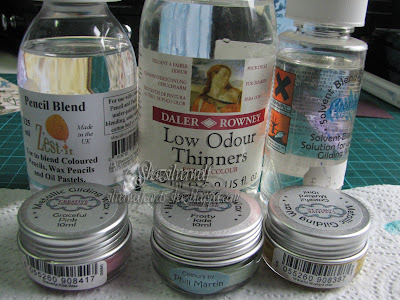 I gave the pink one the same amount of Zest-It, and by then I'd discovered I also had the Creative Expressions Blending Solution, I must have received that along with the waxes, so I used that one with the gold pot.

I put the lids on them all, and left them overnight.
By the way, if you do have a problem with any chemical smell, as the name suggests, the Zest it has a Citrus smell. 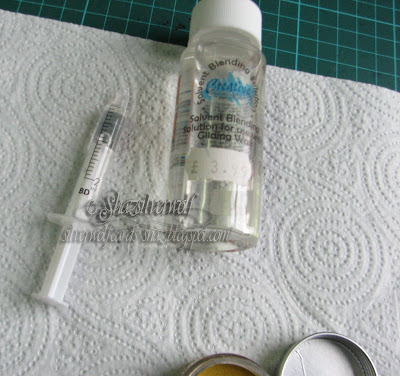 I have some small syringes I use for silicone glue, so that's how I knew how much I was adding. I'd guess it amounts to about 10 drops. 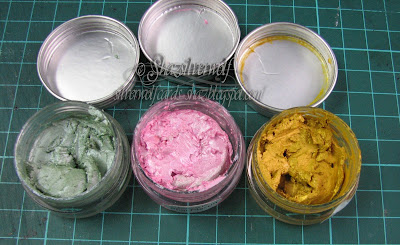 Next day, I took off the lids, and the wax had softened enough I was able to smoosh it round with a palette knife. Yesterday, I'd struggled to score lines in them with a scalpel! 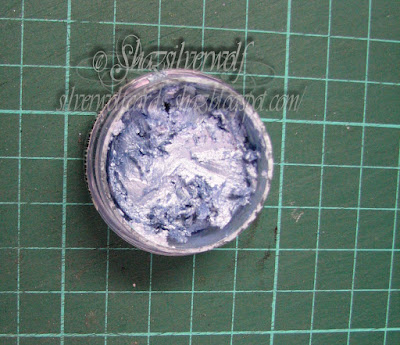 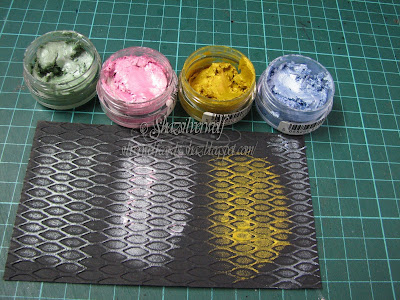 This was the blue after I'd softened it.

I've rubbed some onto some textured black card, so you can see they are now useable.


I can't honestly say any one of the solutions worked better than another,they all did the job perfectly well.


So, if you have a bottle of Gamsol/ Low Odour Thinners , or they can be easily found in a local art supply store, then I'd go with that for ease of availability. Zest-It is available through Amazon, certainly, and the Blending Solution is available from a number of craft stores, if you run a Google search for it. 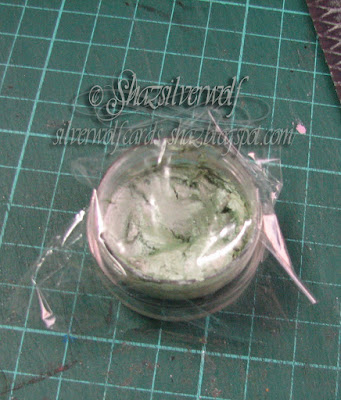 
What I've done is add a square of cling film over the top of the pot before putting the lid on, and I'll report back in a few weeks if the newly reconstituted wax stays soft. 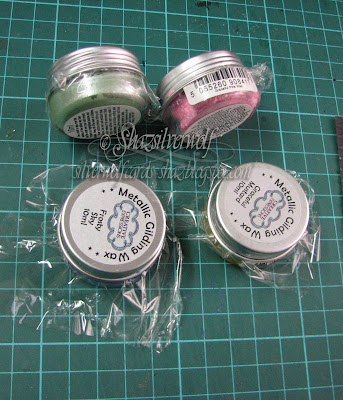 So, I hope this is helpful- these pots of wax are not cheap, and certainly I'd not be happy about having to just toss them out, especially if I'd gone out and bought them.

One thing I would suggest is to carefully assess just how dried out your pots are before deciding how much solution to add, whichever one you choose.  Like I said, mine were rock solid, and I tried it with one pot first, figuring as it was unusable anyway, I had nothing to lose.
I'd say try a few drops- maybe 5- first off, scoring lines in the top of the wax if you can. Leave overnight, and if need be you can always repeat the process.
The info I found about the CS Blending Solution says you can add a few drops to a little wax, and mix to make a paint, so it would be possible to thin them down too much to use as a gilding wax. You can always add more if needed, but you're not going to be able to take it away, unless you left it open to dry out again!
By shazsilverwolf - April 05, 2018

Hi Shaz, thanks for this information. As we no longer have a handy art shop, I'll be doing an online search. I have asthma so the low odour thinners or the Zest It would probably be best. Hugs, xx

I haven't even used gilding wax but found this fascinating. So thank you, Madam Scientist!

Hi Shaz, great informative post, thank you. I had some of the gilding wax yonks ago and the same thing happened, so I binned them all, meaning that I've never bought any of the was again, but now I know what to do for the future if I fancy buying more, thanks again, Kate x

I bought Inka Golld gilding wax several yrs ago now and it has done the same thing so it isin't just a brand thing. Thanks for the remedies you have suggested. Hugs Mrs A.

Thanks Shaz. I have had this problem with Inka-gold and Creative Expressions gilding wax, and vowed not to buy again, it's too much trouble trying to soften them. I wish pebeo would do theirs in smaller pots, the 30ml pots are far to expensive for my occasional use.

I already threw out several of mine but will try it on some of the others as I do have the blending solution.

Food-grade glycerin will work too, although I have no idea if it works comparable to your helpers. This problem is with Nuevo Mousse and Inka Gold and DecoArt Metallic Lustre as well. xoxo

This is really helpful - I too went to use a gold gilding wax I'd been given but never used and it was rock hard. I have some zest it so will give that a try - thank you :)

Great idea, Shaz! I have had trouble with those dried up waxes as well. I think I have some of the zest solution lying around so will try to save them. I used to put the pots in hot water to soften them, but it didn't really make much difference.

Many thanks for this help . 2 out of 3 of mine have hardened and I was also under the impression I would have to throw the: away but thanks to you I will now be able to salvage them . Shame Cosmic shimmer don’t supply something along these lines or at least information about the issue . Thanks again for you working it out and saving us all a lot of wastage .

A really informative blog. I have a couple of Cosmic Shimmer Building Waxes that have dried up too. I had some low-odour turps which has softened them really well so they are now all usable again.

Brilliant piece of info ty.Now all ive gotta do is find out if theres something i can do with Creative Expressions glitter kiss thats now dried into a pretty rock!

Thanks for this information.I bought some of the gilding waxes a few months ago and had never used them, tonight I found one of them is drying out, more like a jelly than a cream and doesn't go on smoothly, I have some low odour thinners and may have some gamsol so will try a drop or two of that, I also have some Inka golds that are drying out too so will try it on them as well. Thank you for sharing your expertise

Thank you for sharing your experience. Much appreciated

Hi Shaz, I have quite a few gilding waxes not cosmic shimmer but larger pot, and they have all gone hard so I will give this a try.craftydot.

Very helpful, Shaz. Probably any oil-based thinner would do. I wonder if WD40 would work? That stuff is amazing! What about alcohol ink blender or rubbing alcohol? I've got some Treasure Gold gilding waxes and so far they seem to be OK - I use the gold one mostly. I've got a little palette somewhere of different coloured ones. Not sure what make they are, and I haven't used them for so long that they are probably dried up. I'll have to look for them.

And of course, by that I mean a bit of enabling to share on this weeks desk sharing link up, hosted as always by our beloved Julia, over at ... 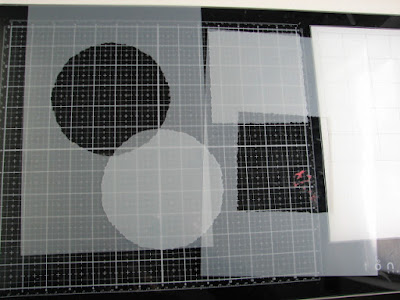