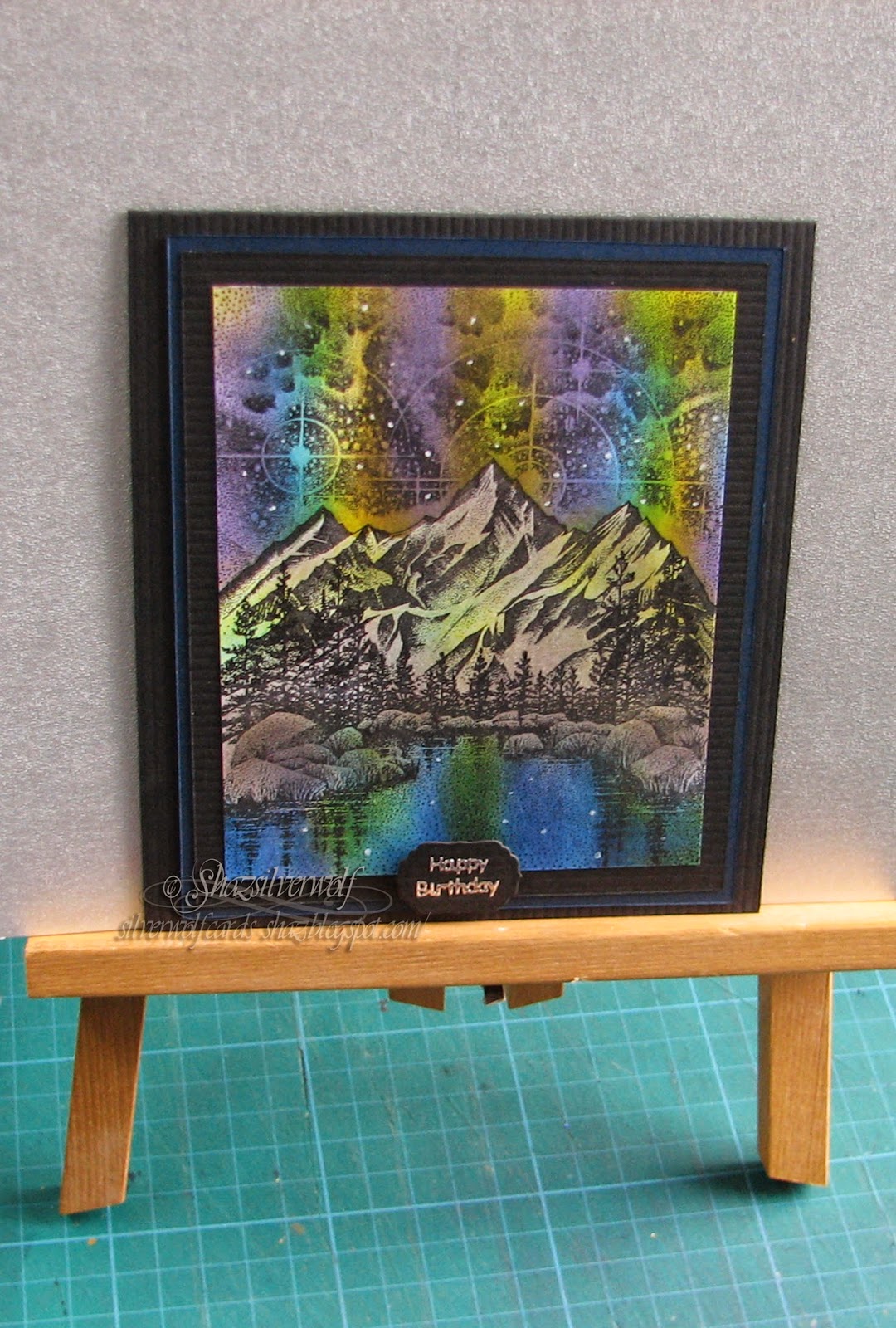 As the previous project came out so well, I was intrigued to see if I could build up a whole scene with a group of stamps and still using the Northern Lights technique for the sky. I figured if I used some masking, it should work ok. I have to admit, I'm loving this method- even I think this sky is stunning! 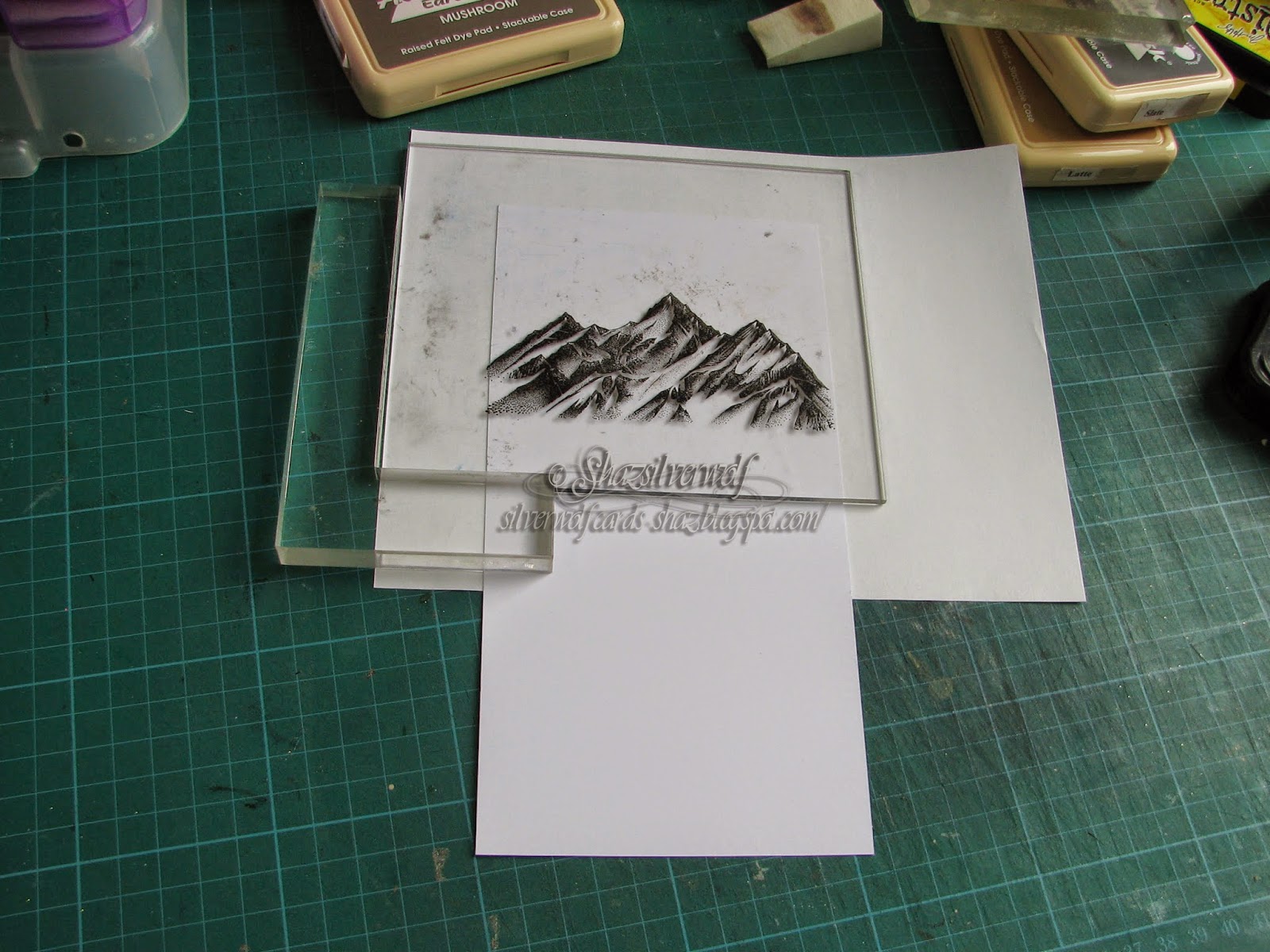 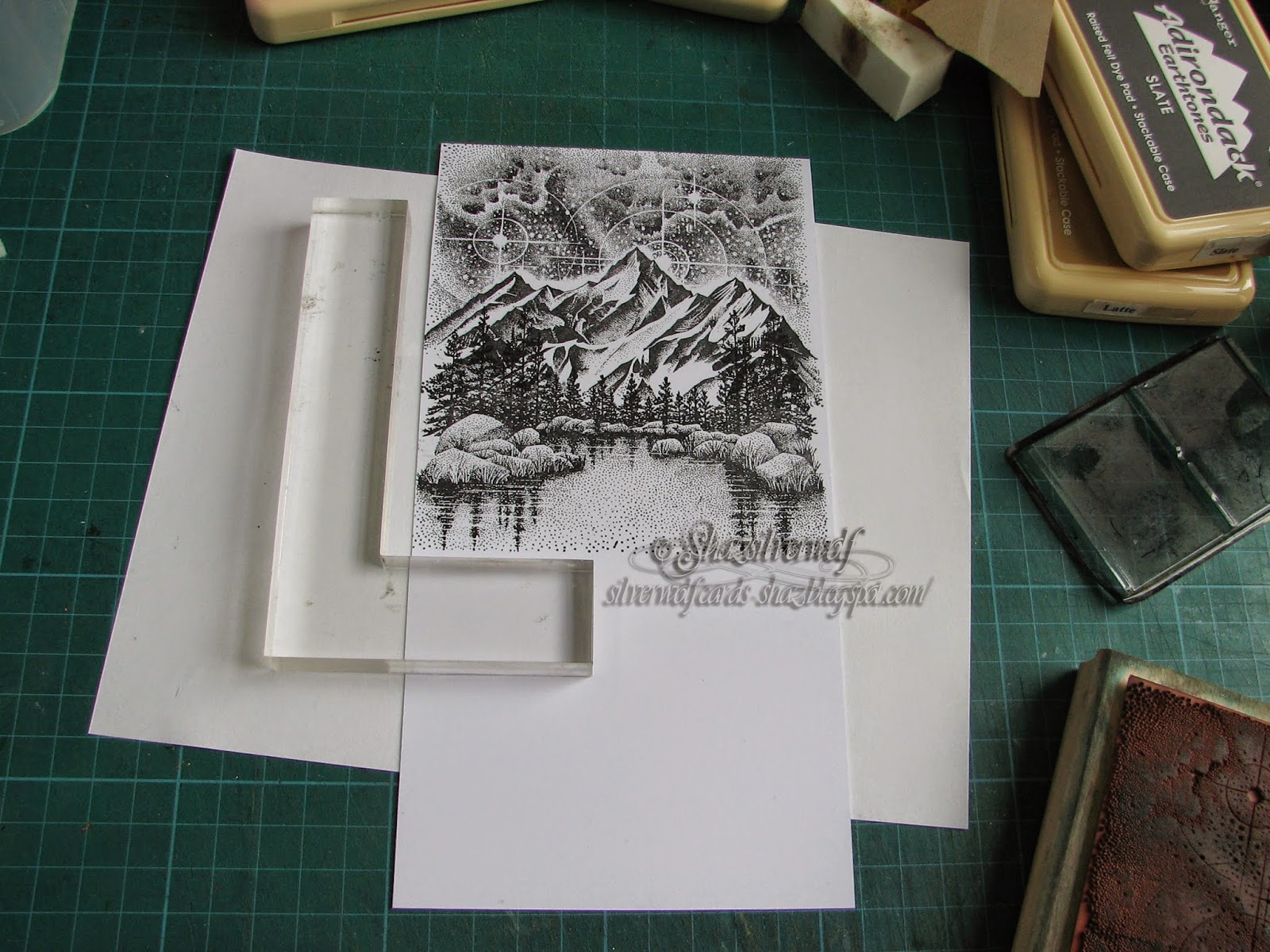 The stamp positioner came out for this- I have a phobia about not matching the stamps up quite right. I used Versafine on the positioner plate, but Staz-on for the actual stamping. I used to stamp onto the plate with Staz-on, then discovered it was that that turned my plate all cloudy.  Having stamped the mountains in place, I placed Lakeside Cove below them then masked the mountains to stamp Star Birth over the top.This was the completed scene, before any sponging. 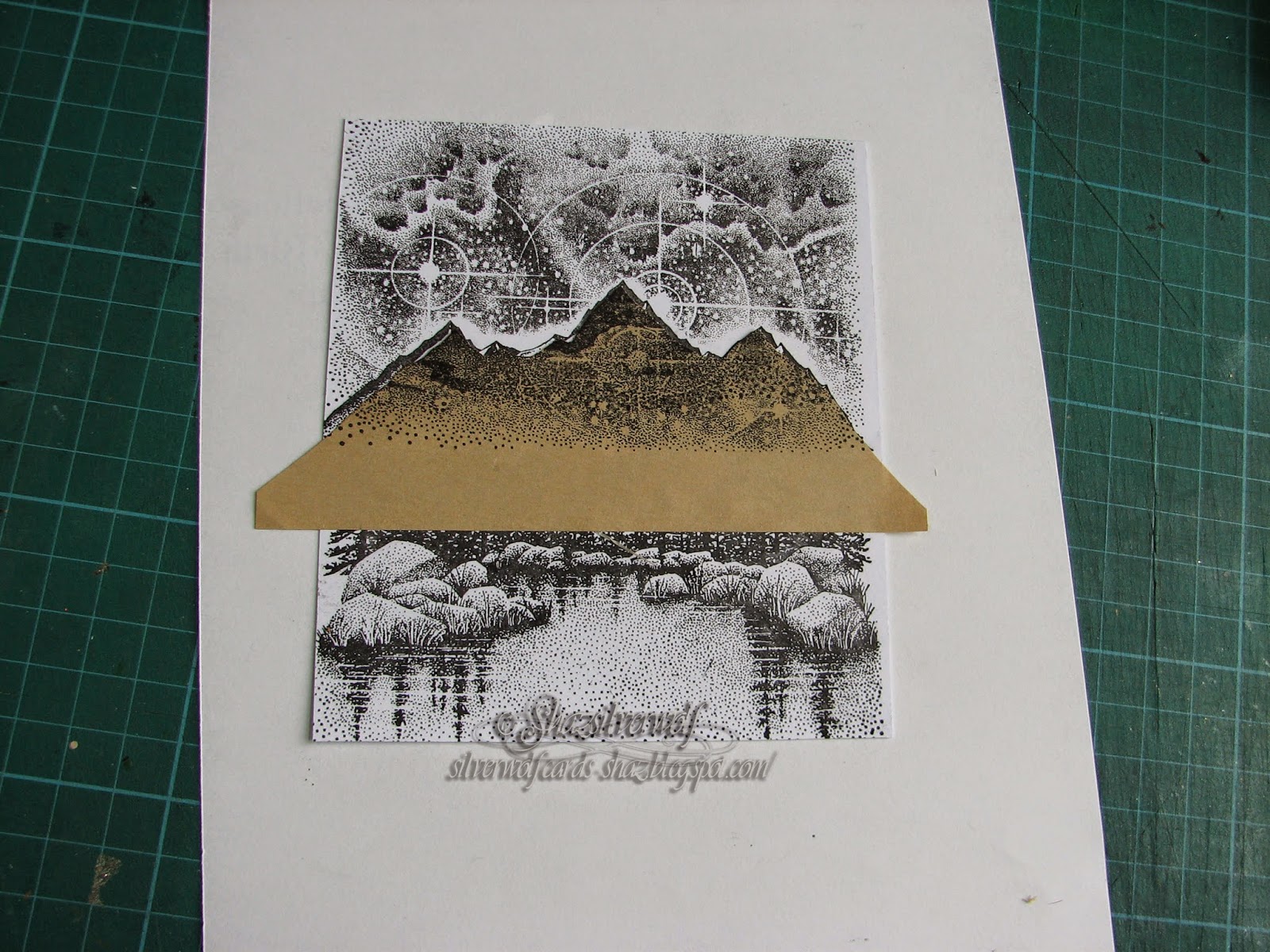 I put the mask back in place to begin the sponging- I wanted the colour to reflect in the water, but not be visible through the  mountains.

I started with Mustard Seed again, but this time I was a little more free-form in how I added it, not just in straight lines. 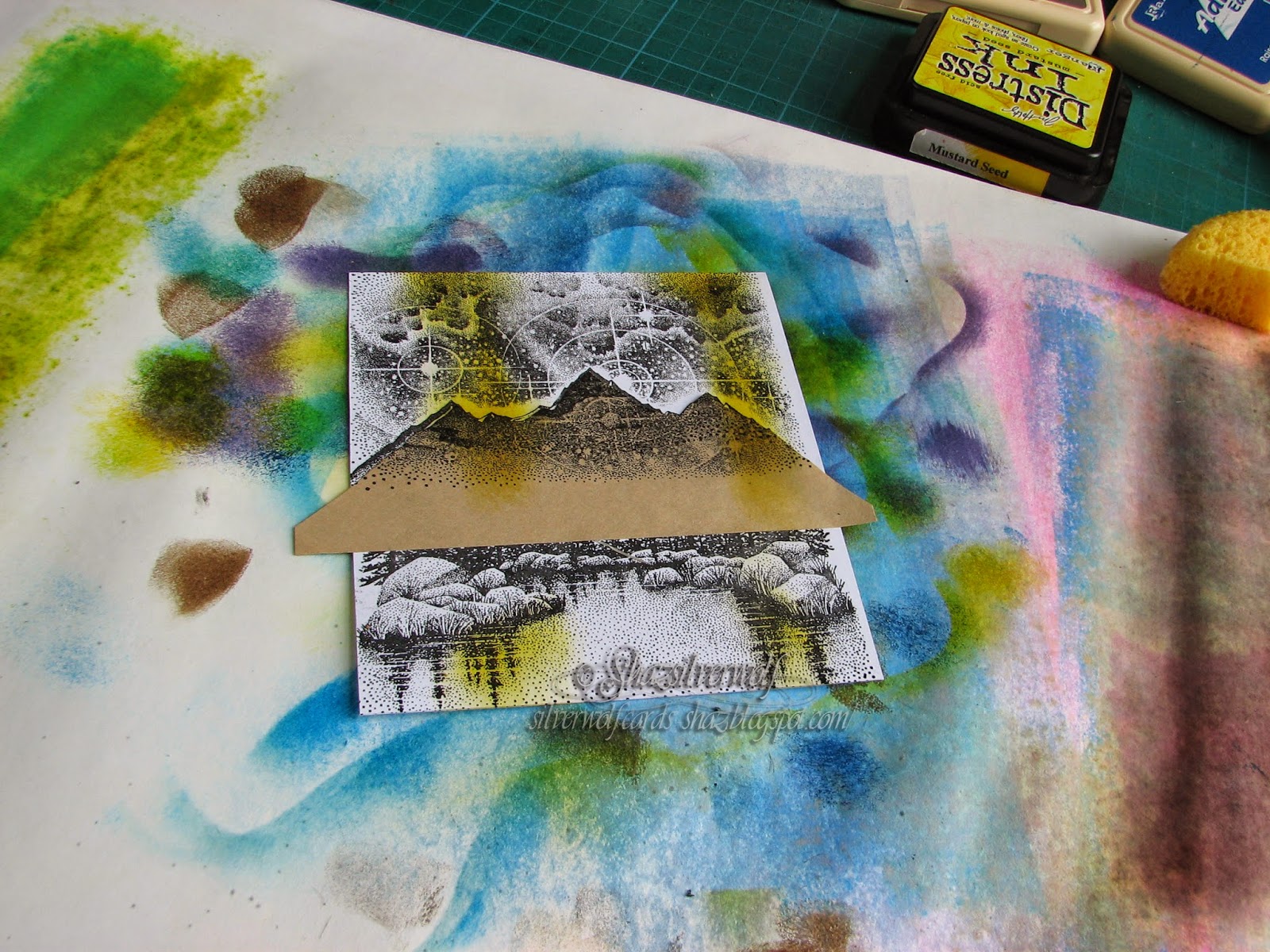 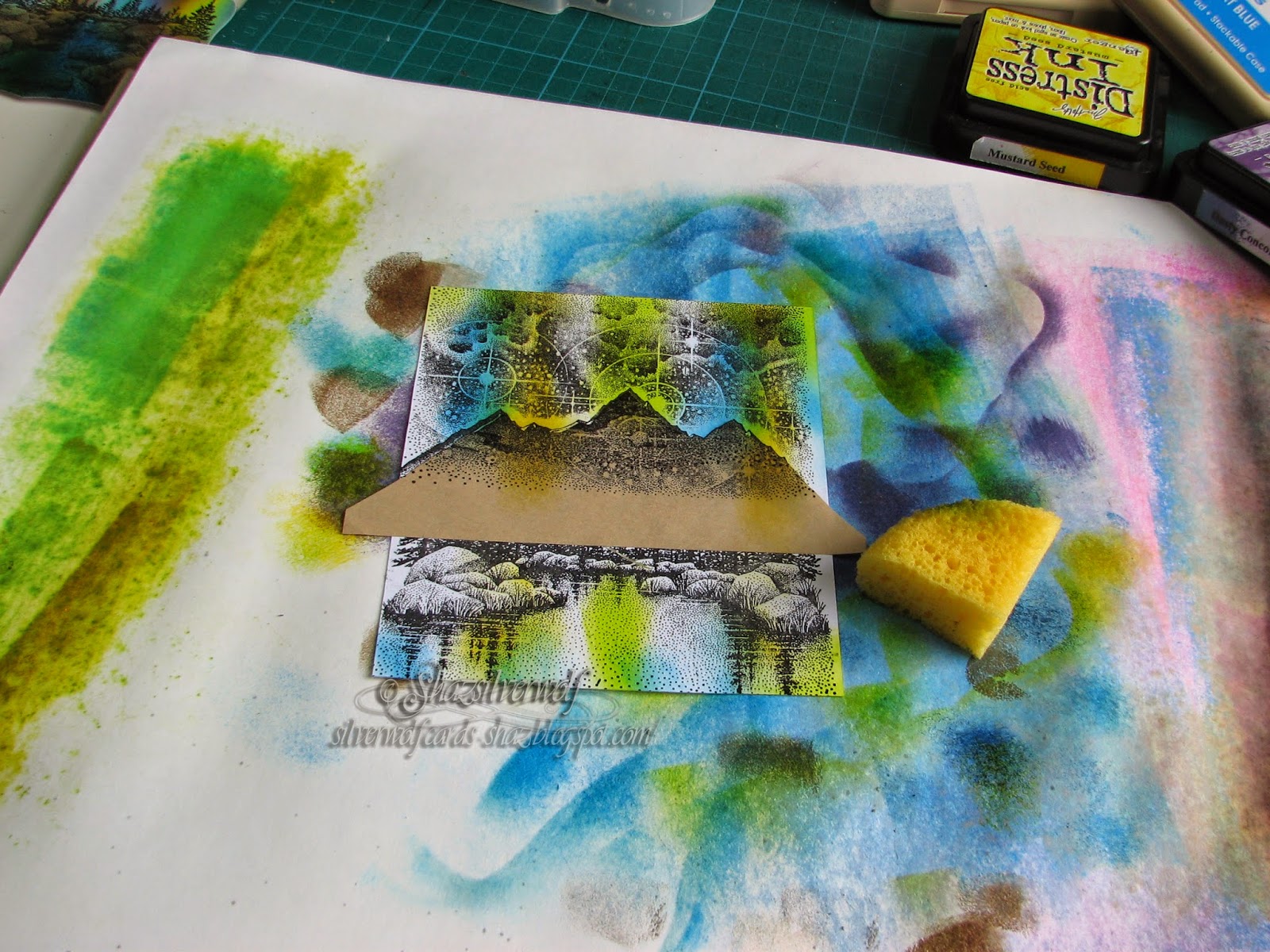 I sponged the sky, then added some streaks to the water area, with a few dabs onto the rocks. 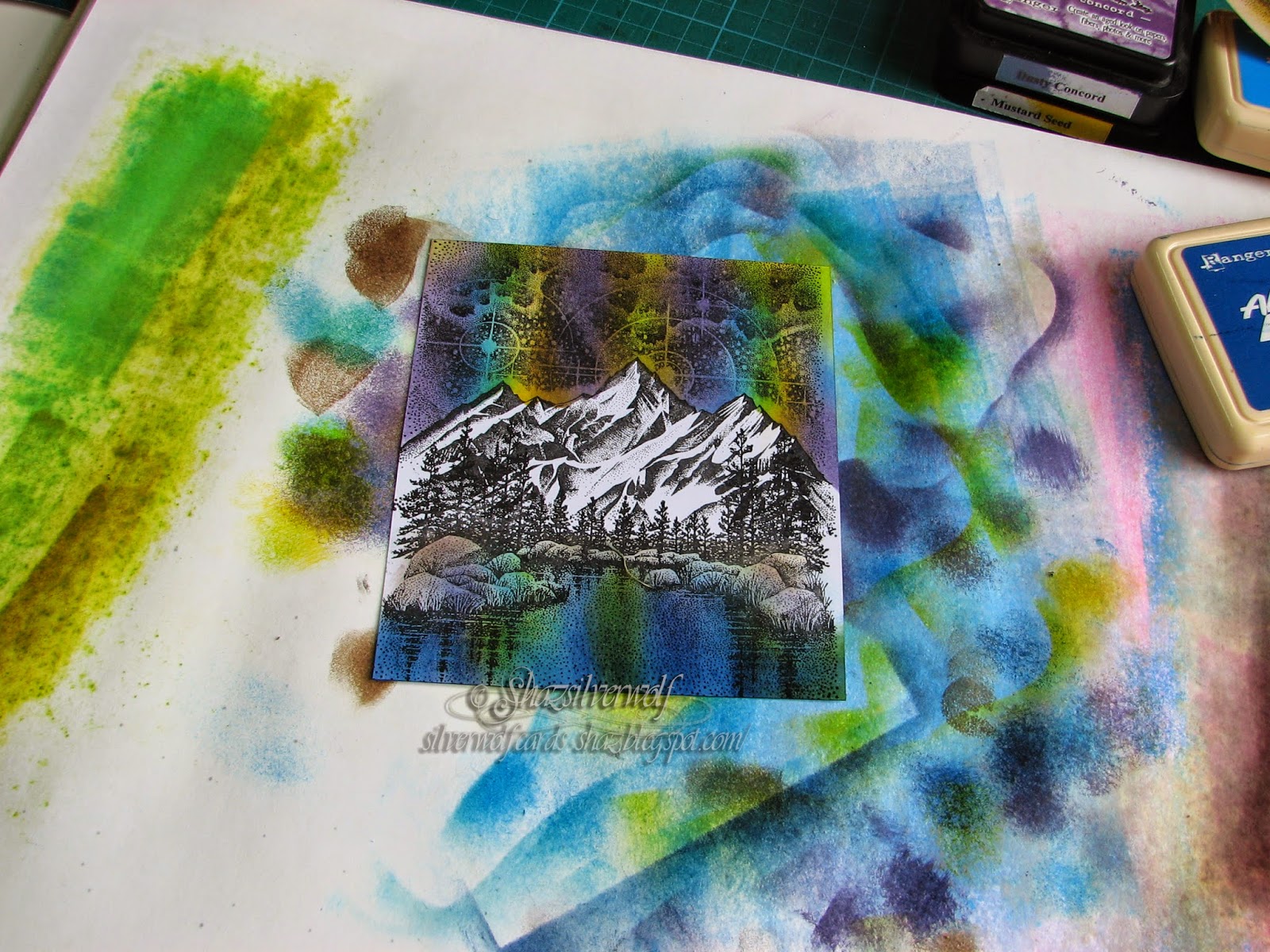 
Finally some Dusty Concord, then the mask was removed from the mountains. 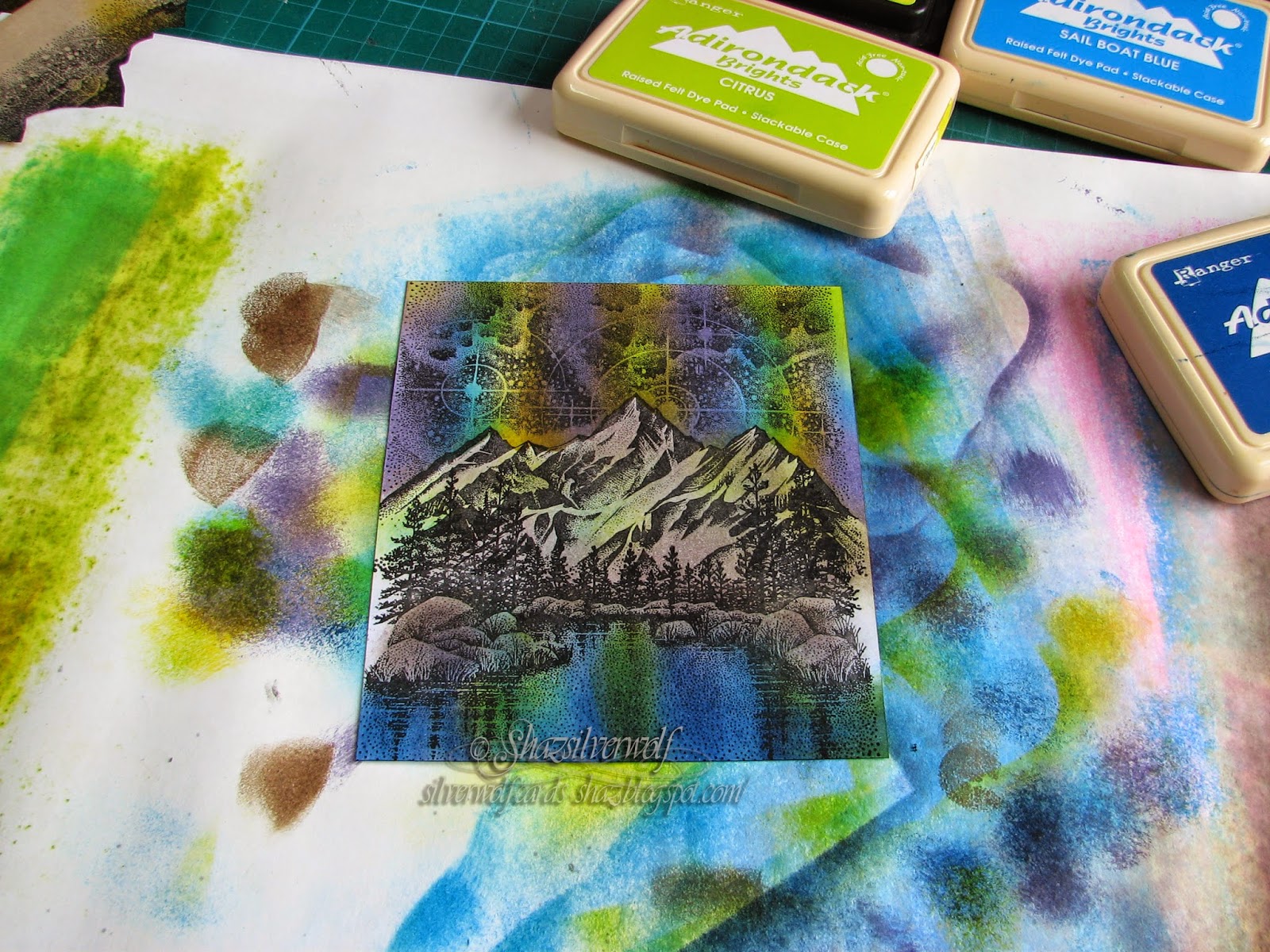 Latte and Slate were added to the rocks.

To colour the mountains, I dabbed in some Citrus and Mustard Seed lightly, then added Slate over the top, with finally a bit of Latte. A few stars were highlighted with a white gel pen.

I trimmed the edges of the image down, to remove the excess card, matted it onto black, then dark blue card.
I'm also entering this into the Craft a Scene Challenge for April, which is a Mountains and Hills theme. 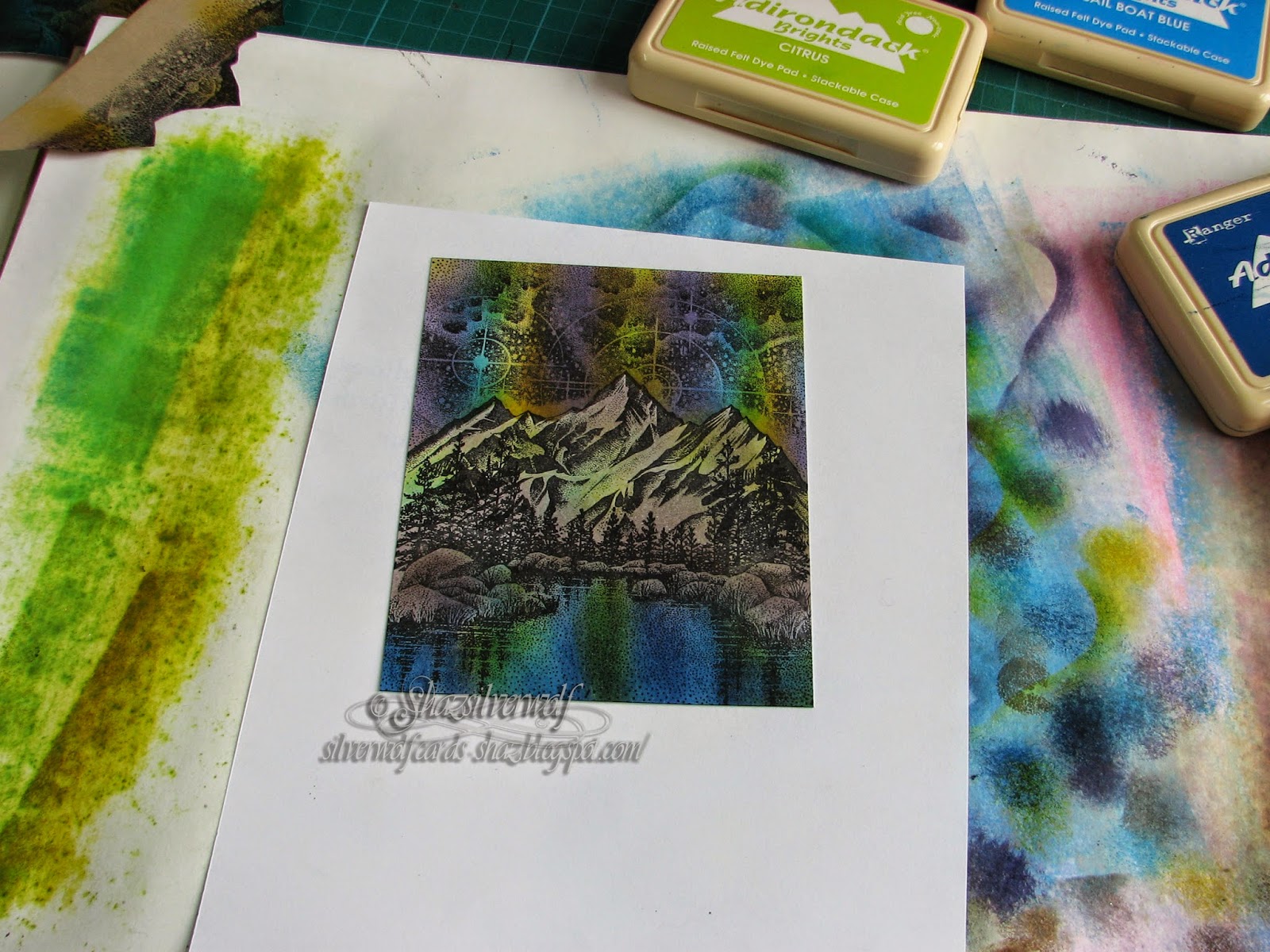 A gorgeous scene Shaz, I love the Northern Lights and the way you have them reflected on the mountains. Thanks for joining us at Craft A Scene this month.

Wow, I think this is even better than the last one :)

Beautifully done, and a great tutorial.

Absolutely gorgeous, Shaz! Just off to read your post on the Northern Lights technique as this is a new one on me. I love how you masked off the mountains and got the subtle reflection in the water. Amazing!

Thanks for the great tip about using Versafine on the stamp-lining-up thingy - I've just got to grips with mine and finally worked out how to use it properly!! I don't want it to go cloudy from using the wrong stuff on it, so thanks for the heads-up.

you are having fun Shaz.. just checked out post below too.. you must be addicted to Pinterest too.. love it .. so many ideas ... only became addicted a few months back.. now go there for all ideas now.. but not always easy to find original site to credit too. Shaz in Oz.x

That is amazing - I'm in awe. Thanks for popping by my blog (which must seem very tame :-) ) Anne x

Hello Shaz. I have taken a sneaky look back through the last three or four posts - fantastic effects you are getting - they look lovely. I trust you are REALLY pleased with your efforts! they are great. Well done.
Thanks for visiting earlier, and for your comments. Yes, life is a bit manic at the mo., but don't fret - I blob out in front of the DVDs of John Deed!!! I'm working my way through them - borrowed from a friend - and whilst watching I casually knit. Finishing off a jumper for John and little dolls.
John saw a physio in the hospital yesterday who gave him assisted breathing and then commented "Oh, they feel there isn't a break in the ribs? I know I can feel something moving here" So, we wait to see if he has another x-ray or what - but they have started him on some intravenous antibiotics to try and kill off a HUGE low lung infection....
Now, where's my purse - I'm off to the Works!!
Take care
Margaret #49

wonderful scene here - love how you've put this together - stunning work! The colours are so dramatic! Thanks for joining us at Craft a scene this month! Hugs Rachel x

I've been playing catch up on links through your posts, and was intrigued to see the northern lights technique so in evidence at the Crop recently!! What fabulous Stampscapes scenes you've created, you've really inspired me to get mine out again; not used them for ages!

Hi Shaz, I just found your blog through Margaret C, I love your Northern Lights scenes and you explain it all so well, thanks :-) x

That is very impressive! I've popped over from WOYWW - I'd better take a good look around your blog!