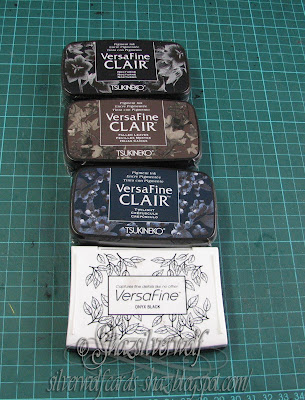 So, I'd seen these on Lavinia stamps website- I've not seen them anywhere else yet, and I do know that we in the UK have them before they've been released in the USA, which is a novelty. A discussion about them there a couple of weeks ago prompted me to get some, to see how different they were to our well known and much loved Versafine pads, as people were wondering if this means the original will be retired.

These were the three I chose, called Nocturne, which is Black, Fallen Leaves, which looked like a Dark Brown, but more on that later, and Twilight, which was a Dark Blue.
The pads are slightly smaller, and with a completely removable lid, not the hinged type. 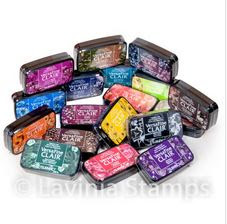 The full range is 24 colours, which is a lot more than are currently available in the original range. 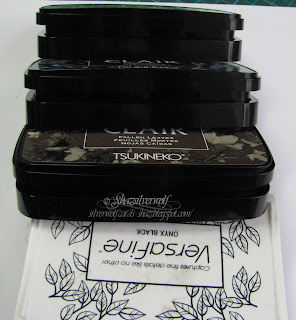 To return quickly to the lid, it fits over the pad, leaving a gap between the top & bottom of the pad, which I do think means extra care will need to be taken to ensure they are closed properly, as you won't be able to tell just by looking at it.


Looking at the info on the back of the pad, it reads exactly the same on both. 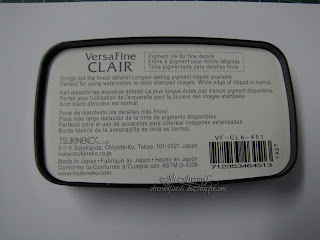 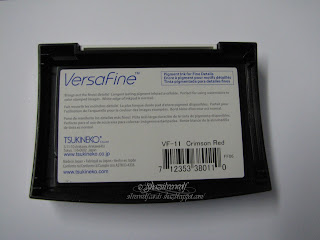 From that, it sounds as if there is no difference in the inks. One lady on SCS who phoned the manufacturer to ask about the difference was told the new one has a slightly longer drying time, but I didn't see any noticeable difference myself, but obviously cardstock can play a huge part in that aspect. 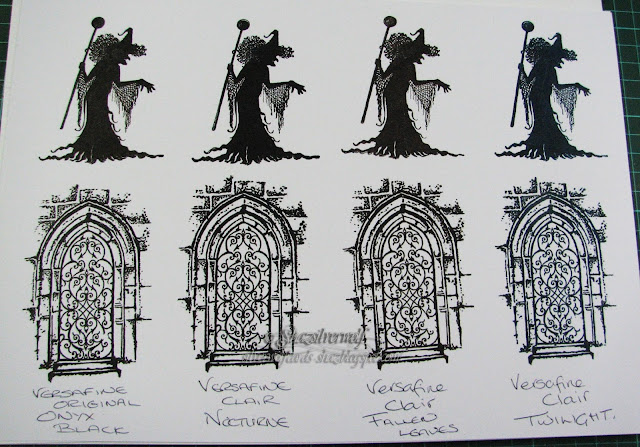 I used 2 Lavinia Stamps to test, the Witch for a solid image, and the window for one with some detail. I also reinked my Onyx Black to give a fairer comparison against a new inkpad. 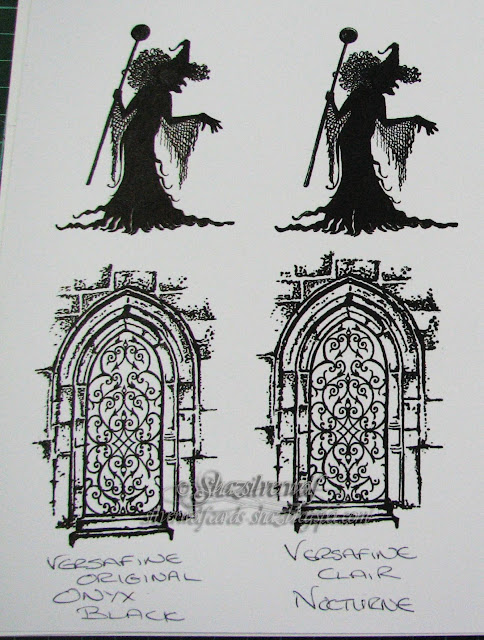 Comparing the Onyx Black and the Nocturne, I felt the new one was slightly thicker, and gave a really good coverage of the stamp. On this try out, I'd actually say the new one is slightly better, and although it seemed thicker, still gave a good result on the detail stamp too. But it definitely seems blacker, especially on the solid image.

Next onto the Fallen Leaves, which on the pad cover looks distinctly like a dark Brown.

But, as you can see, it doesn't look Dark Brown when stamped. It just looks like another Black to me. The image quality is just as good, it's just not the colour I expected from the lid.


Last one I chose was Twilight, a Dark Blue.
It is a dark Blue, and very similar to the lid colour.

When I opened it, the pad actually looked Purple,  but that vanished on inking the stamp. Again, a good solid image, and all the detail of  the window was picked up too.

The new & old pads side by side. You don't get the little fabric cover with the new ones. The pad itself seems to be the same construction as the original, nice and firm.

I found no difference in the ability to heat emboss with it, it works just as well as the original Onyx Black. 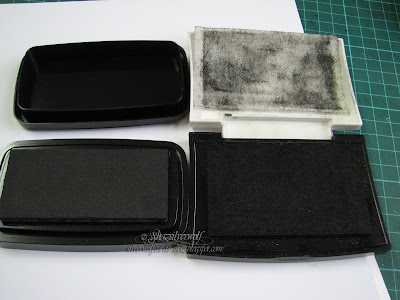 Summing up, my personal opinion is that these are just as good at least, and maybe slightly better than the originals. Just be wary of the lid colours- that brown needs some improvement in the lid colour, it's very misleading. And with plenty of new colours, I can see these becoming as firm a favourite as the originals.

Very useful to know. I love the deep navy blue as that colour isn't available in the current selection of Versafine (although I also like Majestic Blue). The brown is certainly misleading though.

I've not heard of these inks, but appreciate your trouble in getting hold of them and reviewing them!! they do look as if they stamp well.

Wishing you both a happy new year xx

Thanks for the review.

Mm Shaz, I’m in dark about these but like you ... I’d say Versafine are up there as my favourite stamp pads. So guess they need to iron out lid issues ie well fitting ones and also colours matches.
I dreamt about you last night, pray for you each night so guess it’s not usual so thought I should say hi and pray all is well with you. Thanks for your lovely card I was bit late in posting mine.
Every blessing Shaz for your dad Doug in the new year love and prayers,
Shaz in Oz,x

Mm not sure why dad hopped in there, meant Doug .. subconsciously am thinking of my dad! X

Versafine ink pads are my favorite and I'm excited that they're coming out with new colors. Thanks for your great review; it's very helpful. Happy New Year!

A great review thank you. How odd that that brown is black! Sending hugs x

Hi Shaz. Not heard of these new inks, but many thanks for the review. Happy New Year to you and Doug xx

I saw your post at SCS and meant to come over and look. I love my versafine and have all the colors in cubes. I am intrigued that the black is blacker! My large black pad is falling apart, so I would love to replace it with the new Clair, but who knows how long it will be till they come to the USA. I also think that the regular versafine colors look incredibly dark and almost black. At least the green! Thanks for sharing and enjoy your new inks!

ooh very cool comparisons :) I love seeing photos like this Shaz, they do not have these inks here yet (or they are not releasing them who knows) but, the idea of more colors is so cool. I love my Versafine pads. Thanks for sharing.

The black ink in a brown container may really be a manufacturing error. Did you talk to the company?

It was so great to find just the information I was looking for at the particular moment I needed it! I appreciated that you hit on every possible element for comparison (I would have done the same thing) and included a nice array of pictures. Perfect!
Thank you! SA