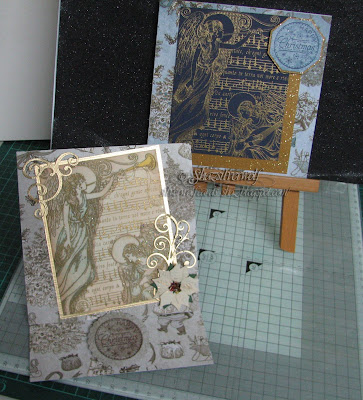 This fortnights challenge is chosen by Granmargaret, and calls for Angels or Fairies.
Two different cards, one square in blue, and one Easel fold in brown. The papers for both come from a pad I picked up in The Works last year,and is a slightly unusual format of 15cm x30cm. Which worked perfectly for the easel card!
The stamp is by Rubber Stampede, called Angel Chorus Collage. I doubt it's still available, as I can remember this was one of the first Christmas stamps I bought, and that would be close on 15 years ago.

OK, I'm officially shocked! Just went off to see if it was available, and turns out it is! A UK online retailer called Carysma has it, along with a whole load of other fabulous Rubber Stampede stamps! 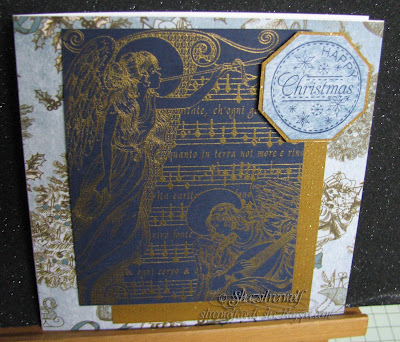 The circular Happy Christmas stamp is by Circa Design, and comes as a set of three called Christmas Circles. The other two are Seasons Greetings and Happy New year.


So to start with the Blue one, I took a 6" square card base and covered with the paper. The Angel stamp was stamped onto a dark blue cardstock with gold encore Pigment ink, and heat embossed in gold. I trimmed it flush with the edges of the image, then cut some gold glitter cardstock the same size and matted them together, offset. The greeting was stamped in Archival Cobalt onto a matching sheet of blue paper from the pack, then die cut with a small hexagon die. This also was matted onto glitter card, then trimmed down and mounted with a foam tab. 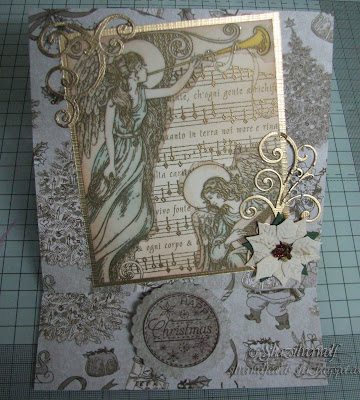 This is my favourite go to technique for this stamp, and was a design I saw in a magazine a lot of years ago. Firstly the image is stamped onto cardstock and heat embossed in gold again, then stamped again onto vellum, heat embossing in gold again.
Both pieces are trimmed down to the same size, and the vellum is torn down around the two angels.
Next I added Vintage Photo DI around the cardstock, then a little shading on the reverse of the vellum with Promarkers. That keeps it nice and subtle. It's such a detailed stamp, it needs the subtle treatment, it's easy to overpower the image- I had a couple of fails while doing this where just that happened. I'll show them at the end.😡
Next both pieces of vellum are attached to the relevant part of the cardstock image, and another light coating of Vintage Photo added over the top. You can add glue- either a liquid like Glossy Accents, or a snail type adhesive in small spots behind  the shading.
The whole piece was matted onto an embossed gold cardstock, and mounted onto the Easel card base, which I'd covered with a Brown version of the same Christmas pad paper. A couple of Flourishes die cut from the gold card added to opposite corners, and a white Poinsettia made from a Spellbinders die topped it off. The same sentiment as the first card was stamped in Archival Cocoa, die cut with a circle die. I cut a second piece, this time with a  scalloped die to mount it onto, then added to the card base with a foam pad. 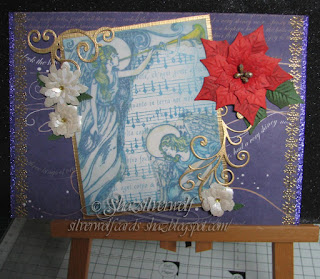 These two were made last year with the stamp, this time using Brilliance Pearlescent Sky Blue, and the same technique.

Both were easel cards. 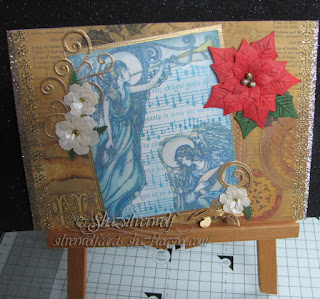 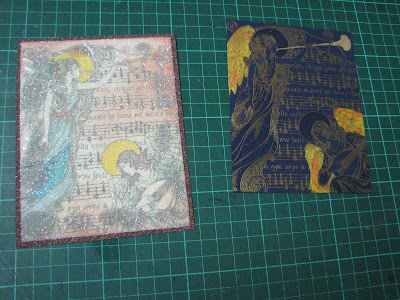 I said I'd show you my fails!
On the left, I tried covering the image with double sided adhesive sheet and Glamourdust, funny thing is, in this picture it doesn't look too bad, but in reality, much of the detail of the stamp is lost, it just looks blurred to the naked eye.

On the right, I thought I'd try adding Gilding flake to the wings. Another fail. It looked terrible, so I went over it with a gold metallic marker, which just made it worse rather than better. I should have used some sheet golf leaf, rather than the loose stuff I think.
By shazsilverwolf - February 04, 2018

Absolutely beautiful Shaz that really is the most amazing stamp and I love the cards you have made...really stunners in both tones...xxx

What beautiful stamps Shaz. They really have made amazing cards. Never heard of Circa stamps, but them I'm so behind these day with everything. Hope you're well. Hugs Rita xxxx

You've been busy! Stunning cards and I love the stamp. Love all the different ways you've used it too. Zoe x

Hi Shaz, what absolutely stunning cards, it's a fabulous stamp and I love the different ways you've used it, hope you are well, Kate x x

This is a fabulous stamp Shaz and looks so different just by using different inks and embossing powders.. Christine x

Wow, both of these cards are so gorgeous. Looks beautiful in each of the color combos you've showcased, and that is such a detailed stamp. It looks as though it would be tricky to get a good sharp stamping, but you've succeeded on each technique you've done. It was so interesting to read the details of the creation process, and some of these older stamps, were much more intricate than the acrylic ones we are seeing today. I appreciated your sharing of your 'fails', as I do that as well. It helps another crafter to see what 'didn't work', but your photos do show these as being so pretty. The gold flake leaves really shine, and the adhesive sheet with the glamour dust covering sounds like the glitter ritz I sometimes use. (and did with today's card). Looks very ethereal in the photo, and bet it isn't really the 'fail' you think it to be! TFS & Hugs

Fabulous cards Shaz - I love that stamp - its a real beauty and you've used it very well! Hugs rachel x

This is a gorgeous stamp Shaz and I love how you have made it look so different in each of the cards, just fabulous.
Lorraine

These are real beauties. I love the richness of the dark blue one. all so elegant looking. hugs Mrs A.

What gorgeous cards! i like both versions of this beautiful stamp. The blue is majestic but the ivory coloured one with the velum overlays is my fave. It is so delicate and regal! Love it...

Stunning cards, Shaz. It's a fabulous stamp and isn't it good to be able to get your money's worth out of just one stamp too? What are you trying to do to me??? Here's me trying to be good and not add any more stash to my already stuffed to the ceiling room and you direct me to a seller with all sorts of lovely stamps. They've even got Woodware - I lovely Woodware as much as I love chocolate! Hugs, Elizabeth xx

I even have a set of Woodware stamps - birthday greetings. Oh, my, every one of your cards are gorgeous. xoxo

Gorgeous cards Shaz, what a beautiful stamp...love your designs too. Carol x