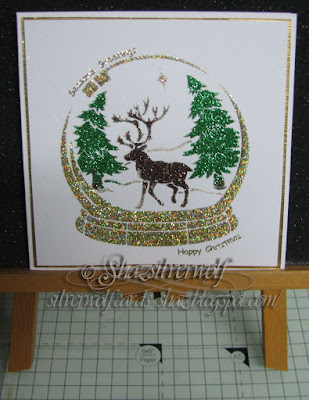 This is my first time at The Christmas Card Club, and my offering for the theme of Reindeer.

I wanted to try out using multiple colours of glitter on the wet paste, so stencilled a couple of images in case one went wrong. I also flipped the stencil, so the reindeer faces the other way. 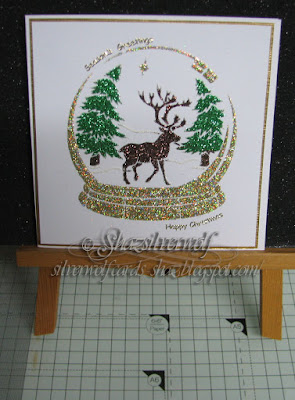 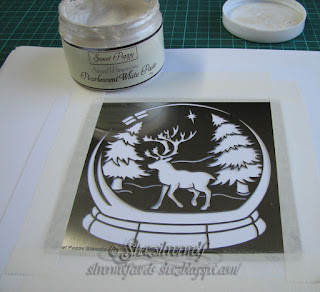 I used a Sweet Poppy stencil, called Caribou Snow Globe, teamed with their own PearlWhite Stencil Paste. Since I started using Lucy's instruction of 6 pieces of masking tape- 2 at the bottom, two at the top, and one either side, I've had no disasters when applying the paste.

By the way, the cardstock is Clarity Stencil Card, 7" square. 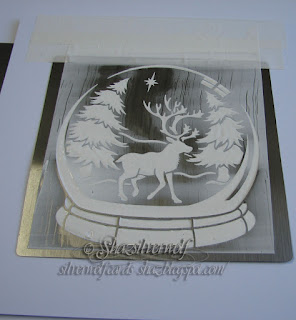 Removing the bottom two pieces, then the side two to leave the top ones as a 'hinge' to lift your stencil away from the paste. 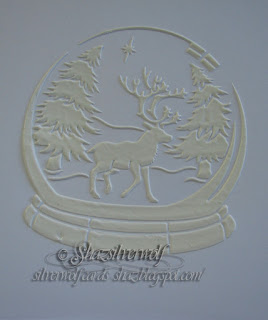 All goes well, apart from catching the paste slightly just on the lower left of the image. Note to remember: Do NOT wear a bracelet with any dangling pieces!
In this case, as I'm intending to cover it with glitter, it doesn't matter, as it won't show. 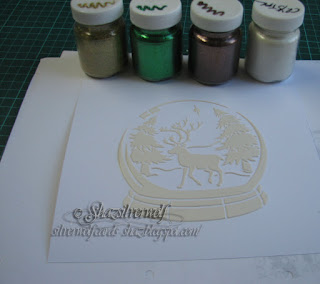 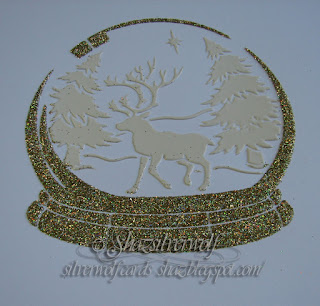 I've done the gold first, so that the following colours won't stick to the Globe. 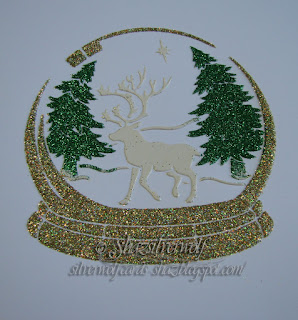 Next came the trees, and I ended up getting green on the snow,as well as down the trunk of the tree, followed by the Crystal on the snow lines. 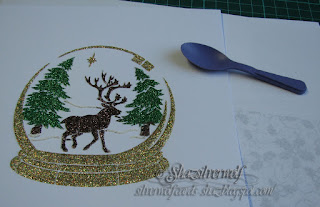 Finally, the brown on the reindeer. The little purple spoon is what I was using to sprinkle the glitter from. Anyone who saw my posts earlier in the year will recognise the spoons I was saving from Easter Eggs. 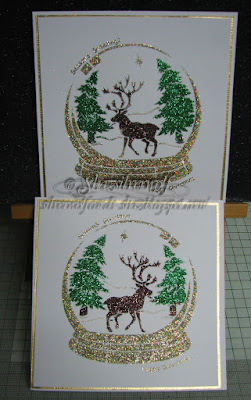 Then I trimmed each image down, matted onto some gold card, and attached to a 5" square card blank.
For the sentiment, instead of stamping, I thought I'd use some peel offs, I have loads and they need to be used up! I have some very small Christmas words, and added these on the top left and bottom right of the Snow Globe.

I could have done this more easily if I'd let the paste dry, then used glue to add the glitter afterwards, I think. Trust me to do things the hard way!

Hi Shaz
This is fabulous... love the stencil and the colours... stunning
Hugs Sylvie xx

Hello Shaz and welcome to CCC - I love your first make - that stencil is beautiful and you used the glitter so very well! Brilliant! Hugs rachel x

Hi Shaz...glad you got sorted ..sorry I was out earlier and didn't get your message.These are great,I love stencils and dimensional paste,and using multiple colours looks stunning.Enjoy the rest of the weekend xxxx

Both cards are gorgeous Shaz, thank you for joining in my challenge this week. I love the way you have used the different coloured glitters to create this wintry scene, beautiful.
Lorraine

Well done with the glitter...only getting it where you wanted...WOW!...these turned out really pretty. Love the stencil you used.

Great cards Shaz. I haven't used stencils too many times but I have to admit yours are much better than the ones I did. I love the snowglobe effect and the different glitters you used. Christine xx

Amazing look with the paste and glitters. (I even liked the look before you added the glitters too). It's quite a detailed stencil, and I can just imagine adding the different layers of glitter was quite fiddly, but you've done a lovely effort with this. Enjoyed reading the adventures in the creation (and none of the mishaps showed!). It's a beautiful reindeer either way he's standing! Wonderful job, and perfect to meet Lorraine's Reindeer challenge! TFS & have a great week ahead.

So pretty and sparkly! I'd totally do it the hard way myself... ;)

Trust me to be late on your first entry with the CCC. I do apologise.
These are super globes. I was going to ask how you have stuck the glitter on but your last part of your post tells me. I think I would let it dry too and apply with glue. I use stick on sentiments for almost all my cards. They are so time saving and look great and if your careful you can reposition too if in the wrong place first time round! Hugs Valery (aka Mrs A.)